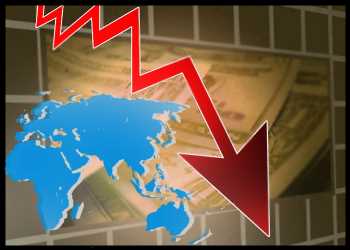 Asian stock markets are trading mostly lower on Thursday, following the broadly negative cues overnight from Wall Street, on a drop in crude oil prices and as traders are concerned about the near-term outlook for the markets and economy following recent volatility amid concerns about inflation and reports showing a rise in coronavirus cases in several countries in the region and Europe. Asian markets closed mostly lower on Wednesday.

The Australian stock market is slightly higher on Thursday after being in the green at open, recouping some of the losses in the previous four sessions, with the benchmark S&P/ASX 200 just below the 7,400 level, despite the broadly negative cues overnight from Wall Street, as traders picked up socks at a bargain after the recent losses.

Strength in mining and technology stocks are partially offset by weakness in financial and energy stocks.

Among major miners, Rio Tinto and OZ Minerals are edging up 0.5 percent each, while BHP Group is gaining almost 1 percent. Mineral Resources is declining more than 4 percent and Fortescue Metals is edging down 0.3 percent.

Oil stocks are mostly lower. Origin Energy and Santos are losing almost 1 percent each, while Oil Search and Woodside Petroleum are slipping more than 1 percent each. Beach Energy is edging up 0.4 percent.

Among the big four banks, Commonwealth Bank, ANZ Banking and National Australia Bank are relatively flat, while Westpac is edging down 0.4 percent.

In the tech space, Afterpay and Zip is losing more than 1 percent each, while WiseTech Global is gaining almost 1 percent and Appen is adding almost 2 percent. Xero is flat.

Gold miners are higher. Gold Road Resources, Newcrest Mining and Northern Star Resources are gaining more than 1 percent each, while Resolute Mining is adding more than 2 percent. Evolution Mining is surging more than 8 percent after announcing an agreement to acquire the Ernest Henry copper-gold mine in Queensland from Glencore for $1 billion.

Share in Aristocrat Leisure are slipping almost 5 percent after the poker machine giant reported a 40 percent drop in net profit after tax from last year when it was bolstered by a $1 billion tax benefit. However, revenue jumped 14.4 percent.

In the currency market, the Aussie dollar is trading at $0.727 on Thursday.

The Japanese stock market is significantly lower on Thursday, extending the losses in the previous five sessions, with the benchmark Nikkei 225 falling below the 29,500 level, following the broadly negative cues overnight from Wall Street, with weakness across most sectors.

In the tech space, Advantest is losing almost 2 percent, Screen Holdings is edging down 0.2 percent and Tokyo Electron is flat.

The major exporters are mostly higher. Panasonic, Sony and Mitsubishi Electric are edging up 0.2 percent each, while Canon is edging down 0.3 percent.

Among the other major losers, Eisai and Kawasaki Kisen Kaisha is plunging more than 7 percent each, while Impex is declining almost 6 percent and Nippon Yusen K.K. is losing more than 5 percent. Mitsui O.S.K. Lines is down almost 4 percent and Seven & I Holdings is slipping 3.5 percent, while Kyowa Kirin, Dowa Holdings and Idemitsu Kosan are sliding more than 3 percent each.

Conversely, CyberAgent is surging more than 7 percent and Rakuten Group is gaining more than 3 percent, while Dai Nippon Printing, Nexon Recruit Holdings, and Sumitomo Electric Industries are up more than 2 percent each.

In the currency market, the U.S. dollar is trading in the 114 yen-range on Thursday.

Elsewhere in Asia, Hong Kong is losing 1.4 percent, while New Zealand, China, South Korea, Indonesia and Malaysia are lower by between 0.1 and 0.5 percent each Taiwan is bucking the trend and is up 0.2 percent. Singapore is relatively flat.

On Wall Street, stocks saw modest weakness during trading on Wednesday, giving back ground after ending the previous session mostly higher. Selling pressure was somewhat subdued, however, limiting the downside for the major averages.

Meanwhile, the major European markets turned in a mixed performance on the day. While the U.K.’s FTSE 100 Index slid by 0.5 percent, the German DAX Index closed just above the unchanged line and the French CAC 40 Index inched up by 0.1 percent.

Crude oil prices declined sharply on Wednesday as data showing a larger than expected drop in gasoline stocks last week led to speculation the Biden administration might consider releasing more oil from emergency reserves. West Texas Intermediate Crude oil futures for December ended down by $2.40 or about 3 percent at $78.36 a barrel, the lowest settlement in more than a month.