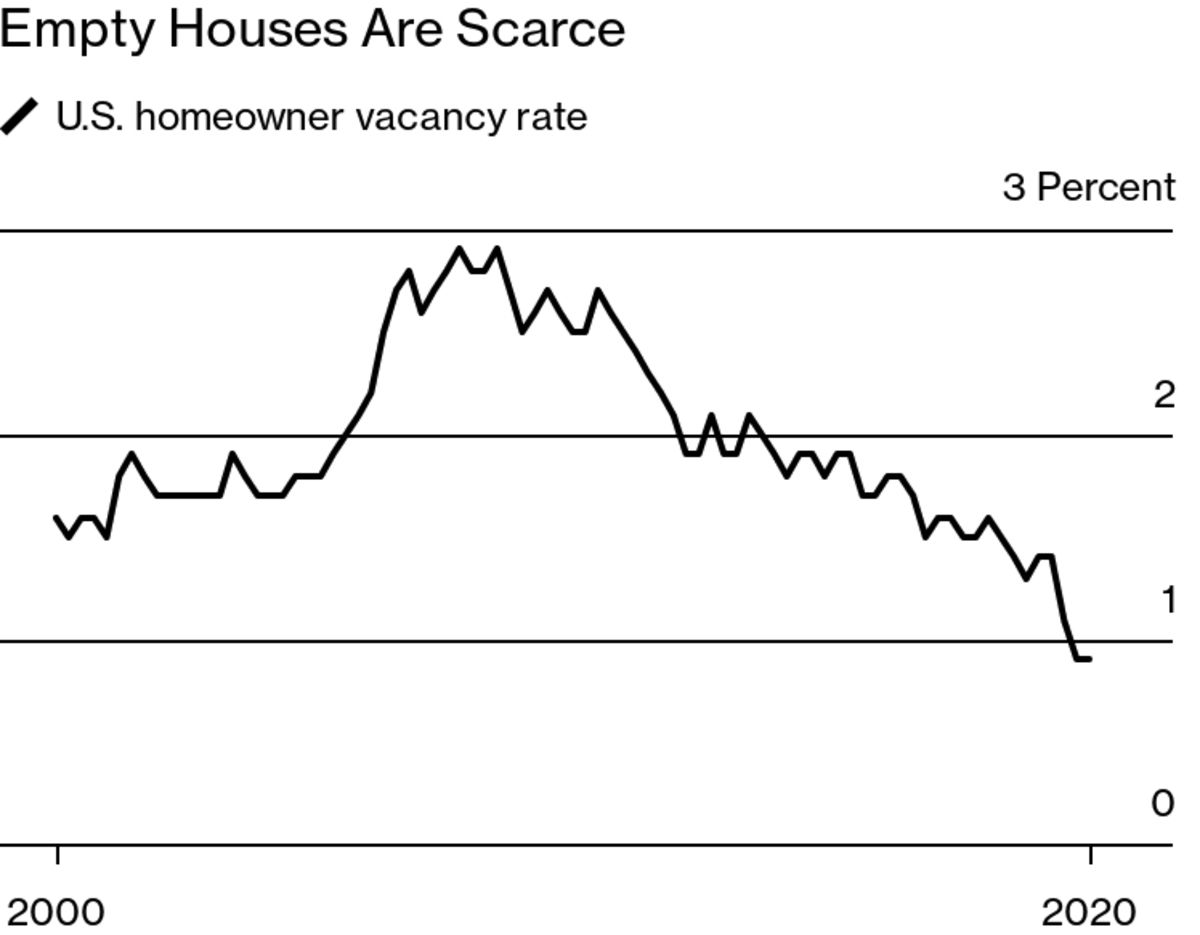 American housing is often lumped in with Bitcoin and Tesla Inc. as a bubble market. True, prices have risen sharply. The median sales price of a previously owned single-family house in the U.S. reached $314,300 in December, up 93% in 11 years, according to the National Association of Realtors. But this chart shows that the force behind the price rise is a supply shortage, not a speculative frenzy.

The peak of the homeowner vacancy rate, at just shy of 3%, was 2007-08, when there really was a bubble in the market. Builders were putting up houses faster than the U.S. population could form households to occupy them. It took awhile, but eventually prices plunged, people defaulted on their mortgages, and the U.S. economy crashed, helping bring down the global economy with it.

Today’s situation couldn’t be more different. The homeowner vacancy rate is 0.9%, equaling the lowest in U.S. Census Bureau records going back to 1956. In other words, there’s a shortage of houses this time, not an excess.

To be clear, this is nothing to be happy about, even if current homeowners are pleased to see their equity growing. Affordability is falling, especially for first-time buyers. A shortage of affordable places to live is unfortunate. “Today’s market is unhealthy,” National Association of Realtors chief economist Lawrence Yun told Bloomberg.

But it’s not the telltale sign of a bubble. Ask Laurie Goodman, a veteran housing analyst who spotted the last housing bubble when she was head of global fixed-income research at UBS, the Swiss bank, from 2004 to 2008. She’s now director of the Urban Institute’s Housing Finance Policy Center.

“I don’t think we’re in a housing bubble,” Goodman says. Homebuilders turned ultracautious after the last housing bubble popped, and they are even now, she says: “We’re actually producing less units than the rate of household formation each year.” (She’s speaking of the net increase in units after subtracting houses that are torn down or otherwise become uninhabitable.)

Says Goodman: “We’ve got a supply/demand imbalance, and we’re slowly, slowly moving to correct it, but we’re still in a deficit position.”

This past August and September the inventory of previously owned homes for sale tied its lowest level relative to the pace of sales in records going to 1963. There were only enough houses on the market to cover 3.5 months of sales, assuming no more houses were built, according to data collected by the Census Bureau. The inventory rose a bit after September, but the July-November average was still lower than in all but six months since 1963.

One factor in the strong demand is the pandemic, which has a lot of people looking to live in houses rather than apartments. An even bigger factor is cheap loans. Mortgage rates have fallen so much that average monthly payments have declined over the past year despite the rise in prices, she says.

True, if mortgage rates start moving back up, houses would become less affordable, but two points on that. One is that most people have fixed-rate mortgages, so they’re insulated. According to the Mortgage Bankers Association, in the week ended on Jan. 15, only 2.7% of newly originated mortgages by volume and 7.6% by value had adjustable rates. The second point is that interest rates probably won’t go up unless the economy strengthens, which would offset the pain of higher mortgage rates.

Mortgage underwriting got so sloppy during the housing bubble that some lenders were giving out “ninja” loans—no income verification, no job verification. Now, says Goodman, “underwriting is very, very strict, and it’s gotten stricter.” First-time buyers have the hardest time with underwriters because their purchases tend to be smaller and they require more handholding. Banks find it more profitable to focus on refinancing loans of existing buyers, she says.

Bubble theorists say the market could crash when foreclosure protections expire, considering that 1 in 10 homeowners with a mortgage is behind on payments, according to the U.S. Department of Agriculture. As one of his first acts in office, President Biden asked federal agencies to extend their foreclosure forbearance programs through the end of March. Even assuming that Biden doesn’t extend forbearance again, there’s no reason to expect a wave of foreclosures in April, says Goodman, because most homeowners have accumulated substantial equity in their homes, so they could sell them and pay off their mortgages in full with no sweat. That wasn’t the case last time around, when the fall in prices caught people off-guard with big mortgages and little or no equity.