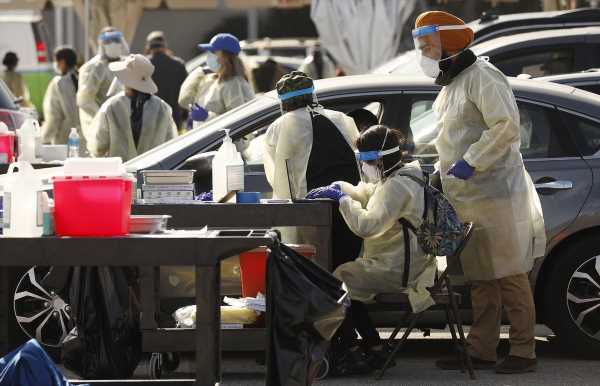 U.S. taxpayers have spent at least $12.4 billion for private companies to develop Covid-19 vaccines. Now they’re turning to an army of hypodermic-wielding volunteers, some with little practical experience, to help immunize 330 million Americans.

New York Governor Andrew Cuomo is relaxing rules to allow podiatrists, dentists and pharmacy students to give shots. In Colorado, Governor Jared Polis is asking for help from chiropractors and optometrists. Connecticut, Massachusetts and New Jersey are recruiting health-care retirees to fill shifts at stadiums, vacant department stores and other spaces repurposed as government-run vaccination megasites.

“This is about saving lives,” said Joseph DiVincenzo Jr., the head of Essex County, New Jersey, government. “These people are coming out and being part of history.” He said at least 1,500 people have signed up for vaccination duty via his county’s Medical Reserve Corps, part of a network of about 800 U.S. volunteer call-up groups established after the Sept. 11, 2001, terrorist attacks.

Record numbers of coronavirus patients are overwhelming the U.S. medical system, leaving few vaccination-certified doctors, nurses and others available for extra duty. At the same time, the U.S. Centers for Disease Control and Prevention’s public-health preparedness and response funding in 2020 was $850 million, a 50% drop from a decade earlier, according to the Trust for America’s Health, a Washington-based nonpartisan research group.

“Now we see what happens when an infectious disease crashes your economy and runs up trillions of dollars in costs because we try to do public health on the cheap,” Georges Benjamin, a physician and executive director of the American Public Health Association, a Washington-based nonprofit research and advocacy group.

Benjamin and other health experts say trained volunteers are crucial to the biggest vaccination effort in U.S. history. But some worry about weaknesses in an approach that relies so heavily on unpaid labor.

The process is intricate. The Pfizer-BioNTech and Moderna Inc. vaccines require two doses, 21 to 28 days apart, via an injection to the deltoid muscle of the arm. On site, recipients are screened for any history of vaccination reactions and counseled on potential risks if they have weak immunity. Administrators draw the substance from a vial, mix with saline, transfer to a syringe and select a needle with length and gauge appropriate for age and weight.

In a 25-page guide distributed by Minnesota health officials, injectors are instructed to sanitize the skin and insert the needle smoothly and quickly at a 90-degree angle. “Hold the syringe steady once the needle is in the tissue; moving it around the tissue may cause cause damage,” it warns. “Apply a bandage at the site if bleeding occurs.”

In the event of a severe reaction, vaccinators should be prepared to perform cardiopulmonary resuscitation, give an epinephrine shot and maintain an open airway.

Federal health-emergency training in recent years has centered not on vaccinations, but on fast distribution of oral medicine in the event of bioterrorism, according to Bob England, a physician who retired in 2018 as health director in Maricopa County, Arizona, which encompasses Phoenix.

“The problem with this is it’s been so long, and it will be so enduring, that I can see the pool of volunteers getting worn out,” England said by telephone.

States vary on certification requirements for intramuscular injections, but the vast majority of those permitted are doctors, nurses and pharmacists. In some states, medical assistants can give doses, but only under a physician’s supervision and in a clinical setting. Connecticut, Colorado and Nevada in recent weeks permitted veterinarians to volunteer.

Some state officials are dangling rewards as incentives to volunteer. The University of Wisconsin is offering $500 tuition credits to 4,000 nursing students. In Orange County, California, volunteers who work at least 40 hours can get early access to shots for themselves.

In November, more than two weeks before the vaccine was available, Indiana health officials turned to the state university’s medical school for volunteer shot-givers. About 430 students signed on for 90-minute programs that included a video and lessons with fake arms at the school’s technology-driven Simulation Center.

“The medical students have all gone through anatomy class — that gives them a big step up,” Dylan Cooper, a physician and clinical emergency medicine professor who led the training. “Both my vaccinations came from medical students I had trained.”

In New York City, 13,000 Medical Reserve Corps volunteers are covering more than 1,000 shifts, according to Julia Morrill, a health department spokesperson. Their duties include vaccinating, directing crowd flow and providing mental-health support, she said in an email. Volunteers are offered the vaccine.

Formulas by Pfizer and Moderna were approved in December, and to date more than 17.2 million doses have been administered in the U.S. Anthony Fauci, the U.S. infectious-disease chief, on Sunday said approval is imminent for vaccines made by Johnson & Johnson and AstraZeneca Plc.

President Joe Biden has proposed nearly doubling vaccination-distribution funding to $20 billion, and administering 100 million doses of Covid-19 vaccine in his first 100 days in office. Aftab Khan, an internal medicine physician in Davenport, Florida, said the effort should include doctors’ offices and the National Guard, in addition to the Medical Reserve Corps.

“We need more trained vaccinators — not willy-nilly, anybody from the street,” Khan said in an interview. “People have to be trained for the unexpected adverse reactions.”

California on Sunday suspended the use of 330,000 doses from a Moderna batch after about 10 reports of severe allergic reactions at a San Diego vaccination site. On Wednesday, Erica Pan, a physician and state epidemiologist, said a review “found no scientific basis to continue the pause” and said the doses could be used.

Beyond reactions, people receiving shots also risk what medical professionals call SIRVA, or “shoulder injury related to vaccine administration,” caused usually by improper needle placement. The complication is rare, but the most serious cases can qualify for compensation from a $4 billion government vaccine-injury fund.

“The deltoid is a tricky muscle,” said Litjen Tan, a physician and chief strategy officer for the Immunization Action Coalition, a Saint Paul, Minnesota-based nonprofit group that works to increase vaccination rates. Pharmacists, who administer about one-third of the nation’s annual flu shots, typically get three days of training before they’re vaccine-certified, he said.

England, the former Arizona health official, has taken on vaccination shifts himself, surrounded mostly by other retirees who had administered shots for decades. The volunteers are getting the job done safely, he said, but their ranks are vulnerable, particularly as health-care workers are among the first to get the shots.

“You’re asking people — who you’ve told to stay home and shelter in place and get your groceries delivered and don’t go anywhere — to now step up and put shots in the arms of people who are actively caring for Covid patients,” England said. “It’s inevitable that some of them are coming through infected.”