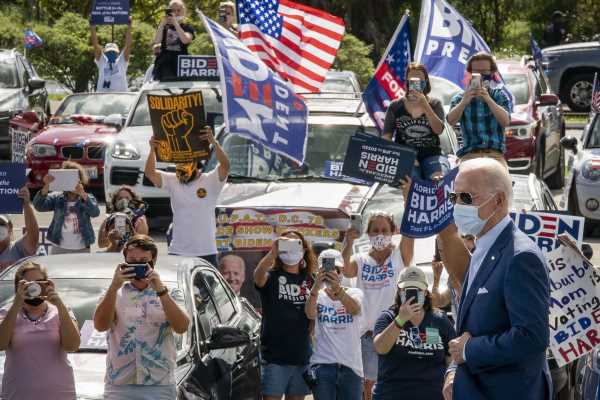 Democratic presidential nominee Joe Biden on Thursday appealed to Hispanic voters in Florida, a closely divided battleground state where a win next week would give him the presidency.

“The heart and soul of the country is at stake right here in Florida. It’s up to you. You hold the key. If Florida goes blue, it’s over,” the Democratic presidential nominee said in Coconut Creek in Broward County, which stretches south from Fort Lauderdale toward Miami and is a key source of Democratic votes in the state.

Although Biden has a 7.7 percentage-point lead nationally, according to the RealClearPolitics average of polls, he and President Donald Trump are essentially tied in Florida, which Trump won by just 1.2 points in 2016.

Biden pitched his remarks directly to the state’s Cuban- and Venezuelan-Americans, who Trump has sought to woo by casting the Democrat and his running mate, California Senator Kamala Harris, as socialists. But it’s Trump who “has embraced so many autocrats around the world,” Biden argued, and is “the worst possible standard bearer for democracy.”

With five days to go in the race, the Biden campaign is focused on turning out Black and Latino voters who, even with the growth in popularity of early voting this year, are still expected to vote in significant numbers on Election Day. The campaign has shown particular attention to trying to get out the Latino vote, which in Florida accounts for 17% of the electorate, as polling shows him doing slightly less well than the 66% Hillary Clinton scored nationally with Hispanics in 2016.

The campaign pointed out that Thursday was Latina Equal Pay Day, which highlights that Latinas make 54 cents to every dollar earned by the average White, non-Hispanic man. “Latinas know they deserve better – and that is why they are mobilizing, voting, and making sure their friends and family turn out at the polls,” Biden said in a statement. The campaign also planned an evening call to mark the day, hosted by Women for Biden.

Biden pledged that on his first day in office he would launch a task force to work to reunite more than 500 children with their parents, after being separated from them by the Trump administration in 2018. An ad attacking Trump’s policy and explaining the plan was to begin airing in Arizona, Florida, North Carolina, Pennsylvania and Nevada.

Biden urged his supporters to go to the polls for early voting through Sunday, to hand deliver their mail-in ballots or make a plan for Election Day, aware that high turnout in Broward could be the difference for him statewide. “You have a sacred duty, if I may say, and that’s to vote. It matters. Florida matters,” he said. “In these final days, stay empowered, stay optimistic, stay united. Make a plan and vote and help get out the vote.”

Biden’s second stop of the day is in Tampa for an evening drive-in rally a few hours after Trump held a rally there.

“President Trump’s super-spreader events — and he’s spreading more virus around the country and here in Florida today — he’s spreading division in addition, division and discord. We need a president that’s going to bring us together not pull us apart,” Biden said.