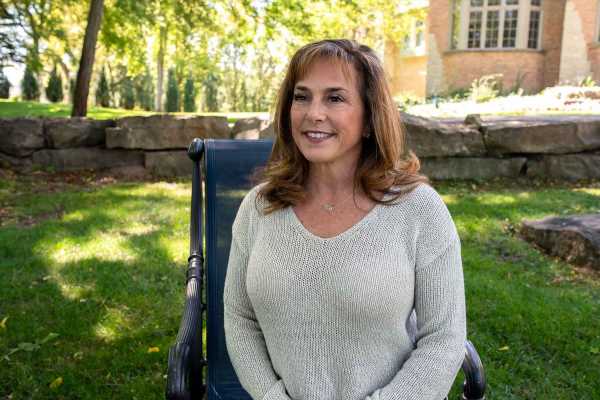 There were obvious reasons to doubt Republican Lisa McClain’s path to Washington during Michigan’s primary season: She’d never held elected office. Her top competitor had the support of the outgoing congressman she hoped to replace. State lawmakers, district Republican leaders, and Americans for Prosperity—an advocacy group linked to billionaire Charles Koch—all opposed her.

But McClain thought that in Michigan’s 10th District, which Donald Trump won in 2016 by 32 points, she could campaign as a conservative maverick, much like the president himself. A mother of four and a wealthy businesswoman, McClain grew up in the rural community of Stockbridge, Mich. After climbing the corporate ladder at American Express Co., in 1998 she helped found the Hantz Group, a financial-services firm in Michigan.

“What the president has taught us is we need some true conservative outsiders, and those people can do very well in politics,” she says. Her top issues include repealing the Affordable Care Act, building a wall along the Mexican border, and ensuring parents in Michigan have the right to choose whether or not to vaccinate their children. On her website, she calls herself “100% pro-life” and “a strong defender of the 2nd Amendment.”

McClain funneled more than $1.4 million of her own money into her campaign coffers and portrayed herself as a zealous defender of Trump and the values of everyday conservatives. On Aug. 4 she won the Republican primary, becoming a shoo-in for the district’s congressional seat.

After an abysmal showing for Republican women in the 2018 midterms—Democrats sent 105 women to Congress, while Republicans sent only 21—McClain is part of a wave seeking office this year. A record 227 GOP women have campaigned for seats in the House of Representatives, almost 100 more than during the party’s previous record-breaking year of 2010.

Some didn’t advance in their primaries, and others will fail to flip blue seats. But come January, it’s almost certain that there will be more Republican women in the House, and many will sound like McClain. On the whole, these politicians no longer fit the image long imposed on Republican women—that of the moderate consensus builder. These days, Republican women seeking office are warriors for hard-right politics. The shift predates Trump, but his style of conservative, populist rhetoric has turbocharged it.

If enough are elected, the new cohort of Republican women will bring a modicum of diversity to a party run largely by White men. But they aren’t likely to win over the more moderate women voters who polls indicate are fleeing the party under Trump. And once they get to Congress, don’t expect them to work with their sisters across the aisle, says Michele Swers, a political scientist at Georgetown University: “They’re going to want to be confrontational.”

Even 20 years ago, many conservative women in Congress were moderates who compromised with Democrats on such issues as abortion, health care, and education. They included Connie Morella, the Republican representative from the D.C. suburbs who throughout the 1990s opposed her party’s positions on abortion, gun control, and gay rights, and worked to expand the Violence Against Women Act in 2000. Maine Senator Susan Collins, elected in 1996, has been rated the most bipartisan senator for seven years running by Georgetown University.

But the archetype of the Republican female politician changed in 2008 with former Alaska Governor Sarah Palin’s entrance onto the national stage, political analysts say. When presidential candidate John McCain tapped Palin as his running mate, conservative women saw a pro-life, pro-gun, anti-establishment candidate in the spotlight.

“It is hard to overstate how impactful Sarah Palin’s vice presidential candidacy was for many conservative women,” says Melissa Deckman, a professor of government at Washington College who wrote Tea Party Women: Mama Grizzlies, Grassroots Leaders, and the Changing Face of the American Right. Palin inspired a generation of women to get into grassroots politics and “rebrand the party,” Deckman says.

Palin’s legacy is on full display in 2020. This year’s female candidates are more likely than before to describe themselves as “fighters” and use gun imagery in their campaign materials, while also making it clear that they are pro-life, pro-religion, and pro-Trump, according to an analysis by Kelly Dittmar, a political scientist at Rutgers University at Camden and research director of Rutgers’s Center for American Women and Politics. “If you look at most all of the Republican women running this year, they are very, very conservative,” she says. “That very much fits with the party as it is today.”

They’re women like Tiffany Shedd of Arizona, a youth pistol instructor who’s running on a border protection platform. Or Beth Van Duyne of Texas, a former Trump administration official and one of four Republican women candidates who last year proclaimed themselves “the conservative squad,” a rebuttal to Alexandria Ocasio-Cortez and her “squad” of progressive House Democrats. Or Marjorie Taylor Greene of Georgia, who has promoted the QAnon conspiracy theory and warned of an “Islamic invasion of our government.” President Trump has called Greene a “future Republican star.”

To win primaries this year, most Republican candidates tried to prove their conservative and pro-Trump bona fides—but especially women, whom voters tend to stereotype as more moderate than their male colleagues.

“The Republican Party overall is less welcoming to women candidates to begin with,” says Kathleen Dolan, a professor at the University of Wisconsin at Milwaukee who studies gender in politics. “I think they feel like they have to be really true believers to be noticed.” The National Republican Congressional Committee says it prioritized recruiting a diverse field this cycle, but there’s nothing on the right on the scale of the Democrats’ Emily’s List.

The moderate Republican woman isn’t quite extinct. Candidates in purple districts, such as Young Kim in Orange County, Calif., and Mariannette Miller-Meeks in Iowa, are running more traditional campaigns. Miller-Meeks, a doctor and Army veteran who’s focusing her message on health care, handily won her primary, but now she’s competing in one of the tightest races in Iowa. Kim, who has criticized the president for calling Covid-19 “kung flu,” is slightly trailing the Democratic incumbent, Representative Gil Cisneros, in polls.

Michigan’s deep-red 10th is different: The race is won and lost in the primary. When Paul Mitchell, the sitting congressman, announced he wouldn’t seek reelection, State Representative Shane Hernandez announced his candidacy. Hernandez embraced the promise of the American dream through his personal story of being a migrant worker’s son who became an architect. Later, Doug Slocum, a retired Air Force brigadier general, jumped into the race.

McClain saw an opening for someone with roots in the district and a background in business. Her strategy was to stake out a claim to the conservative-outsider mantle early and often. At a June roadside rally promoting President Trump, she gave a fiery speech about how she didn’t need a job as a career politician but wanted to go to Washington to stand up for her community’s values. “The beauty about me, ladies and gentlemen, is: I’m not beholden to anybody. Nobody. You know who I am beholden to? You, you, and you,” she said as she pointed to people in a crowd waving American flags and sporting MAGA hats. “That’s what you should demand from your politicians.”

The Republican establishment favored the conservative it knew over one it didn’t. Representative Mitchell endorsed Hernandez to take his place; so did Texas Senator Ted Cruz and House Minority Leader Kevin McCarthy of California. McClain received an endorsement from former Trump campaign manager Corey Lewandowski and very little in the way of contributions from Washington and outside groups. That meant she had to pour her own money into her campaign.

She spent it on TV ads that portrayed Hernandez as cozy with Democratic Governor Gretchen Whitmer because he negotiated with her over the state budget. Club for Growth Action, a super PAC that supported Hernandez, punched back with ads that questioned McClain’s true support for Republicans. The super PAC spent almost $1.6 million to help Hernandez, but McClain won the primary with 42% of the vote.

Republican women candidates often talk about their families but are less likely to discuss obstacles they may face because of their gender. (When Bloomberg Businessweek asked a handful of female GOP House candidates why there were fewer women Republicans running than Democrats, few offered concrete answers.) Research shows Republicans are less likely than Democrats to attribute the gender gap among public officeholders—women make up 24% of the current Congress—to discrimination or systemic barriers. Both groups may have a point: Evidence suggests women are less likely to run for office, but when they do, they win at similar rates to their male counterparts.

Michigan politics watchers say the 10th District was primed for a woman to win. Back in 2002 it elected Candice Miller as its representative in the House, and voters kept reelecting her until she stepped down in 2016. “It’s a district that has shown repeatedly that it values women in office,” says John Sellek, a Republican public-relations consultant.

The impact of McClain’s win could extend well beyond her district: No Republican holds a major statewide office in Michigan, leaving an opening for a symbolic leader and unofficial spokesperson, according to Sellek. “There has been a lot of talk and buzz about the new fresh face and her being the only GOP woman in Congress right now for Michigan,” he says. “She is going to be able to potentially step up into that role.” —With Bill Allison