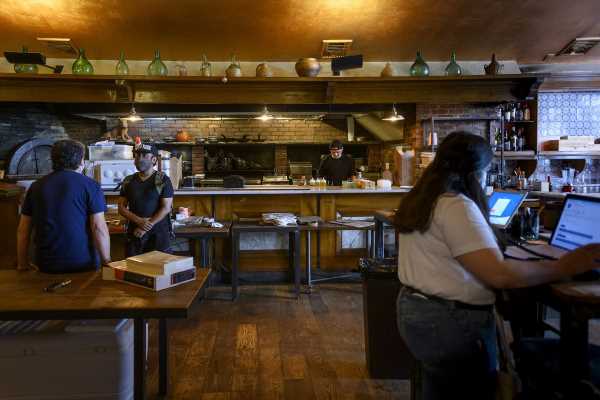 Editor’s Note: No city is more important to America’s economy than New York, and none has been hit harder by the coronavirus. “NYC Reopens” examines life in the capital of capitalism as the city takes its first halting steps toward a new normal.

It looks as if New Yorkers might have to wait a little longer to book a table inside their favorite restaurant.

As states across the U.S. experience an alarming surge of Covid-19 cases after reopening their bars and restaurants, Mayor Bill de Blasio and Governor Andrew Cuomo said Monday that officials are now considering slowing down the restart of indoor dining in New York City.

“Around the country, a number of cities and states have been moving in the wrong direction,” de Blasio said. “We all love indoor dining, but we see problems with indoor dining.”

A delay would be another blow to the city’s beleaguered restaurant industry, which has been gearing up for weeks to reopen on July 6. Its roughly 27,000 establishments have struggled to survive on takeout food and drink orders and, starting last week, limited outdoor seating since the pandemic began.

Here’s what restaurateurs across the city had to say about the news.

Emil Stefanov, general manager at Boucherie in the West Village:

“Yes, all the restaurants will be be suffering, but safety and health comes first. You’ll have no business if you have no people to have business with. Everything else goes after that. So if they tell us they’re postponing the resumption of indoor dining, I won’t think how bad it is for my business, I’ll think about how bad the situation is getting. In New York, I feel safe with the leadership. If they feel that it’s not safe to go to Phase Three, then who am I to say no? Businesses will come back eventually. Safety of people comes first.”

“We weren’t planning to open up in indoor dining even if approval went through, so we strongly agree. We don’t think NYC is ready just yet for indoor dining. We fortunately have front and back patios at our small bar, Leyenda, and have been making that work and offering to-go cocktails. It’s not great, but we’re surviving.

“Having folks pass through masked to get to the back patio or use the restrooms is one thing, but the thought of friends gathered at a table without masks seems like a risk we would not feel comfortable taking right now.”

“I wouldn’t say I was psyched about this news. We just started to hire people back. Now we’re pissing them off because we’ve made offers to people who didn’t want to get off unemployment, where they’re making more money. But they said yes. I hired another manager, I hired back a sous chef to help us be ready for indoor dining. Made offers to cooks and porters and servers.

“I have no problem with the government saying we can’t reopen, but they can’t change the message the week before. I’m taking on more payroll than I need to. I can’t survive until October. I understand the reasons why, but no one is communicating properly. I’ll be lucky if I make $1,000 off of outdoor dining this week. That’s how discouraging it is.”

“Obviously, it’s a blow to us; we had been excited about the prospect of reopening and did a lot of planning. It’s been tough to survive and do the right thing. This would have been a huge help, not just for us, but for all restaurants in New York. We’re very unhappy about not being able to, at least in a little way, reopen. I hope it doesn’t go into effect. We had made offers to people to come back. To go back and say, ‘Sorry guys, it won’t happen,’ … Of course, we care about everyone’s health. But it’s a blow.”

“The most important consideration right now is a potential second surge of infections coming to NYC, which would push many restaurants to a point of no return. With that in mind, I have always been of the opinion that a slower, more gradual reopening is the better way. Let’s stay the course, while the weather is warm enough to dine outside and until the virus is better contained. Opening restaurants indoors at 50% capacity has the potential to do more damage than good.”

“How much am I counting on Phase Three reopening and inside dining? Zero. I told all my employees, if it happens on July 6, that’s great, but chances are equally high it’s not going to happen then. How can I control that? There’s no way. So I need to count on what I can control. Up to last week, it was takeout and delivery that I could control. Then, it was putting the barriers in place last week, and making sure every guest is safe. When they tell me that Phase Three is happening, then I’ll start counting that in.

Amanda Cohen, chef-owner of Dirt Candy on the Lower East Side and Lekka Burger in Tribeca:

“As a restaurant owner, I am incredibly uncomfortable with opening up my dining room, and I can’t, in good faith, put any of my employees at risk just so that I can bring in a few dollars. New York has done a good job with its long game in dealing with the virus, which will have been for nothing if we start to play the short game.”

“The government shut down business for the safety of everyone. I respect that. Then, they declare that restaurants should open for takeout and delivery. But there were no rules for wearing masks, for keeping my staff out of dangerous conditions. And this was when people were scared and running their Amazon boxes through the dishwasher.

“Whatever we’re asked, we do. But how am I supposed to support the 1,300 people that got laid off? How can I get them back to work? I’m worried about people who work for me who are going to run out of unemployment.”