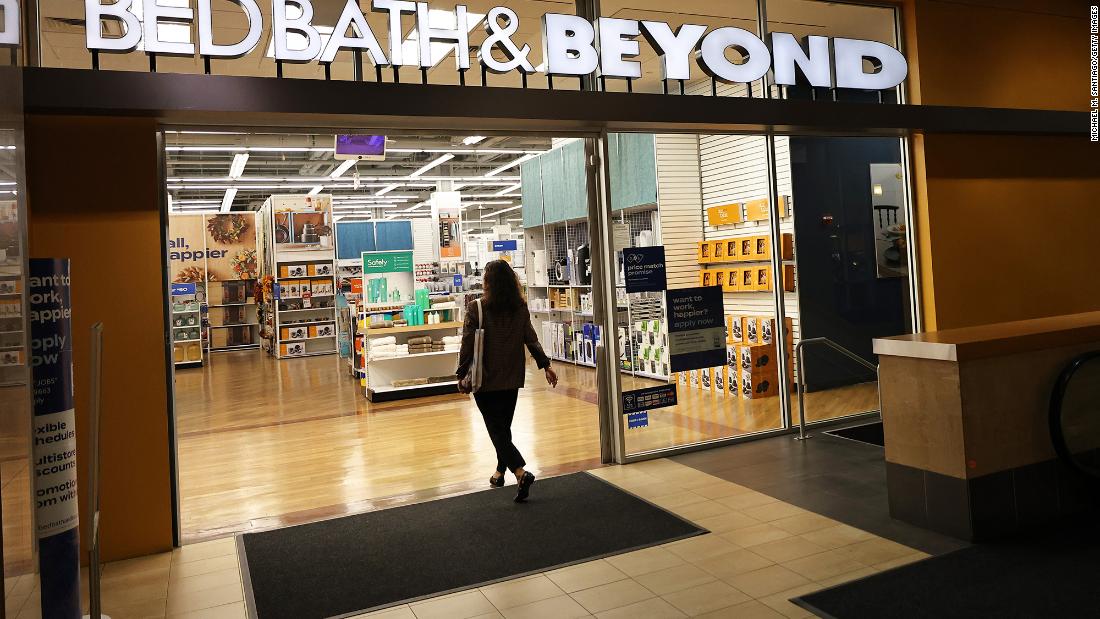 New York (CNN Business)Editor’s Note: This story is part of CNN Business’ Nightcap newsletter. To get it in your inbox, sign up for free, here.

Bed Bath and Beyond has always been a bit of a mess, and that was the point.

You walked in for new set of sheets and walked out with a closet organizer, an As Seen On TV abdominal roller and a 12-pack of clear glass food storage containers that were going to FINALLY level up your fridge game. And later, as you sipped a homemade cappuccino from your comically oversized porcelain mug — all courtesy of the BBBY — you’d remember you never actually got those sheets.

But these days, the store is something of a hot mess, literally, and that’s got analysts and investors nervous ahead of BBBY’s earnings report tomorrow.

Here’s the thing: A new report from Bank of America says some stores have cut their air conditioning and other utilities to quickly lower expenses and make up for a slump in sales — an accusation BBBY HQ denied. (A rep told my colleague Nicole Goodkind that no stores were “directed to adjust their air conditioning and there have been no corporate policy changes in regard to utilities usage.”)
The heat isn’t BofA’s only concern. Analysts there have been dropping in on stores to get a read on what’s happening on the ground. It’s not looking great.

What’s next?
The BofA analysts expect Bed Bath & Beyond’s management will soon announce more store closures and halt openings of its Buy Buy Baby stores.
But it’s not all grim. Bed Bath & Beyond CEO Mark Tritton, who was previously Target’s chief merchant officer, instituted a massive turnaround plan when he took the reins in the fall of 2019, which included plans to close stores, clean out the C-suite and remodel about 450 stores to make shopping in-store less chaotic. (If you ask me, that takes out all the fun of getting lost in the labyrinthine aisles stacked with stuff.)
Of course, Tritton barely had time to order a new name plate for his office door before the pandemic threw the world — including the vast supply chains his company relies on — into upheaval.
“The turnaround is taking longer than expected,” Riley Securities analysts wrote, but “we think Bed, Bath & Beyond is heading in the right direction.”

Ernst & Young has been slapped with a record fine after regulators discovered that not only did some of its auditors cheat on their licensing exams, but that the firm knew about it for years and did nothing to stop it.
According to the SEC, a “significant number” of EY’s auditors cheated on the ethics portion (LOL) of the Certified Public Accountant test and other courses. The $100 million fine is its largest ever against an auditing firm.
“This action involves breaches of trust by gatekeepers within the gatekeeper entrusted to audit many of our nation’s public companies,” said Gurbir Grewal, director of the SEC’s Enforcement Division, in a press release. “It’s simply outrageous that the very professionals responsible for catching cheating by clients cheated on ethics exams, of all things.”

True story: This past spring, as I prepared for my first beach vacation in years, I ordered five swimsuits online with the intent of keeping one or two. I was busy, and who has the emotional energy to go to an actual store to try on the No. 1 most dreaded article of clothing money can buy?
Anyway, a few days later, the suits arrived and I prepared to send the rejects back. I ordered a return label online, but instead I got a message saying, more or less: Keep em! The store told me they’d refund me for the items but please, please, don’t send them back to us. (They of course remain in their packages in my closet, next to another bag of donations I’ve put off dealing with).
Here’s the thing: My story isn’t unique or new, but it’s becoming more common, according to my colleague Parija Kavilanz.
Some of the biggest retailers, including Target, Walmart, Gap, American Eagle Outfitters have said recently — and I’m paraphrasing here — that they quite simply have too much crap. Inventories are packed with workout clothes, jackets, hoodies, garden furniture, kids’ toys, you name it. And it’s costing those stores tons of money to store it all. Returns are just another mess literally piling onto those overstuffed shelves.
Why the glut?
Stop me if you’ve heard this one: Supply chains are a mess. Still.
Retailers that rushed to restock high-demand items may have found that demand has cooled by the time the items actually arrived. Consumers behavior is also shifting: We’re spending less overall — thanks, inflation — and we’re spending less on goods than we did in the pre-vaccine days of the pandemic.
It’s simply too expensive to deal with returns, Burt Flickinger, managing director of retail consultancy Strategic Resource Group, told Parija.

“For every dollar in sales, a retailer’s net profit is between a cent to five cents. With returns, for every dollar in returned merchandise, it costs a retailer between 15 cents to 30 cents to handle it.”
Enjoying Nightcap? Sign up and you’ll get all of this, plus some other funny stuff we liked on the internet, in your inbox every night. (OK, most nights — we believe in a four-day week around here.)
Source: Read Full Article