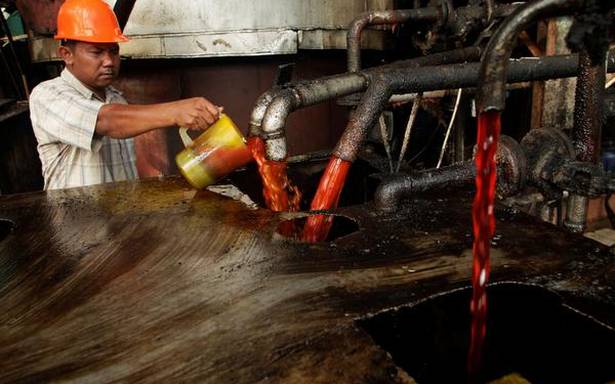 India can also increase its palm oil shipments from Indonesia’s rival supplier Malaysia, but it is unlikely to be able to meet the shortfall, the officials said.

The news from Indonesia pushed palm oil prices to arecord 5,228 ringgit ($1,248.63) a tonne on January 20, but Indian industry officials said the rally could be tamed if India, the world’s top edible oil importer, responds by reducing purchases.

There could be knock-on effects in other markets, however, including a boost to U.S. soy oil futures and sunflower oil prices in Black Sea region.

Crude palm oil (CPO) is being offered at around $1,410 a tonne, including cost, insurance and freight (CIF), in India for February shipments, compared with $1,450 for crude soy bean oil and $1,420 for crude sunflower oil, traders said.

A year ago the gap, between CPO and soy oil, often perceived to be of higher quality than palm oil, was more than $100 per tonne.

A shift in buying would take time to translate into deliveries.

India’s palm oil shipments for signed contracts are unlikely to be affected as many producers have operations in both Indonesia and Malaysia and they can change the country of origin for few shipments, Mr. Bajoria said.

Palm oil imports land in India three-to-four weeks after traders sign deals, but soy oil takes two months due to the longer voyage, a Mumbai-based dealer with a global trading firm said, asking not to be named because he is not authorised to speak to media.

Govindbhai Patel, managing director of trading firm G.G. Patel & Nikhil Research Company, said Indian buyers would shift to Malaysia, but added it did not have capacity to fulfill the gap created by Indonesia.

Mr. Patel, who has been trading edible oil for five decades, said India’s palm oil shipments could go down to 5,00,000 tonnes in February, while combined imports of soy oil and sunflower oil could jump to 6,00,000 tonnes.

While India buys palm oil from Indonesia and Malaysia, it mainly imports soy oil from Argentina and Brazil and sunflower oil from Russia and Ukraine.

Sunflower oil prices are very attractive for Indian buyers, but traders said they believed supplies from top exporter Ukraine cannot be raised beyond a certain limit because of geopolitical tensions, with Russia massing troops near the country’s borders.