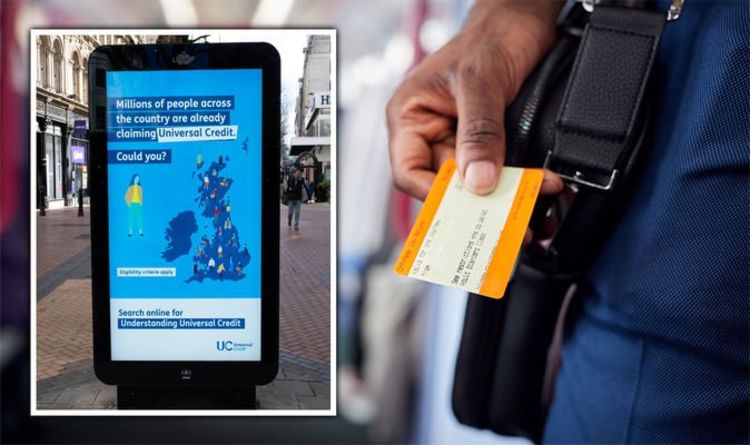 Universal Credit claimants and jobseekers can receive support for rail fares where certain conditions are met. This will prove to be especially useful as 2022 arrives and fares could be raised by nearly four percent.

Sarah Coles, a senior personal finance analyst at Hargreaves Lansdown, broke down what big changes may be on the horizon for the year ahead. Around March time, Britons may have to brace themselves for hiked rail fares.

She explained: “This is expected to be delayed from January, in the same way it was in 2021. It’s usually linked to RPI in July, which would put rises at 3.8 percent, and would mean a big hike in ticket prices.

“However, we’re yet to have confirmation of either the rise or the timing, because the Government keeps delaying the announcement.

“This makes life particularly difficult for people trying to plan their travel and monthly budgets for next year.

“It also makes it harder for people trying to make big and important decisions about their future. If you’re considering a move further from the office, or working from home for at least part of the week, it makes it much trickier to work out what that means for your finances if you have no idea what the commute will cost you.”

While raised costs will hit Britons hard in the new year, especially if they’re heading back to their offices, but support may be available.

National Rail offers a “Jobcentre Plus Travel Discount Card” which can cut travel costs in half.

National Rail explained: “This is provided to those unemployed claiming Jobseekers Allowance or Universal Credit for three to nine months (18-24 year olds) or three to 12 months (over 25s) can apply through their Work Coach and local Jobcentre Plus.

“Other benefit recipients may receive a Jobcentre Plus Travel Discount Card from three months of their claim and if they are actively engaged with a Jobcentre Plus adviser. Cardholders are entitled to a 50 percent discount on selected rail tickets.”

To see if one would be eligible for this, they will need to contact their nearest Jobcentre.

National Rail continued: “The rail industry is raising awareness of its Jobcentre Plus Travel Discount Card to help more people get back to work, as new figures show that take-up has dropped by nearly a third since the start of the pandemic.”

In November, employment figures were released which showed job vacancies hit record highs, which National Rail argued meant hundreds of thousands more could benefit and slash their travel costs as they search for their next opportunity.

It noted over 62 percent of journeys taken using the card are in London and the South East, contributing to the “lion’s share” of over £1.5million in savings made by jobseekers travelling by rail during the pandemic.

While the Omicron variant may have delayed the plans, Jacqueline Starr, Chief Executive of Rail Delivery Group, expressed her hope for how the support will help get workers back into the office where possible.

She said: “Over 700,000 journeys were made during the pandemic by people using the Jobcentre Plus Travel Discount Card but with the world of work opening back up and new opportunities becoming available, we want to encourage even more people to take advantage as they look to secure new jobs.

“The railway is a key part of Britain’s clean and fair recovery, and this discount card is yet another way that train companies are helping the country to bounce back.”

Minister for Employment Mims Davies also said: “We’re committed to breaking down any barrier preventing jobseekers from accessing the vital training and employment opportunities they need to get back in work and back on track.

“Through our multi-billion pound Plan for Jobs and the Jobcentre Plus Travel Discount Card, we’re helping jobseekers across the country to cut costs and raise their job prospects as we push to build back better.”

According to moneysavingexpert.com, all train operators in England, Scotland and Wales offer those with the “Jobcentre Plus Travel Discount Card” a 50 percent discount on anytime day tickets, off-peak day tickets and season tickets, for up to three months.

Additionally, the card also gets half-price single and return tickets on Stagecoach’s 6,500 buses across England, Scotland and Wales, excluding London.

Transport for London also accepts the card on all of its services including buses, trams, the DLR, the Tube and the Overground network and if they’re used with Oyster cards, additional discounts are available.