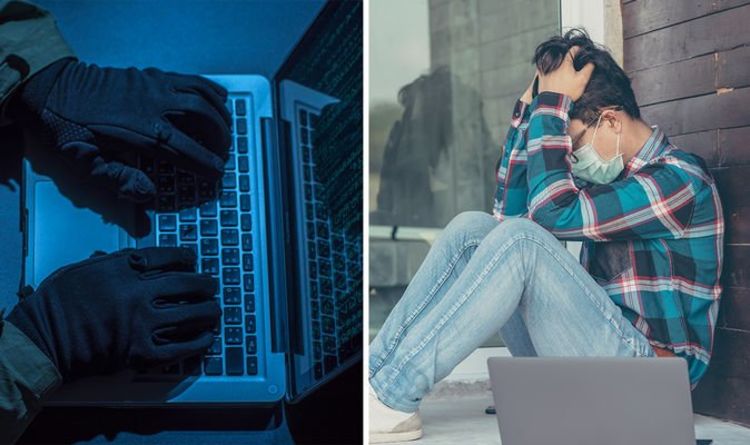 More than £2.3million has been lost in 2021 to online scams and fraudsters with 44 percent of Britons feeling more vulnerable to cyber threats because of the pandemic. Ms Rutherford shared her experience as well as the warning signs and signals consumers should always be on the lookout for.

Ms Rutherford, identity solutions expert at FICO, has been in the fraud industry for over 10 years and also worked as a marketing professional in the IT sector for almost two decades.

However, her expertise was still no match for the sly cybercriminals online.

With targeted remarketing ads, companies are able to showcase specific products to meet the needs of their consumers depending on their social media, search history and a variety of other insights.

Ms Rutherford found herself targeted by one of these ads, for a company called Comfort Now Shoes, which followed her for weeks and with an upcoming holiday she was eager to find a new pair of shoes.

She explained: “I followed the link and it looked like a perfectly normal website. I went and bought two pairs of shoes which cost about £58.

“I got an order confirmation on my email account and then they didn’t arrive.”

Slightly nervous about the situation, Ms Rutherford went back onto the company’s website and noted their incredibly long shipping time, which she later learnt was a large red flag she should have noticed.

Returning to the original website, Ms Rutherford found that the link was now sending her to Shopify, and Google search results for reviews of the company had no results.

Having realised it was a scam, Ms Rutherford opted to not report it, saying: “I just felt stupid and didn’t do anything about it. I could’ve claimed it back on my card. If I had reported it, that loss doesn’t go away, it’s just that the card issuer has to stump up the money rather than myself. The fraudsters have got what they’ve got.”

“I’m someone who has worked in the fraud industry for more than 10 years – often talking about scams. Of course, the warning signs were there, but my need had numbed the part of my brain that could see those signals.

“Last month I attended a fraud conference where speaker after speaker used the trope of the lonely, old woman as the victim of fraud. This compounds the idea that scams happen to other people – people that aren’t like us.”

She noted that if she were able to do it all again, she would have searched Google reviews for the company to see if it was a legitimate trader.

Ms Rutherford said: “It’s very difficult to tell the difference between what’s a scam and a trader that was set up to be legitimate but has gone bust.

“There are plenty of small traders running legitimate businesses and people are scared to use them. And those are businesses that are struggling to survive as well.

“A lot of people have been pushed to using online shopping for the first time and they’re at risk but sometimes it’s also the people like myself that think they know what they’re doing because actually they don’t.”

A big implication of being caught in a scam is not just the financial impact, but the societal backlash too.

Victims of scams, like Ms Rutherford, usually feel foolish and ashamed, making them less likely to report the crime or accept a poor outcome if they are offered restitution.

Additionally, Ms Rutherford noted: “I don’t think there’s anyone that could never fall victim to a scam.”

Generally, people who are overconfident about these types of situations will develop a false sense of security, ironically becoming more vulnerable to cyber criminals.

Ms Rutherford concluded: “Whether you’re young or old, male, or female, naïve or apparently knowledgeable, when our defences are down, we are all vulnerable.

“Understanding and believing that we could fall victim to scams is the gateway to being alert to the risk and accepting the education that banks and consumer organizations provide.”