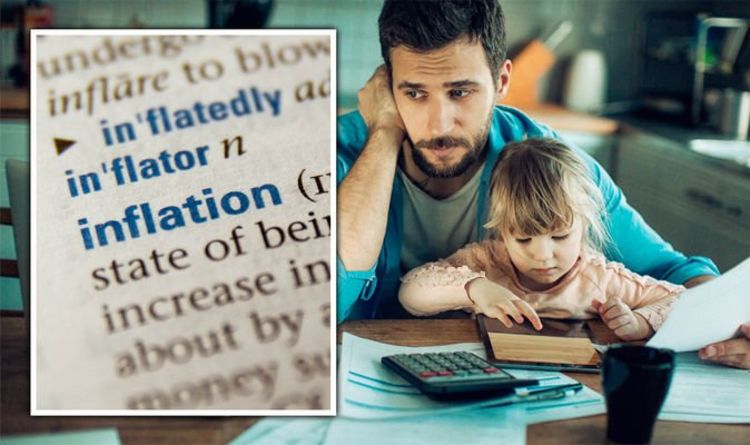 Inflation is currently sitting at 4.2 percent, more than double the Bank of England’s (BoE) target. With prices predicted to continue to rise into the spring, many expect the central bank will have no choice but to raise rates in its next review, which will be taking place on December 16.

Recently, Aegon warned the damaging effects of inflation on purchasing power is set to outweigh any small rises in interest rates on cash savings in the year ahead. With this in mind, the company urged savers with large amounts of money sitting in cash not to be “lulled into a false sense of security” if interest rates creep up, because of the threat of higher inflation throughout 2022.

This warning will need to be heeded by millions of savers, as the FCA recently suggested 8.6 million consumers hold over £10,000 investable assets in cash, which will deteriorate in spending power if no actions are taken over the coming months.

According to the Office for Budget Responsibility and certain members of the BoE Monetary Policy Committee, inflation is expected to average over four percent in the coming year, peaking at close to five percent in the spring. With this in mind, many expect the BoE to attempt to “dampen the effects” of soaring prices by increasing the base rate from the historic low of 0.1 percent. While this may offer some relief if passed on to savers, the average easy access savings account is currently sitting at just 0.19, and any upward change is expected to be small.

As such, the damaging effects of high and rising inflation will likely more than wipe out any uplift a higher interest rate will give to the value of cash savings.

Analysis from Aegon showed £10,000 saved in a cash savings with 0.5 percent interest will increase to just £10,050 over the course of the year. However, with inflation at four percent, this will be worth £9,663 in today’s money terms, reducing purchasing power by £337.

Recently, to combat the risk of inflation, the FCA set out plans to help rookie investors move their cash into the markets and additional calculations from Aegon showed how beneficial this could be.

Aegon showed that if the aforementioned £10,000 were instead invested, and achieved a moderate growth rate of 4.25 percent after charges, £10,000 could grow to £10,425 over a year. This would be worth £10,024 in today’s money terms with four percent inflation, just maintaining purchasing power.

Steven Cameron, Pensions Director at Aegon, commented on these results.

“People may have forgotten how damaging high inflation can be”

He said: “As the economy continues to recover post lockdown, we are seeing a sharp rise in the cost of living. Inflation is currently sitting at over four percent and forecasts suggest it could remain around this level or higher in the coming year, peaking close to five percent in the spring.

“During a period of high inflation people will notice a dramatic decrease in their purchasing power over time, particularly if their wages don’t keep pace or if they have savings in cash. The Bank of England may respond by hiking the base rate in the coming months, but even if passed on to savings accounts, any increase is likely to be small. Savers hoping for a boost to their cash savings should not be lulled into a false sense of security if interest rates, currently just scraping above zero, rise a little.

“The lurking threat of inflation next year and beyond could far outweigh any small changes in interest rates for those with large amounts of money in cash savings. Following many years of low inflation, people may have forgotten how damaging high inflation can be. But in the coming months and years savers should think carefully about where they put any additional cash that is not needed in the short term.

“The financial regulator, the FCA, has said it wants to explore new ways of supporting some of the 8.6 million people with more than £10,000 of investable assets in cash to consider moving some of this into investments to make their money work harder. Money in investments can benefit from growth which can outstrip the rising prices of goods and services, although this is by no means guaranteed. A financial adviser is best placed to recommend the best investment option based on each individual’s attitude to risk.”

Will the Bank of England act?

In recent months, BoE policymakers have hinted that interest rate hikes could be on the horizon. In early October, investors started pricing in a base rate hike to 0.75 percent before the end of 2022. In response to this Michael Saunders, an external member of the Monetary Policy Committee, said the markets could be making the right call.

Speaking with the Telegraph at the time, Mr Saunders said: “I’m not in favour of using code words or stating our intentions in advance of the meeting too precisely, the decisions get taken at the proper time.

“But markets have priced in over the last few months an earlier rise in Bank rate than previously and I think that’s appropriate.The February one is fully priced in and for December, it’s half priced in. I’m not trying to give a commentary on exactly which one, but I think it is appropriate that the markets have moved to pricing a significantly earlier path of tightening than they did previously.”

Additionally, in September, Felicity Buchan, the Conservative MP for Kensington, questioned members of the Monetary Policy Committee on when rates may be hiked. She said: “In our discussion on forward guidance and whether the threshold [for raising rates] had been met, you kindly gave us the information it was four to four. Do you mind telling us where you stand [today]?”

Andrew Bailey, the Governor of the Bank of England, responded: “I think we can do that. So my view was that the guidance had been met.”

Additionally Dave Ramsden, the Deputy Governor for Markets and Banking at the Bank of England, also said: “I gave a speech in July where I sort of flagged that I thought the guidance was close to being met.

“And by the time we got to the August round, my view also was that the guidance, which [as you know] was significant progress on eliminating spare capacity and sustainable return of inflation to target, had been met. But those were always necessary rather than sufficient conditions for tightening.”

However, while the BoE may have wanted to raise rates in the autumn, recent economic changes may have halted its plans. A combination of Omicron fears and rising house prices may mean rate hikes could be delayed into the new year.

Karen Noye, mortgage expert at Quilter, explained: “The latest Halifax data shows house prices have once again continued to rise over the past month, with November seeing a new average house price record of £272,992. Not only is this a new record price, but on a rolling quarterly basis, growth has reached a fifteen-year high with an uptick of 3.4 percent.

“At this stage, two months post stamp duty holiday withdrawal, it was hoped we might finally see a downtick in house prices. The still rising prices demonstrates that while the scheme did have an impact on house prices, it was not the only driver. The race for space appears to still be going strong, and when combined with the current demand outweighing supply, prices are still being pushed higher.

“Interest rates will be key over the coming months, and an increase would push mortgage rates up which will likely put potential buyers off. However, the new Omicron variant may have thrown a spanner in the works of any major changes planned by the Bank of England, meaning we are unlikely to see a rate rise just yet. While that may be the case, rock bottom mortgage rates are likely to creep up as an interest rate rise is still anticipated, it is just a question of when.”