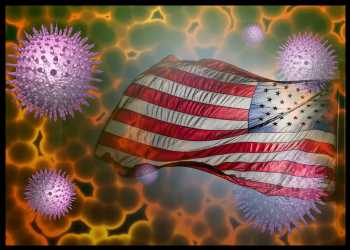 President Joe Biden warned that the Omicron variant of coronavirus will enter the United States, and is a cause for concern, but told the nation not to get panic over the possibility.

Providing an update about the new Covid variant first identified last week in Southern Africa, Biden said, “The very day the World Health Organization identified the new variant, I took immediate steps to restrict travel from countries in Southern Africa. But while travel restrictions can slow the speed of Omicron, it cannot prevent it”.

“Sooner or later, we’re going to see cases of this new variant here in the United States. We’ll have to face this new threat just as we have faced those that have come before it”.

He said his administration will fight this variant with scientific and knowledgeable actions, and beat it.

Quoting his Chief Medical Advisor Dr. Anthony Fauci, the President said he believes that the current vaccines provide at least some protection against the new variant and the boosters strengthen that protection significantly.

“We do not yet believe that additional measures will be needed. But so that we are prepared if needed, my team is already working with officials at Pfizer, Moderna, and Johnson & Johnson to develop contingency plans for vaccines or boosters if needed”.

Biden said he will also direct the FDA and the CDC to use the fastest process available to get such vaccines approved and on the market if needed.

He announced that on Thursday, he will put forward a detailed strategy outlining how his administration is going to fight Covid this winter — not with shutdowns or lockdowns but with more widespread vaccinations, boosters, testing, and more.

Biden compared the situation in the United States while entering the month of December to where the country was last Christmas.

“Last Christmas, fewer than 1 percent of American adults were vaccinated. This Christmas, the number will be over 71 percent, including more than 86 percent of seniors.”

“Last Christmas, our children were at risk without a vaccine. This Christmas, we have safe and effective vaccines for children ages five and older, with more than 19 million children and counting now vaccinated”.

“Last year, a majority of schools were closed. This year, 99 percent of our schools are open,” Biden said.

Despite the comparatively better situation, the pandemic still persists strongly in different parts of the country.

With 208745 new cases reporting on Monday, the total number of Covid infections in the United States rose to 48,440,107, as per the latest data from Johns Hopkins University.

This is the highest single-day infection toll recorded since January.

An additional 1963 Covid deaths on the same day took the total number of people who died due to the pandemic to 778,653.

Michigan reported the most number of cases – 27,734 – while Florida recorded most Covid deaths – 391.