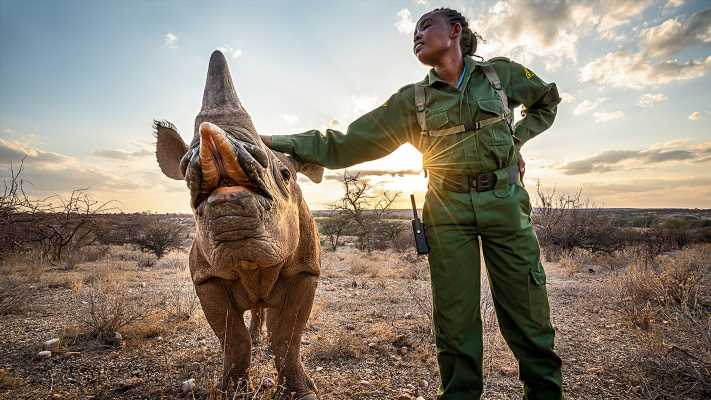 Non-profits continue to search for an effective way to stop illegal rhino poaching, which has left most of the species critically endangered.

“A biotech startup has managed to 3-D print fake rhino horns that carry the same genetic fingerprint as the actual horn,” the caption of an image shared May 27 on Facebook read.

The caption said the company, which they don’t identify by name, “plans to flood (the) Chinese rhino horn market” at a fraction of the cost of real rhino horns to force poachers out of business.

Fact check: No, email to Fauci doesn’t contain origin of a ‘coronavirus bioweapon’

The image shows two Thai Customs Department officials holding confiscated rhino horns during a press conference. It was taken in 2014 by the Associated Press.

Shared by a self-described positive news account, the image has received almost 20,000 shares since it was posted May 27. USA TODAY reached out for comment.

The technology exists, but this image being shared as current news doesn’t reflect the present reality.

While the post doesn’t directly identify what company purportedly created fake rhino horns with genetics similar to a real horn, USA TODAY found some claims led to reports about Pembient, a Seattle-based company.

A biotech company, Pembient announced its project to develop products “genetically and spectrographically similar to rhino horn” in 2015.

The process of creating the horn starts with producing a keratin protein-based powder, Pembient CEO Matthew Markus told CNN in 2015. That powder is then manufactured and shaped into a horn with 3D-printing techniques.

Keratin, a protein found in hair, fingernails and animal hooves, is one of the main ingredients in a rhino horn, according to the U.S. Fish and Wild Service.

The technology was developed with the goal of slowing down the illegal poaching of rhinos, which poses a threat to the five living rhino species.

Rhino poaching grew starting around 2010, and in 2015, a record 1,349 African rhinos were poached, according to an analysis by conservationist nonprofit Save The Rhino International.

Since 2015, the number of rhinos poached has consistently decreased. In 2019, the most recent year for which data is available, around 760 rhinos were poached.

The World Wildlife Fund said the decrease in South Africa, home to the largest population of rhinos, was the result of combined efforts from government, private and nonprofit partners, including stricter policing and educating the neighboring communities.

Fact check: No evidence Tim Tebow is wearing No. 85 to honor Aaron Hernandez

The sale of the horns was expected to begin in September 2016, CNN reported. But USA TODAY found no press releases or information about the horns ever reaching the market, and USA TODAY’s attempts to reach Pembient were unsuccessful.

The company was dissolved June 3 by the state of Washington because Pembient didn’t file its annual report before the due date of Jan. 31, official documents show.

Would it help reduce illegal poaching?

Rhinos are poached for their horns, which societies throughout time have used for traditional medicinal purposes and as a symbol of status.

The price of rhino horns in the black market varies widely, but rhino horns can cost up to $100,000 per kilo in Asian black markets, CNN reported in 2017. A horn can weight up to 8 pounds.

In 2016, Markus told the Woodrow Wilson International Center, a think tank in Washington, D.C., he hoped Pembient’s rhino horns would lead to a drastic decrease in poaching. Pembient said  45% of rhino horn purchasers would accept using lab-made horns, according to a survey it conducted in 2015.

But top rhino users don’t want fakes, according to Lynn Johnson, founder of nonprofit Nature Needs More, who spoke with The New York Times in 2019 after interviewing some of these buyers.

“Calls for fake rhino horn just shows that there’s a lack of understanding about the true commercial nature and consumer desire of current demand,” she told the Times.

Pembient was not the only one looking to develop convincing fake rhino horns.

In 2019, scientists at the University of Oxford in England and Fudan University in China created a fake rhino horn using horsehair.

The horn was created with horsehair because the animal is a close relative of rhinos, giving it a similar chemical composition. The hair used was glued together with a mix of regenerated silk that mimics a real horn.

These genetically similar horns could complicate policing and detection of real horns being smuggled, according to the U.S. Fish and Wild Service.

“If the real and synthetic products are visually and diagnostically indistinguishable, such production would create opportunities for laundering real wildlife products as cultured products, undermine educational efforts to reduce demand, and potentially introduce a new, broader consumer base for endangered species products,” the government agency wrote in a paper submitted at the 2016 Convention on International Trade in Endangered Species of Wild Fauna and Flora.

Another concern is that the fake horns could drive up the demand for real horns. The status that came with owning a real horn would increase as fake horns become commonly available to everyone, according to Save The Rhino International, which opposes the development and sale of synthetic rhino horn.

“Selling synthetic horn does not reduce the demand for rhino horn or dispel the myths around rhino horn and could indeed lead to more poaching because it increases demand for ‘the real thing,'” the organization said in a press release.

The claim that a company 3D-printed fake rhino horns and plans to combat poaching is PARTLY FALSE, based on our research. There was an effort along these lines, but the timeline presented in this claim is wrong. The claim has been around since at least 2015, when Pembient started working on the technology. But the company has since been dissolved, and we couldn’t find evidence its horns ever reached the market. Because the image was posted after Pembient’s efforts ended, the claim that the company “plans to flood the Chinese rhino market” with its fake rhino horn is incorrect.