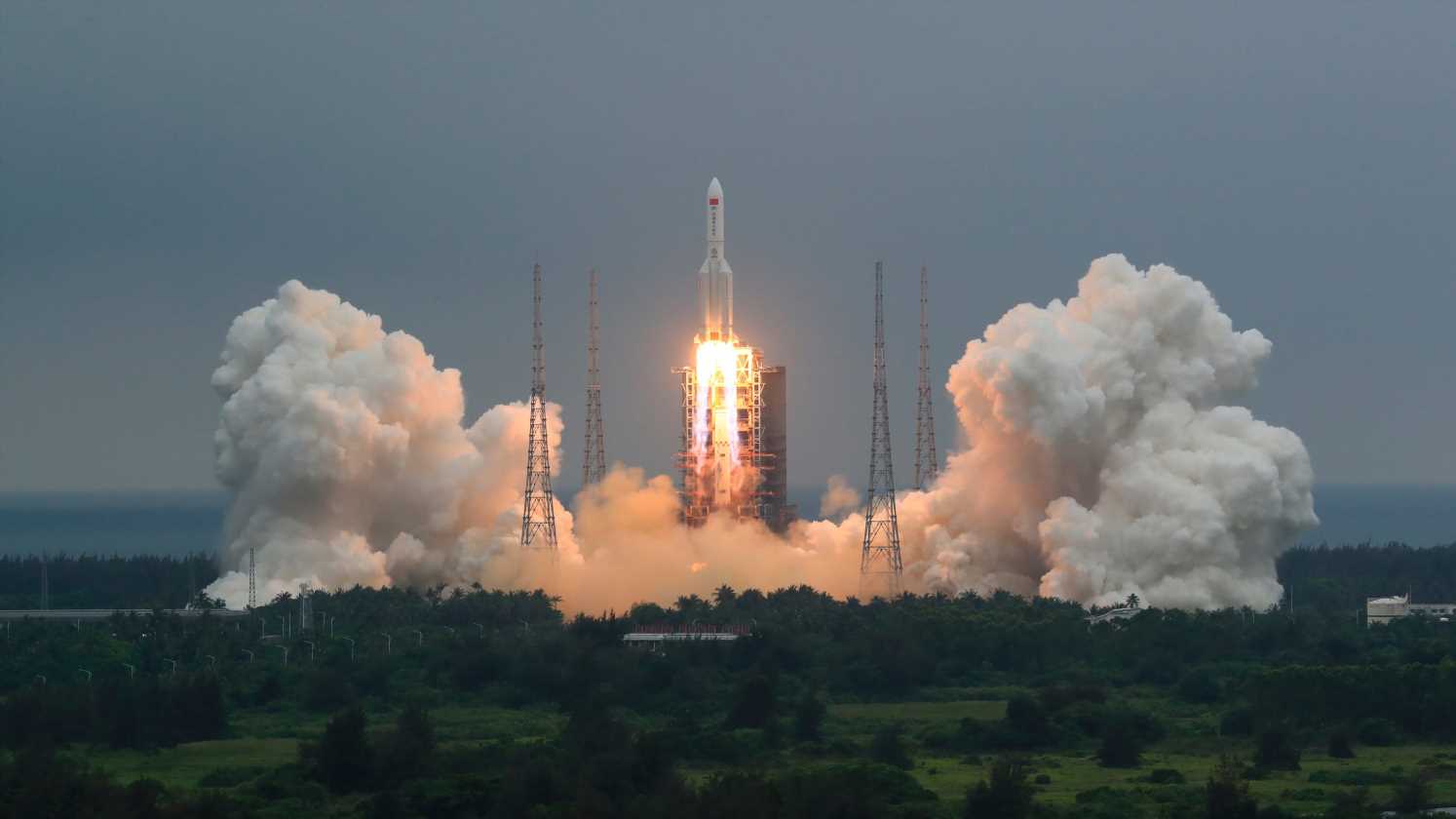 After days of tantalizing speculation about where it would fall, a core segment of a loose Chinese rocket hurtling toward Earth reentered the atmosphere Saturday night above the Maldives in the Indian Ocean. The rocket’s size and speed had made it nearly impossible to pinpoint what might happen as it fell. Luckily, “the vast majority of items were burned beyond recognition,” the official Xinhua News Agency said. The debris came from the largest section of the rocket, which launched the main module of China’s first permanent space station into orbit. Usually, discarded rocket stages reenter the atmosphere soon after liftoff, normally over water, and don’t go into orbit. NASA Administrator Sen. Bill Nelson issued a statement saying: “It is clear that China is failing to meet responsible standards regarding their space debris.”

Medina Spirit, winner of this year’s Kentucky Derby, tested positive for the anti-inflammatory drug betamethasone, a result that could ultimately lead to the horse’s disqualification.⁠ ⁠Trainer Bob Baffert disputed the positive test result, saying Medina Spirit “has never been treated with betamethasone.”⁠ ⁠”Yesterday I got the biggest gut punch in racing for something that I didn’t do,” Baffert said. ⁠Churchill Downs suspended Baffert from entering horses at the track, days after Medina Spirit made him the winningest trainer in the Kentucky Derby’s 147-year history. According to Kentucky Horse Racing Commission regulations, a second positive test — called a “split sample” — is required before a horse can be disqualified.⁠ Churchill Downs confirmed runner-up Mandaloun will be declared the Kentucky Derby winner if the findings of Medina Spirit’s positive test are upheld.

Sunday is Mother’s Day. For many Americans, that means sending flowers or buying gifts or simply spending time with mom. For some, it represents a day of remembrance for mothers that have passed. This year, some 14 months into the COVID-19 pandemic, some would rather this Mother’s Day not “exist at all.” For people who lost their mothers to COVID-19, it’s a reminder of a freshly gaping void. “Before this year, I always joked with my children and said Mother’s Day was the most important day of the year,” said Ashlyn Fox, whose mother and grandmother died of COVID-19 six days apart. “This year, I don’t want it to exist at all. I want to pretend it doesn’t exist.” More than 250,000 women have died of the virus in the U.S., per the CDC. Many of them were mothers.

The pace of vaccination in India has dropped as the country grapples with a surge in coronavirus cases and complaints of oxygen shortages at hospitals. The world’s second most populous country is setting a record pace of infections: Just over 403,000 confirmed cases were reported Sunday, including 4,092 deaths. So far, about 10% of India’s population have received one dose, while just shy of 2.5% have received both.

The European Union on Friday called on the United States to start boosting its vaccine exports to help contain the global crisis. The U.S. said earlier last week that it would support efforts to waive some intellectual property protections for COVID-19 vaccines to allow more countries to produce more of them, but officials said it would not have an immediate impact on global supplies, and drug makers have opposed lifting patent protections.

The operator of Colonial Pipeline, a major pipeline system that says it delivers roughly 45% of fuel consumed on the East Coast, was hit with a ransomware attack and halted all pipeline operations to deal with the threat, the company said Saturday. Colonial Pipeline said the ransomware attack Friday affected some of its information technology systems and that the company moved “proactively” to take certain systems offline. Experts say the attack is unlikely to affect gasoline supply and prices unless it leads to a prolonged shutdown of the pipeline, but the breach underscores the vulnerabilities of critical infrastructure to damaging cyberattacks that threaten to impede operations. The attack was carried out by a criminal gang known as DarkSide that cultivates a Robin Hood image of stealing from corporations and giving a cut to charity, the Associated Press reported.

We can’t help but cringe at moms like Lucille Bluth on “Arrested Development” or Regina George’s mom in “Mean Girls.” This Mother’s Day, we’re celebrating our favorite pop culture moms from TV shows and movies.

This is a compilation of stories from across the USA TODAY Network. Contributing: Associated Press.