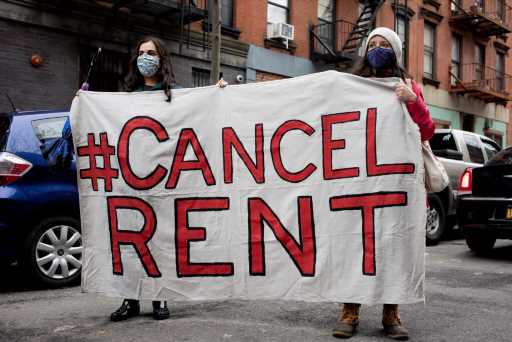 From the onset of the Covid-19 economic recession in the United States last spring, housing organizers and advocates warned about the possibility of a coming eviction crisis.

Job losses hit renters, who make up a disproportionate share of service sector jobs, especially hard. In fact, by the first week of April last year, nearly one-third hadn't paid their rent on time. Even a year later, almost 20% of renters are behind on their housing payments, according to a report from Mark Zandi, chief economist at Moody's Analytics, and Jim Parrott, a fellow at the Urban Institute.

But the U.S. never saw evictions on a mass scale, thanks to tireless work over the past year from housing organizers, activists and policy experts. In the midst of a global pandemic, these advocates stressed the importance of keeping people stably housed and fought for tenants' rights and relief.

As soon as Covid-induced economic shutdowns began, policy experts emphasized the need for a prolonged moratorium on evictions, billions in federal rental assistance and funds to aid people already experiencing homelessness. Organizers and activists took to the streets in cities across the country, physically blocking housing courts from hearing eviction cases and launching rent cancelation campaigns.

These victories are the culmination of decades of work by affordable housing advocates and activists, says Diane Yentel, president and CEO of the National Low Income Housing Coalition (NLIHC)

"It's been an extraordinarily difficult year," says Yentel. "There has been a tremendous amount of creativity and ingenuity that has kept tens of millions of people who otherwise would have lost their homes housed during the pandemic."

But that ban only applied to a limited number of renters living in federally financed properties. Some states and localities also imposed their own temporary bans, but the result was a patchwork of laws that didn't protect the country's most vulnerable renters.

And when the federal and many of the local bans expired at the tail-end of summer 2020, eviction filings began to rise, according to Princeton's Eviction Lab. While national eviction data is hard to collect, the Lab found that the number of new filings in 16 locations it tracks increased from 1,992 at the beginning of August to 3,131 by the end, when the moratoria were no longer in place.

Though Congress was slow to act to reinstitute the eviction ban, the Trump Administration took the historic step of imposing a nationwide moratorium via the Centers for Disease Control and Prevention (CDC). The first week after that order was in place, new eviction filings dropped by half, according to the Eviction Lab's data.

While its legality is currently being argued in court, it was recently extended by the Biden Administration through June 30, 2021.

Beyond the bans, a record number of states and localities — including Philadelphia, Nebraska and Connecticut — have passed or introduced tenant-friendly laws for the first time in decades, in some cases. On the federal level, Congress has allocated more than $87 billion in housing and homelessness assistance since the start of the pandemic.

Currently, tenants having difficulty paying their rent can apply for a piece of the $45 billion Congress has allocated for rental assistance by contacting local housing groups or calling 211 or 311. To qualify, at least one member of a household must meet certain eligibility requirements, outlined here.

And more tenants have learned for the first time over the past year that they have rights. Many are seeking out lawyers to help them with their cases, says Caitlin Cedfeldt, an attorney at Legal Aid of Nebraska's Housing Justice Project, who represents tenants in housing disputes.

"I'll have a client say, 'Hey didn't Biden sign something that said you can't evict someone?' Even if it's not precise, there's still an awareness that they might have a reason to be able to stay. And that's really good." Cedfeldt says.

More work to be done

But alongside the historic victories, there is still much work to be done, says John Pollack, coordinator of the National Coalition for a Civil Right to Counsel.

The various eviction moratoriums still left millions — especially people of color, who make up a disproportionate share of renters and those who lost jobs in the past year — vulnerable at one time or another over the course of the past year. Many tenants don't know that the moratoria have even been in place, Pollack says. Landlords are still evicting people.

The rental assistance outlined above is coming too late for many, says Pollack. Its arrival after more than a year of hardship means much of it will go to the billions in overdue rent and utility payments.

That's if renters can access it at all. Though Congress has allocated over $45 billion in rental assistance, there has been a lag in disbursing the aid to the people who need it most. "The rental relief is a godsend, but a lot of people are not seeing it," Pollack says.

Legal Aid's Cedfeldt says that though awareness of protections has grown, many tenants still may not be aware of the eviction moratorium or know that they can seek counsel to help them in a potential eviction case.

"It's great that we have rental assistance and have these protections in place, but I still think the information gap is a problem," she says. "People can get a lawyer through Legal Aid, they can get this assistance. They should seek counsel because that can make a difference."

Still, NLIHC's Yentel is hopeful. More rental assistance programs are opening regularly to help get aid to vulnerable tenants, and homeless shelters and service providers have worked tirelessly to move people experiencing homelessness to hotels and other temporary housing arrangements that have helped protect them during the pandemic, she says.

"Just as the pandemic did for so many social issues, it brought to light some truths," says Yentel. "And one of those truths is that our collective health — physical and mental health — depends on people being stably and affordably housed."

Check out: Meet the middle-aged millennial: Homeowner, debt-burdened and turning 40