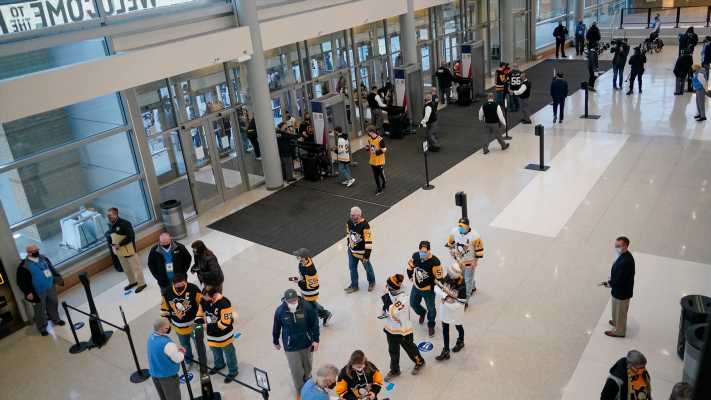 Fans are slowly being allowed back into NHL arenas in limited numbers as COVID-19 restrictions start to ease in states.

And teams and players are making sure to say what a difference having fans in the stands has meant for them.

The Pittsburgh Penguins, who welcomed back fans on Tuesday, tweeted out a photo Wednesday of mask-wearing, socially distanced fans at PPG Paints Arena during the 5-2 win against the Philadelphia Flyers.

"We just had to say this again… Thanks for the continued support, Penguins fans. We can't wait to see you tomorrow night," the tweet said.

The only issue, is that not all of the fans in the original Getty Images photo were wearing their masks properly and another didn't have oneon.

… three people in that picture have their masks photoshopped on https://t.co/WL961w1bwQpic.twitter.com/pzMGeGHLG7

BLACKHAWKS: Three-time Cup winner Brent Seabrook calls it a career because of injury

Taylor Haase of DK Pittsburgh Sports, who had been tweeting photos of improper mask use during the night among some of the 2,800 fans in the building, noticed and shared that the photo had been altered.

The team addressed the issue in a statement to the New York Post.

“Our social media team should never send out altered photos to our fan base,” the Penguins said. “This is a violation of our social media and safety policy, and this staffer has been disciplined.”