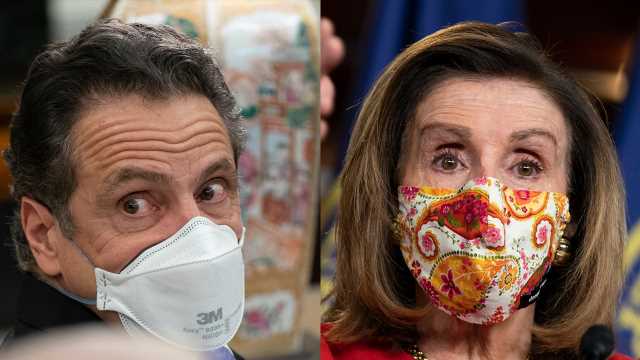 The speaker this week sent a letter to New York’s congressional Democrats, touting the federal proposal’s $50 billion in state and local funding for New York as well as $20 billion to “support families’ health, financial security and well-being.”

The proposed amount far exceeds the $15 billion the governor has repeatedly said the state needs to close New York’s budget gap, according to the Times Union of Albany, N.Y., which covers the state’s capital region. The newspaper said it obtained a copy of Pelosi’s letter.

“We sadly observe over 1.5 million coronavirus cases, nearly 45,000 deaths, and hundreds of thousands of job losses in New York,” Pelosi writes. “Please know that your concerns are being addressed in ways that you have advanced and with the enthusiastic advocacy of Leader Chuck Schumer and Sen. Kirsten Gillibrand.”

The Times Union called the letter a “rare rebuke” from Pelosi who is usually closely aligned with Cuomo.

The proposed aid, which would include more than $12 billion for schools, $8 billion for transit and $3 billion for Medicaid, would likely help avert possible budget cuts Cuomo had threatened, according to the New York Daily News.

New York House Democrats had sent a letter to Pelosi two days earlier asking for adequate funding and Cuomo sent a letter to state lawmakers last week demanding at least $15 billion in direct relief, according to the Times Union.

Cuomo reiterated the $15 billion figure this week when a legislative breakdown reportedly showed New York would receive only around $12.7 billion in direct funding to the state’s government.

Pelosi’s letter arrived Thursday, a day before Cuomo and other governors met with President Biden to discuss the Democrats’ $1.9 trillion aid package.

After the meeting, Cuomo, chair of the National Governors Association, in a joint letter with vice-chair Arkansas Gov. Asa Hutchinson, said, “The President and his team made clear that they recognize and appreciate how critical this targeted relief is for our ability to recover from this pandemic,” according to the Buffalo News.

Republicans have been critical of Democrats’ relief plan, which may pass along party lines. New York Republican Tom Reed claimed it prioritizes the “far left over bipartisan compromise,” according to the Time Union.

The governor’s office pointed the Times Union to the statement on the White House meeting after the newspaper’s requested comment over Pelosi’s letter.