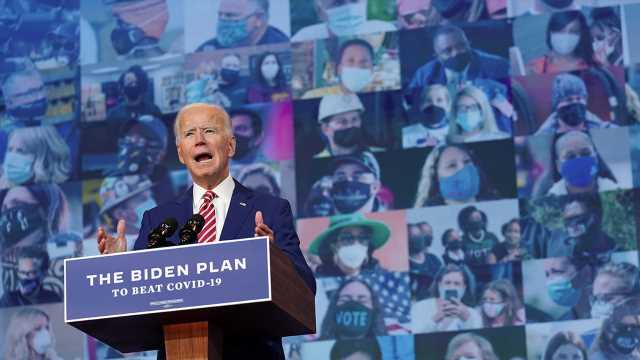 The vaccine rollout is a freakin’ mess, and President Biden owns it now.

I say that not because I think all the country’s problems can be laid at the doorstep of a guy who’s barely been president for a week. The Biden team contends that the Trump administration left far lower supplies than expected, and every new Oval Office occupant blames his predecessor for leaving him a disaster.

But it’s the press that is now openly challenging Biden to do a better job of getting these potentially life-saving shots into the arms of more Americans. And judging by Jen Psaki’s daily briefings, Biden is also being pressed on issues ranging from China to the Russian demonstrations to violence in Portland. Except for the stray questions about impeachment, the name Trump is coming up far less often.

It’s not Biden’s fault that many state programs are a confusing patchwork that can barely be accessed online because websites are overwhelmed by demand. He is taking steps to try to boost the production of the coronavirus vaccines and such key products as syringes–though the White House hasn’t been able to say just how many doses are in the stockpile.

But as the president continued to proclaim his goal of 100 million shots in his first 100 days, the media weren’t buying it. That was the question that prompted Biden to snap “give me a break” at an AP reporter who asked about it last week.

Now Biden has changed his tune.

“I think we may be able to get that to 1.5 million a day, rather than 1 million a day,” he told a Bloomberg reporter at a news conference. “But we have to meet that goal of a million a day.”

BIDEN NEEDS A QUICK WIN ON COVID, WITH OR WITHOUT REPUBLICANS

Everyone knows why Biden set the goal at 100 million. It’s because he thought he could easily reach or exceed it. In politics, you get hammered for failing to reach a benchmark that you had announced. But since the program devised by the Trump team was already at or nearly on pace to reach 100 million doses, the press blew the whistle on the fact this was hardly an ambitious goal. (Keep in mind the two-dose regimen would immunize only 50 million people.)

Asked at the presser when any American who wants a vaccine could get one, Biden said Monday that “I think we’ll be able to do that this spring,” even though that would be “a logistical challenge that exceeds anything we’ve ever tried in this country.” For the record, health experts such as Anthony Fauci are saying that won’t happen until at least the spring or fall, and Psaki walked it back yesterday.

Biden was wrapping up when he decided to recognize Fox’s Peter Doocy, saying “I know he always asks me tough questions and always have an edge to them, but I like him anyway.”

Doocy asked the president to justify saying “there is nothing we can do the change the trajectory of the pandemic in the next several months,” when two months ago he declared “I’m going to shut down the virus.”

Such questions are fueled by the growing frustration across the country as even those in the priority groups are unable to get vaccine appointments, or are having their appointments canceled.

But in a larger sense, it reflects the jarring transition from candidate to commander-in-chief.

Suddenly it’s Biden, not the guy down at Mar-a-Lago, who’s responsible for every issue around the globe. Will the START treaty be extended? Will troop levels overseas be increased? Will Harriet Tubman be on the $20 bill? (On that last one, Biden plans to speed up the process.)

No one would suggest that Biden and his top spokeswoman are being grilled by the press the way that Trump and his press secretaries were. That’s in part because Psaki adopts a conciliatory tone, in part because Biden isn’t under either impeachment or investigation, and in part because of a visceral dislike that so many journalists had for Trump.

But even with greater civility,

, which is its job, and he is being forced to adjust.