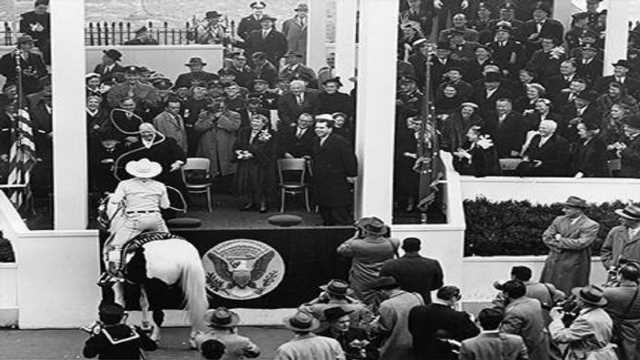 Not every presidential inauguration goes as expected.

Joe Biden is preparing to take the oath of office during an Inauguration Day Wednesday that will look different because of the coronavirus. But he won’t be the first leader to encounter a bit of the unusual on the opening day of his presidency.

Here are four of the more unusual presidential inaugurations throughout American history:

Washington, D.C., was ready for this one — until Mother Nature decided to have other plans.

The Republican president’s second inaugural ceremony was forced indoors and its parade was canceled when bone-chilling temperatures swept through the nation’s capital in early 1985. 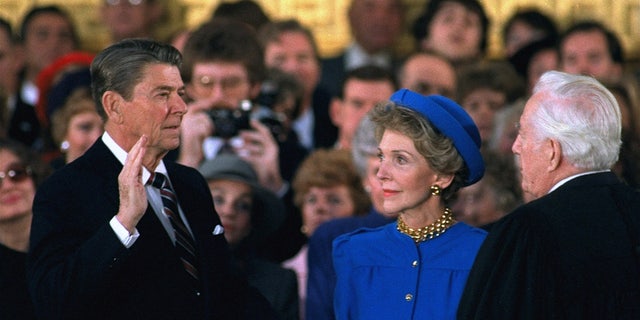 First lady Nancy Reagan looks on as President Ronald Reagan is sworn in during ceremonies in the Rotunda beneath the Capitol Dome in Washington on Jan. 21, 1985. Reagan, forced indoors by a record inaugural freeze, reenacted his oath-taking and sounded a second- term dedication to his conservative principles.
((AP Photo/Ron Edmonds))

Reagan ended up taking the oath of office inside the Capitol Rotunda in front of a few hundred people. Around 140,000 ticket holders had expected to watch it outdoors — but the National Weather Service says the temperature was 2 degrees below zero that morning, with gusty winds making it feel like 23 below.

Reagan said medical and military experts warned him that under the windy, freezing conditions forecasted, “exposed flesh can freeze within five to 10 minutes, triggering considerable danger to many of the parade and ceremony participants, spectators and the general public.”

Ron Walker, chairman of the 50th American Presidential Inaugural Committee, had told The Associated Press at the time that he wanted “to cry” after learning about the change in plans.

But the announcement brought relief to others.

“I’m sure the kids playing brass instruments would have had the skin ripped right off their lips,” parade costume designer Donna Bailey had said.

Presidential inaugurations are usually held at the U.S. Capitol during the middle of the day. 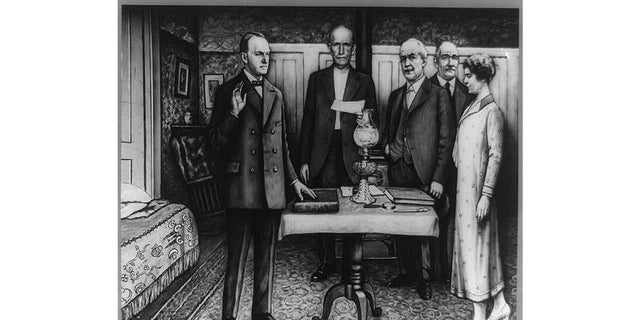 A composite photograph of Calvin Coolidge being sworn in as president at his family’s home in Vermont on Aug. 3, 1923. (Library of Congress)

Coolidge, then-vice president, was vacationing in Plymouth Notch when he received word that President Warren Harding had died.

“By the light of a kerosene lamp, his father, who was a notary public, administered the oath of office as Coolidge placed his hand on the family Bible,” the White House says.

Col. John Coolidge later said “nobody told me I couldn’t” when asked if he was allowed, as a notary, to swear in America’s next president.

Everyone appeared to enjoy this stunt — except for the Secret Service. 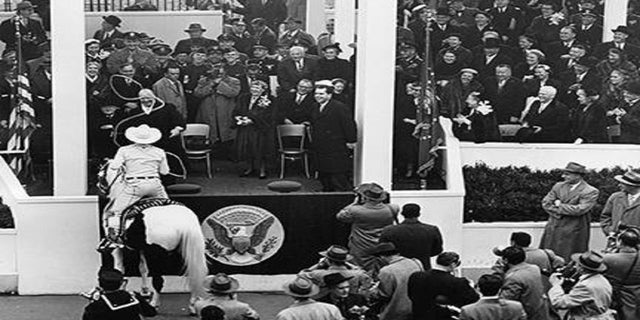 Montana – who had appeared in Western films with John Wayne — rode up on a horse to Eisenhower’s viewing stand and asked him for permission to toss the rope, according to an Associated Press report from the time.

“Eisenhower obligingly got to his feet, and the cowboy, on the second try, looped the lariat around his shoulders from a distance of about 15 feet,” it said. “The crowd loved it, and cut loose with a big round of cheers.”

But Montana later told the Los Angeles Times that the president’s protective detail didn’t find it as funny.

“I was lucky the Secret Service didn’t ventilate me,” he said.

America’s ninth president holds the record for the longest inaugural address, speaking for an hour and 40 minutes on March 4, 1841.

Even though the temperature reached 54 degrees that day, Harrison delivered his speech in the rain and without a coat. 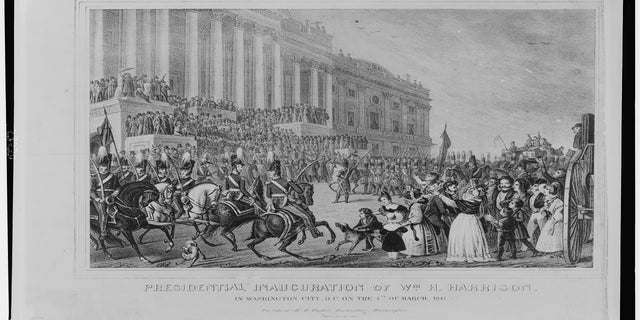 He kept the same wardrobe for the parade and then spent several hours outside the White House greeting people as temperatures cooled.

Harrison ended up catching a cold following the long day, and that later developed into pneumonia.

He died about a month later, spending just 31 days total in office.