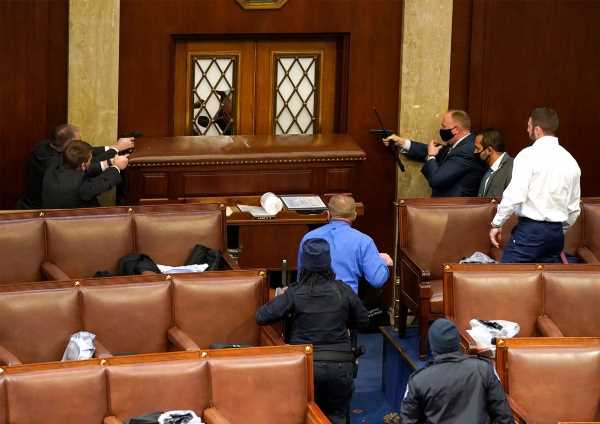 Pro-Trump protesters surged into the U.S. Capitol amid an extraordinary attempt by a group of House and Senate Republicans to object to the Electoral College results, disrupting a process that historically had been a quadrennial post-election formality.

Supporters of President Donald Trump and his baseless claims that he lost the November election because of fraud marched into the rotunda of the Capitol building as the House and Senate were debating the objections.

The House and Senate were temporarily recessed and Vice President Mike Pence, who was presiding over the joint session of Congress, was whisked away from the House floor. Security officials were preparing to evacuate lawmakers. Doors to the House and Senate chambers were locked.

The chaotic scene unfolded as the House and Senate were debating an objection to Arizona’s electoral vote count by a group of Trump allies in an attempt to overturn the results of the presidential election, an effort that is destined to fail.

The objection, the first of three expected to come from lawmakers in both chambers, are certain to be rejected by Democrats along with a number of GOP lawmakers. But the action hardened the bitter partisanship in Congress and exposed deep rifts in the Republican Party under Trump.

Senate Majority Leader Mitch McConnell decried the attempts by some of his GOP colleagues to cast doubt on the validity of the election won by Democrat Joe Biden, warning it would put democracy in the U.S. into a “death spiral.”

“The voters, the courts and the states have all spoken,” McConnell said on the Senate floor. “They’ve all spoken. If we overrule them, it would damage our Republic forever.”

Objections to Electoral College counts have been raised before, but never have such efforts gained as much partisan momentum or been embraced by the occupant of the Oval Office. Trump has refused to concede the election, making baseless claims of voter fraud.

McConnell, who has been cautious in dealing with Trump over the past four years, said the president’s arguments have included “sweeping conspiracy theories” and that while he has supported Trump’s right to court challenges they were rejected by courts including those overseen by “all-star judges” who Trump nominated.

Vice President Mike Pence, who is presiding over the joint session, also defied the president, saying in a letter to Congress that he has no power to intervene.

“It is my considered judgment that my oath to support and defend the Constitution constrains me from claiming unilateral authority to determine which electoral votes should be counted and which should not,” Pence said in the letter.

Senate Democratic leader Chuck Schumer, speaking in the Senate after McConnell, said the outcome of the proceedings was clear and that the effort by Republicans to reverse the election was an embarrassment to them, their part and the country.

He said they risk damaging “our great and grand democracy.” The peaceful transfer of power in the U.S., he said, is extolled by second-graders “but not by some here.”

Congress is ultimately expected to certify the outcome that gave Biden 306 electoral votes, followed by his inauguration on Jan. 20.

Trump has encouraged the objections and the protests, calling McConnell and others the “Surrender Caucus” and repeating baseless claims that the election was rigged.

He has also egged on his supporters at a protest in Washington just before Congress convened. In front of more than a thousand people gathered at a park south of the White House Wednesday Trump said he wouldn’t concede his loss in the election, which he claims without evidence was tainted by vote fraud.

“We will never give up, we will never concede,” he told the crowd. “We won this election. We won it in a landslide.”

Later, he urged his supporters to stay peaceful and respect the police. But he also excoriated Pence for not trying to block the electoral count.

Mike Pence didn’t have the courage to do what should have been done to protect our Country and our Constitution, giving States a chance to certify a corrected set of facts, not the fraudulent or inaccurate ones which they were asked to previously certify. USA demands the truth!

This claim of election fraud is disputed, and this Tweet can’t be replied to, Retweeted, or liked due to a risk of violence8:24 PM · Jan 6, 2021


The objections brought GOP lawmakers in open and heated conflict with each other over the attempt to block Biden’s election.

Arizona GOP Representative Paul Gosar joined by other House Republicans and at least one Senator began the process, formally objected to the Arizona electoral count.

“I rise both for myself and 60 of my colleagues to object to the counting of electoral ballots from Arizona,” Gosar said.

With that, Senators trailed out of the House chamber and over to the Senate side to debate the objection.

The counting of the Electoral College votes of the 50 states and Washington D.C. is typically a quadrennial formality for Congress. But the objection to Arizona along with challenges to Georgia and Pennsylvania will drag out the process, with each getting up to two hours of debate and separate votes in the House and Senate.

The lawmakers objecting on Wednesday are poised to form the core of opposition to Biden in the new Congress, where they will likely urge GOP leaders to refuse any deals with a president they consider illegitimate. The effects could be felt in the GOP Senate when it comes to passing new virus-relief legislation or raising the debt ceiling later in the year.

The effort to overturn the November result began in December, when Representative Mo Brooks, a Republican from Alabama, said he would challenge the results of the Electoral College in five states: Arizona, Georgia, Nevada, Pennsylvania and Wisconsin. This week, he said he will object to the results from Michigan as well. All six states were won by Biden.

Other House Republicans joined the effort, and Brooks has said that he expects more than 50 members of his chamber to object to results from one or all those states.

Under the U.S. legal code, members of either the House or the Senate can object to the official declaration of the Electoral College results during a joint session of Congress that convenes on Jan. 6 at 1 p.m. No objection can proceed unless both a representative and a senator sign onto it and submit it in writing to the presiding officer — Pence in this case.

Josh Hawley, a Republican of Missouri, was the first senator to indicate that he would join the effort to challenge the results. Since then, several other senators, including Ted Cruz of Texas and GOP Republicans elected to the chamber for the first time in November, have indicated they would support the effort unless there is an investigation of the voting process.

The day began with a ceremonial feel, as mahogany boxes containing the electoral ballots are carried into the House chamber. Four lawmakers designated as “tellers” — two from each party and from each chamber — will take turns calling the names of the states in alphabetical order from Alabama through Wyoming.

The process of counting the votes continues until all state results are tallied. The entire process took about 45 minutes in 2017, when then-Vice President Biden presided over the count.

There have been symbolic challenges in the past. In 2005 Ohio Representative Stephanie Tubbs Jones and California Senator Barbara Boxer, both Democrats, objected to Ohio’s results awarding its electoral votes to Republican George W. Bush. The challenge was rejected by votes of 267-31 by the House and 74-1 by the Senate.

Democrats in both chambers are planning to counter the Republican effort by focusing on the constitutional issues and encouraging the members from the challenged states to speak during the debate portion of the proceedings.

— With assistance by Mark Niquette