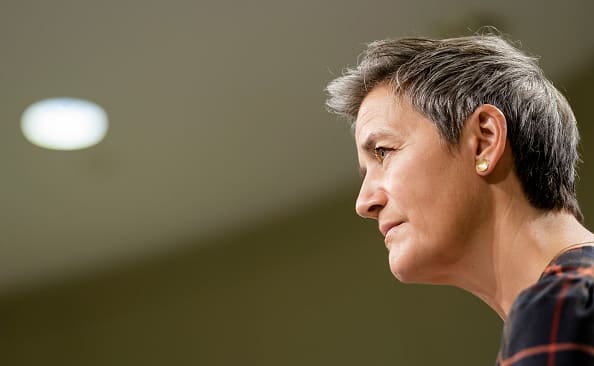 LONDON — Europe is again attempting to position itself as a leader in tech regulation, with a major overhaul of digital rules that some experts say could become a global standard for keeping Big Tech in check.

The EU on Tuesday unveiled its landmark Digital Services and Markets Acts. The measures require tech giants to take more responsibility over illegal content and goods distributed on their platforms, and aim to prevent them from giving preference to their own services over those of rivals.

The package of laws is the biggest shakeup in EU digital policy in decades, and is part of a wider fightback against the dominance of large U.S. tech companies like Google, Amazon, Facebook and Apple.

Failure to comply with the Digital Markets Act (DMA) — which targets the business models of digital platforms — could result in fines as high as 10% of the companies' annual global revenues, similar in scale to fines recently announced by the U.K. as part of new online safety rules.

Companies that repeatedly break the rules could even be forced to divest parts of their business. Global regulators have increasingly been pushing for powers to break up Big Tech.

Raegan Macdonald, head of policy at internet non-profit Mozilla, said that the EU's General Data Protection Regulation (GDPR) privacy reforms introduced in 2018 have already become the blueprint for similar initiatives around the world; California, for example, borrows some elements from that piece of legislation.

"The EU is poised to be a leader in this space," Macdonald told CNBC. "They've done it for the GDPR, for other issues like net neutrality, and they could do it again."

"I would see this more as a start, and many other countries will surely do their own thing or maybe do something similar."

A history of targeting Big Tech

The European Commission has for years tried to take on U.S. internet giants over what it sees as the reduction of competition in Europe.

So far, the EU executive body has fined Google a rough total of $10 billion for antitrust violations related to its shopping, mobile and advertising services. This year, the Commission also launched two competition probes into Apple and charged Amazon with breaching antitrust rules by using independent sellers' data for its own benefit.

The bloc's latest move aims to block what the EU calls digital "gatekeepers" from using their market power to lessen competition, essentially expanding on its efforts to rein in Big Tech over the last few years.

The Digital Markets Act "will recalibrate what digital platforms can and can't do in Europe," said Bernd Meyring, a European competition lawyer at Linklaters.

"Leaving aside eye-catching powers for the Commission to break up digital giants in the case of systematic non-compliance, the wide-ranging obligations covering interoperability of digital services, access to platform data and a prohibition on preferencing their own related services will have significant effects on digital platforms' business models."

It's worth noting that the latest EU measures come as the U.S. ramps up its antitrust scrutiny into Big Tech, with the Department of Justice suing Google and the Federal Trade Commission suing Facebook over alleged competition law violations. Meanwhile, the U.K. is preparing sweeping reforms of its own for tech giants.

A work in progress

However, not everyone is happy with Europe's digital reforms — especially not the tech companies it's most likely to affect. Google, for example, has lobbied hard against the rules and says it's concerned the EU is targeting "a handful of companies."

And while some critics say the EU may be going too far with its approach, others worry it doesn't go far enough.

"The EU has generally fallen short of the mark when it comes to enforcing its own rulings," Sophie Dembinski, head of public policy at Ecosia, told CNBC. The alternative search engine is calling on Brussels to revisit a landmark antitrust case against Google regarding its Android smartphone system.

"While the DMA is certainly a regulation that we can support, what will be most impactful in the immediate term is a concerted effort on the part of the EU to enforce the decisions already in place."

And it's going to take some time before the EU's digital reforms actually take effect. The new rules need to be approved by member states and the European Parliament before being adopted. European competition chief Margrethe Vestager has said they could be fully active in two years' time.