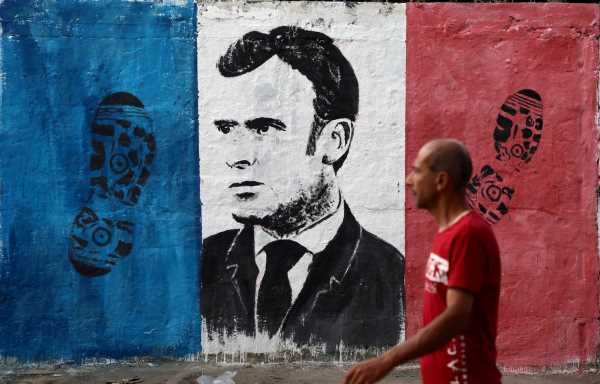 Nagib Azergui used to be hopeful that the racism he experienced growing up in a Paris suburb was on its way out. In Emmanuel Macron, the country was getting a president who would heal divisions, an “anti-Trump leader.”

The head of France’s only Muslim political party now he says he was wrong. Macron has called Islam a religion in crisis and has moved to shut down mosques accused of spreading hatred. Last week, his government introduced a draft law to fight “separatism,” a term he’s coined for groups that don’t integrate and are susceptible to extremism.

“Muslims are tired of being used by politicians as scapegoats to deflect attention away from real problems,” said Azergui, 41, an engineer of Moroccan descent from Nanterre.

Azergui can’t claim to represent the country’s Muslims—his group still only has about 1,000 members and in last year’s European elections it gained just 0.13% of the vote. But Macron’s policies have reinvigorated his goal of fighting Islamophobia and encouraging citizens of his religion to stop being “invisible.”

France’s president has cultivated an image abroad as a defender of liberalism since coming to power in 2017 in contrast to leaderships in the U.S., Britain and eastern Europe. Yet at home he’s been courting conservatives after a series of horrific attacks by Islamic radicals and that risks alienating a Muslim population that may be heterogeneous but also represents France’s second biggest religious group after Catholicism.

As campaigning for the 2022 presidential election unofficially gets underway, there’s a growing sense of betrayal within France’s 5.6 million-strong Muslim community, the overwhelming majority of whom are integrated and reject terrorism.

Macron hasn’t said whether he’ll run again, but he’s clearly positioning himself as the law-and-order candidate in an election that’s likely to pit him against far-right leader Marine le Pen.

Attacks by extremists have left about 250 people dead since 2015, including a teacher beheaded in October for opening a classroom debate on freedom of speech and cartoons of Prophet Muhammed.

Part of the French president’s plan entails creating an “Islam of Enlightenment” and while he has repeatedly insisted that Muslims shouldn’t be stigmatized, his assertion that the religion is in crisis upset many Muslims in France.

As did his appointment of Gerald Darmanin, a hardliner, as interior minister in a recent cabinet shuffle. His prime minister, Jean Castex, meanwhile has dismissed the idea of making amends for France’s colonization of regions including in North Africa and the Sahel, from where many of its Muslims can trace their roots.

France’s Muslim community is broad and opinions are hard to pin down because of restrictions on collecting ethnic and religious statistics.

The country’s aspiration for universalism and integration makes it harder for those who identify with any religion from entering public life, said Hakim El Karoui, a fellow at Paris-based think tank Institut Montaigne. Polls commissioned by Journal du Dimanche, a French weekly newspaper, and Charlie Hebdo,  the satirical magazine targeted in a 2015 terrorist attack, last year showed that 60% of French deem Islam incompatible with the values of the Republic, with almost half of French Muslims under 25 sharing that view.

“Society puts Muslims in a double bind,” said El Karoui. “Speak up, but also, don’t show your religion in public.”

El Karoui is himself a poster child of success in France, and said Islam represents a link to his family’s roots. His mother is Protestant, his father a Muslim of Tunisian origin. He’s an ex-banker whose time at Rothschild coincided with Macron’s. Two of his uncles were ministers in Tunisia before the uprising that sparked the Arab Spring. El Karoui served as an adviser to former Prime Minister Jean-Pierre Raffarin.

In his elegant office in Paris’s business district, El Karoui thinks France’s integration system ultimately works well, citing as an example a high rate of mixed marriages. He advocates the creation of a body that would raise funds to encourage Muslims to fund research and train imams.

“After every terrorist attack, discrimination against Muslims jumps,” he said. “What I’m telling them is: It’s not your fault, but now it’s in your interest to get organized.”

The trouble is that when they try to do that, they can run into problems. Fatima Bent is the president of the feminist, anti-racist group Lallab. It describes itself as “pro-choice” on issues from abortion to the veil, but has been accused of being close to the Muslim Brotherhood. When it was set up in 2016, a bank even rejected its application to open an account.

Bent said she worries most about police violence, which quietly affected Muslims in the suburbs, or “banlieues,” for a long time before entering the public eye more recently. She’s critical of a law provision once pushed by Macron that would have made it harder to share videos of police abuse.

Muslim voters are disappointed by the parties on the political left, which they have tended to support, Bent said. That’s when they don’t abstain.

While Azergui tries to get people behind his Union of French Muslim Democrats, which he founded eight years ago after former President Nicolas Sarkozy began a debate on national identity and immigration, Bent is betting on local initiatives. She’s organizing to help Muslim women share their stories.

“I can’t believe we’re still asked whether Islam is compatible with secularism when we have millions of French Muslims at peace with these two identities, and living peacefully,” Bent said. “The government’s rhetoric is dangerous, it’s widening the rift of ‘them’ against us.”

According to the draft law on “separatism” published on Dec. 9, there will be stricter punishments for those who promote hatred online and threaten civil servants, including teachers. It neither explicitly mentioned Islam nor Muslims.

Doctors who provide “virginity certificates” will also be targeted and scrutiny of the funding of religious associations increased. Home-schooling for kids older than three, meanwhile, will be restricted in a bid to prevent clandestine religious schools. Macron also wants to end the ghettoization of city suburbs and support their residents, though he has yet to unveil firm proposals to do so.

Azergui is concerned the crackdown will backfire and drive more youngsters to extremism. He defends an interpretation of France’s secularism, known as “laicite,” whereby all faiths are respected but kept private, though he’d like women to be allowed to wear veils wherever they want.

Since 2004, the wearing of religious signs has been prohibited in French schools, a ban backed by 44% of Muslims, according to a recent Ifop poll. While the veil may be worn elsewhere, women who do so and take on public responsibilities are often criticized as promoting a sexist symbol, including by government members.

“When Macron speaks about separatism, he deliberately focuses on Islamism rather than on Corsican separatists, or wealthy people building a life on the margins,” said Azergui. “We’re an easy target.”