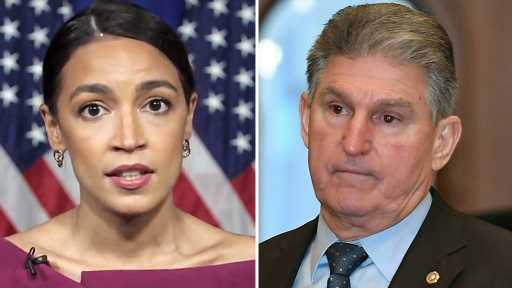 Sen. Joe Manchin warned on Tuesday that members of the progressive "Squad" will have some explaining to do the American people if they try to thwart efforts to pass bipartisan coronavirus legislation.

"They’ll have to answer to the public," Manchin, D-W.Va., told Fox News if the Squad stonewalls compromise legislation. "We’ve come in a bipartisan, bicameral way to agree on $908 billion. Some will say it’s too much. Some will say it's not enough. I don't know how you please everybody but we found something that met the needs we think America has.”

Manchin, a moderate, and squad member Rep. Alexandria Ocasio-Cortez, a "Democratic socialist" from New York, have recently traded jabs over the direction of the Democratic Party.

Manchin told the New York Times that Ocasio-Cortez was "not that active with her bills or in committee. She’s more active on Twitter than anything else.”

His comments came after the Bronx, N.Y., Democrat posted a photo of herself glaring at him. She was responding to Manchin knocking the "defund the police" movement.

On Tuesday, Manchin called out "extremes" on both sides and said he's a West Virginia moderate Democrat who is "comfortable in the middle."

"I don’t know the young lady. I really don’t. Maybe she’s a fine – I just don’t know her," Manchin told Fox News. "I understand we have different political positions. And that’s fine."

Manchin said Ocasio-Cortez is very keen on social media and hoped she recognizes his compromise legislation would help her constituents.

"She’s very astute in the social arena," Manchin said. "But we just got to get something done. And I hope they recognize that. We’re helping everybody in her area, in every district, in every state."

In the aftermath of the 2020 election where several moderate Democrats lost their House seats, Ocasio-Cortez and fellow squad members have taken the blame for championing policies like Medicare-for-All, a Green New Deal and defunding the police.

“It hurt the brand for sure," Manchin said.

The senator said the amplified voices of a small minority of people made it tough for the rest of the Democrats who had to fight the stigma of socialism.

Opponents made it "look like if you have a 'D' by your name you’re for socialism," he said.

"We can't even pay for Medicare for some," Manchin said. "Don’t you think we should fix the system we have now?"

As for the Green New Deal, Manchin said what's important is that America is energy independent. "We want a clean environment but we also want a balance between the environment and economy. We think that can be done. You can't do it if you’re so rigid."

A spokesperson for Ocasio-Cortez, Lauren Hitt, didn't offer a new response on Manchin's remarks. But she defended Ocasio-Cortez's legislative record to the New York Times, pointing out the congresswoman has missed fewer votes than Manchin and authored more amendments than 90 percent of other freshmen.

“The congresswoman has earned a reputation as a tough, prepared member in committee hearings,” Hitt told the newspaper.

AOC RIPS MSNBC'S CLAIRE MCCASKILL: 'WHY DO WE LISTEN TO PEOPLE WHO LOST ELECTIONS?'

Ocasio-Cortez has previously hit back on the accusation that the squad was the reason for Democrats losing House seats. She said moderates who are blaming progressives for their struggling campaigns had "awful execution" of digital campaigning during a pandemic and called out the need for year-round organizing.  She said swing seat Democrats who co-sponsored the Green New Deal and Medicare for All won re-election.

"So the whole 'progressivism is bad' argument just doesn't have any compelling evidence that I've seen," she tweeted after the election.

As for coronavirus relief, Ocasio-Cortez has been advocating for a big package that includes mortgage and rent relief, expanded health care, stopping student loan payments and $2,000 in monthly reoccurring payments to all families and $1,000 per child — regardless of immigration status. She's urged the squad to play "hardball" to get bigger relief packages.

In meantime, she's been raising private funds to help constituents in her district. Most recently she raised $240,000 in donations to support six eviction defense and food relief programs in New York. The bulk of the money was raised during a five-hour Twitch live stream playing the online game Among Us.

Though they represent opposite ends of the party, Manchin said he's open to talking to Ocasio-Cortez and getting to know her.

"I'd be happy to. I talk to everybody," Manchin said. "I don't have any problems — I just never had the opportunity to sit down and speak to her."