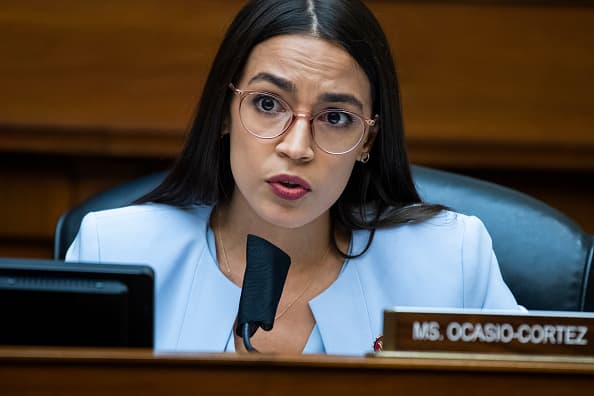 In 2016, Alexandria Ocasio-Cortez was not yet a history-making member of Congress. She was a 27-year-old, living in the Bronx in New York, waiting tables and slinging drinks to help support her mom. At the time, Ocasio-Cortez felt lost professionally.

So AOC signed up for former Google business development executive Megan Hellerer's one-day, $50 career development workshop, WTF Am I Doing With My Life?

"The first time I offered [the workshop] live in New York, she came," Hellerer (whose workshop and coaching prices have since increased) tells CNBC Make It. "And then from that, we worked privately together."

At the time Ocasio-Cortez attended the workshop, she wasn't thinking about running for Congress, according to Hellerer, she was just looking for direction. And Hellerer helped her find that.

"In my method, the first thing we do is figure out [that] purpose is directional, not destinational," Hellerer says. She has her clients take "warmer" steps to bring them closer to a goal, while avoiding "colder" steps, which take them further from it.

Ocasio-Cortez was interested in becoming a political activist (she had graduated Boston University in 2011 with a degree in International Relations and Economics and had interned for Sen. Ted Kennedy's immigration office). So AOC's "warmer" steps included volunteering for Bernie Sanders' 2016 campaign to become the Democratic presidential nominee, as well as trips to both Flint, Michigan in the wake of the city's contaminated-water crisis and to Standing Rock Indian Reservation in the Dakotas to protest construction of the Dakota Access Pipeline.

Though AOC and Hellerer only worked together for a few months, the experience was "pivotal" for Ocasio-Cortez, she said in a testimonial that Hellerer posted on Instagram in 2019.

Hellerer "helped me reframe a lot of my thinking and was part of a series of events that culminated in this big adventure of a Congressional run…and win!" Ocasio-Cortez said of her successful 2018 congressional race for New York's 14th District seat. "As a result of this work, I opened a door I didn't even know existed."

While Hellerer can't discuss the details of Ocasio-Cortez's sessions, she says takes all of her clients through the same phased methodology. Here's a look at her program.

Hellerer says the first phase of her program is to identify the beliefs that are holding back her clients from pursuing their goals.

For example, Hellerer says people often have untrue beliefs like "it's normal to be unhappy in your work," or "it's selfish to want to be fulfilled by your work," she says.

"We basically do a big inventory of what is keeping us stuck so that we can begin to unlearn it, which is how we clear the space or pave the way for re-learning the new way of doing things," Hellerer says.

Hellerer urges her clients to find their "true" or accurate self, which she refers to as an "inner GPS."

"[T]his is about restoring yourself to accuracy," she says. When people do things that fall in line with their accurate self, it feels "light and right," she says.

However, there is a part of everyone that wants to stay safe and comfortable, the "saboteur" or the "fear self," Hellerer calls it. The saboteur says things like, "I'm too old, I'm too young" or "I won't make enough money," and typically has a "temper tantrum" when a client tries to do something different, she says. Hellerer works with her clients to push through their "saboteurs" and explore the unknown.

To set clients on their path, Hellerer says she mines their feelings of jealousy for information about what it is they really want and where they want to go.

Then they can navigate taking "warmer" steps (as AOC did with her activism).

Hellerer helps clients let go of the beliefs and actions that are not working for them in order to make space for who they are becoming.

For instance, during this phase, Hellerer has her clients do a "calendar purge," where they comb through each event on their calendar and evaluate whether they should continue with the activity (because they truly enjoy it) or event or let it go (because they do not).

Once a client finds their direction, it's time to take massive action, says Hellerer. She calls this phase, "making s— real."

Hellerer typically asks clients to make a transformation checklist of actionable steps. During this stage, clients to pick something new that they want to activate or work towards.

Hellerer says it's important that clients continue to go through these phases regularly throughout their careers and lives.

A representative for Ocasio-Cortez did not immediately respond to CNBC Make It's request for comment.

Don't miss:
Highest-ever Amex Gold Card welcome bonus is worth up to $600 in gift cards
I used a peak performance coach who worked with Google and Berkshire Hathaway—and it helped me
Mental coach shares the 4 mindsets that help you succeed (and the ones that hold you back)