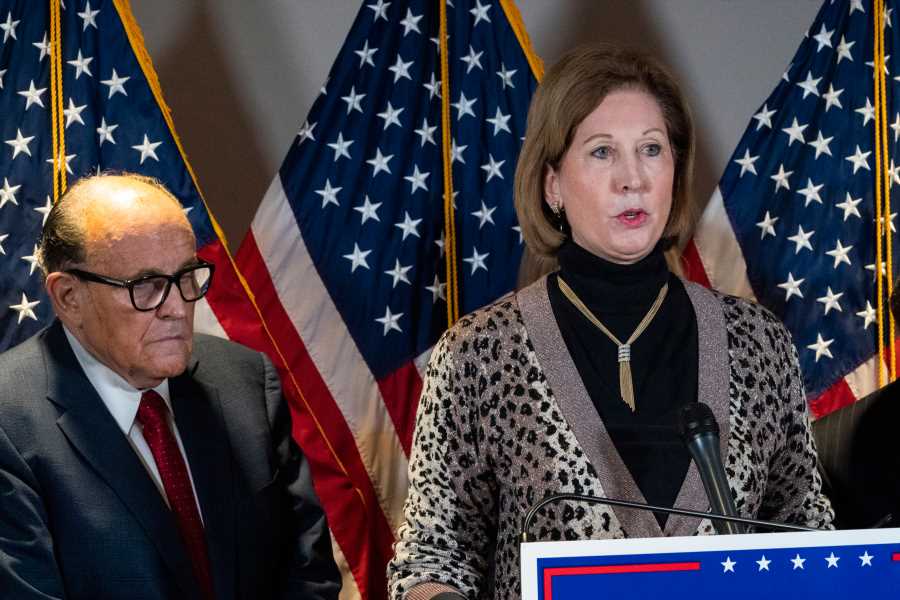 President Trump’s lawsuit-heavy coup to overturn the election results hit a little snag over the weekend.

Sidney Powell, the very serious attorney who refers to herself as “The Kraken” while promising “biblical” revelations of nonexistent election fraud, went so far off the deep end that even Donald Trump had to disavow her. After a week spent promoting increasingly outlandish conspiracy theories — including that Georgia’s Republican Governor Brian Kemp was bribed to rig the election for Joe Biden — the Trump campaign on Sunday released a statement claiming Powell is “practicing law on her own” and “not a member of the Trump Legal Team.”

This is pretty hard to square considering the degree to which Trump, the Republican Party, and the rest of the the president’s legal dream team have rallied behind Powell as a representative of their interests.

Here’s Trump tweeting about her:

Here’s the GOP posting a clip of her appearance during a bizarre press conference held by Trump’s legal team last week. “President Trump won by a landslide,” Powell said before claiming the team was prepared to “reclaim the United States of America for the people who vote for freedom.”

It was Ellis and Giuliani who signed the statement released Sunday attempting to distance the team from Powell.

So what happened? Spend five minutes perusing Powell’s social media and it isn’t hard to pick up on why she might be a liability. Her Twitter is nearly indistinguishable from a QAnon account. Powell has posted conspiracy theories, grandiose mythological imagery, and vague promises to release incontrovertible proof that Trump actually won the election by millions of votes. As of Monday morning, she’s tweeted over 105,000 times, which is … a lot. This is what she does.

Powell’s latest claim, and possibly the one that led Trump’s team to sever ties, is that Brian Kemp, Georgia’s Trump-loving Republican governor, helped rig the state’s election in favor of Biden is exchange for a monetary payoff from communist-aligned foreign interests. “Georgia is probably going to be the first state I’m going to blow up, and Mr. Kemp and the Secretary of State need to go with it,” she said on Newsmax before describing her forthcoming legal filing as “biblical.”

The Washington Post reported on Sunday that Trump told allies that Powell was “too much” and that he no longer found her “helpful” to his anti-democratic coup to overturn the election results. This may be true, but it’s also true that the president has been gleefully promoting many of the same conspiracy theories as Powell. Going “too far” seems to be the entire point of whatever it is Trump’s team has been trying to accomplish since Biden won the election. As some have pointed out, the real reason for the statement might simply be that Powell crossed a line by going after a Republican as powerful as Kemp.

Regardless of why Trump’s legal team is suddenly trying to distance itself from Powell, it’s hard to argue with Trump’s reported claim that she wasn’t helpful. As Democratic lawyer Marc Elias pointed out on Sunday, Trump and the Republican Party are currently 2-34 in post-election court cases.