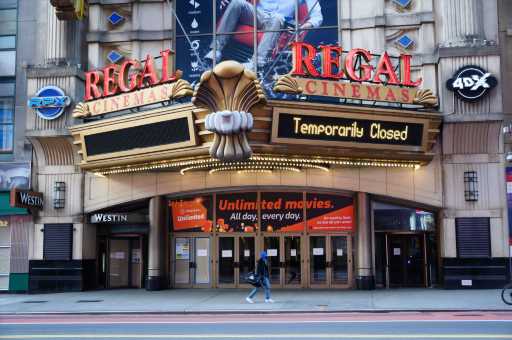 Eight months ago movie theaters were forced to close due to the coronavirus pandemic. Now that the number of cases is rising once again, theaters in New York, a major cinema hub, could remain closed for even longer, and some may never reopen at all.

New data provided to CNBC by Comscore on Thursday illustrates how important the area is to the film industry.

There are nearly 300 cinemas in New York state, but the key geographic metric that analysts are focused on is New York's designated market area, or DMA. This is an area surrounding New York City that includes part of Connecticut and New Jersey and excludes cinemas north of Albany and west of Cooperstown. Within this DMA are 234 cinemas that represent 7.4% of the total domestic box office, according to Comscore.

That is the second-highest driver of ticket sales in the U.S., just behind the Los Angeles DMA, which accounts for 8.9%.

"The state of New York is an important market for the exhibition industry, not only in the United States but also around the world," the National Association of Theatre Owners wrote in a letter to Gov. Andrew Cuomo earlier this month, ahead of his decision to allow cinemas outside New York City to open with limited capacity.

Perhaps what is most important is that this region includes the 45 locations in New York City, which represent nearly 40% of the DMS' total ticket sales, according to the Comscore data. Currently, only one theater is open in New York City, a drive-in location that is exempt from coronavirus restrictions on indoor theaters.

That drive-in accounted for 6% of New York's ticket sales over the most recent weekend, Comscore data showed, and it will likely close soon as the weather turns colder.

Average daily Covid-19 cases in the U.S. set another all-time high on Wednesday, marking the fourth consecutive day the nation topped its prior day record. The seven-day average of daily new U.S. cases was 74,183, a 24% rise from a week ago, according to a CNBC analysis of data from Johns Hopkins University.

"As the pandemic continues, movie theaters are quite literally at the mercy of state and local protocols that in many cases prohibit them from opening at all, let alone with reduced capacity," said Paul Dergarabedian, senior media analyst at Comscore.

While the whole state of New York accounts for only 6% of total ticket sales domestically, it is a massive marketing hub for films. Movies that perform well in the city generate buzz that helps sell tickets in other parts of the country.

"The temporarily sidelined 5 boroughs … are a powerhouse when it comes to the generation of box office revenue, boasting a large number of enthusiastic movie fans who are always on the lookout for new and notable movies in theaters," Dergarabedian said.

This is why studios told cinema owners earlier this month that they would not release major blockbusters if New York cinemas were not allowed to reopen.

"With New York's theaters shuttered for nearly seven months and no indication of when they will be allowed to reopen, the studios that supply new movies have been reluctant to release their latest films to the point where almost no new major films will be released globally until 2021 and beyond," NATO wrote earlier this month.

"Without new movies to play in our cinemas, many members of the global exhibition community will be forced to close their doors again," NATO said. "Many of these companies will not survive."