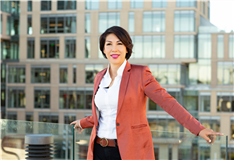 Idaho native and politician Paulette Jordan is hoping to bring a lot of change to her home state this November.

As the Democratic nominee for Idaho's Senate seat up for election this year, Jordan, is hoping to defeat long-term Republican incumbent, Sen. Jim Risch, who is running for a third six-year term. If Jordan wins, she will be Idaho's first female senator and the first Native American woman in U.S. Senate history. Jordan's victory will also mark the first time in more than 40 years that Idaho has had a Democratic senator.

A member of the Coeur D'Alene Tribe, Jordan, 40, grew up on a reservation in Idaho where she learned about leadership and protecting her community's land and resources at a young age. Both of her grandparents, she tells CNBC Make It, were chiefs, and they led negotiations on government affairs and executive orders for members of her tribe. Some of these negotiations, she says, included "protecting our sovereign rights to access natural resources" and protecting her tribe's land bases.

"Really, it's all about tribal sovereignty, independence and protecting our way of life," she explains. "I was raised up with the mindset of being very driven to be economically sovereign and having this sovereign voice when it comes to protecting our land and having our natural resources be stewards of the environment."

After graduating from the University of Washington in 2003, Jordan followed in her family's footsteps and was elected to the Coeur d'Alene Tribal Council in 2008, making her the youngest person to hold that role. In 2014, she set out to serve the broader Idahoan community when she ran to represent the 5th district in the Idaho House of Representatives. Unseating incumbent Republican Rep. Cindy Agidius, Jordan won the seat and successfully ran for a second two-year term in 2016.

In 2018, Jordan continued her political journey by becoming the Democratic nominee for governor of Idaho, making her the first woman nominated to the position by a major party in the state and the first Native American woman nominated for governor in U.S. history. Though Jordan lost the election to Republican nominee Brad Little, she earned nearly 40% of the votes in that election.

Jordan, who currently serves as senior executive board representative and finance chair and energy initiative chair for the National Indian Gaming Association, is now setting out to serve her state in a new way by taking over the Senate seat. If elected, she plans to focus on a number of key issues, starting with health care.

"Health care is going to be the number one issue when it comes to facing this pandemic," she says. "And this is a challenge for those who contract Covid-19 and can barely afford health care."

Jordan explains that when you look at the most economically depressed communities in this country, Native Americans are often near the top of the list and they're being disproportionately impacted by Covid-19. In June, the Navajo Nation had the highest infection rate in the country, greater than that of New York at the time, according to the Center for American Progress. In New Mexico, where Native people make up only about one-tenth of the population, the Center for American Progress reported that they accounted for more than 55% of coronavirus cases. This disproportionate impact is linked to the "limited health services, broken infrastructure and above-average rates of immunocompromising diseases" that Native people face, reports the Center for American Progress.

To address this health-care crisis, Jordan says she will work to expand affordable health care to all Idaho citizens and she will work to guarantee health care coverage to citizens with pre-existing health conditions. During her first year in the Idaho House of Representatives, she explains that she promoted expanding Medicaid throughout the state. Though that attempt was unsuccessful, the young politician worked to gain more support during her second term, helping to take the issue to a ballot initiative in 2018 where more than 61% of Idaho voters voted in favor of the expansion.

In addition to health care, Jordan says today's economic crisis is another key issue she will focus on as senator for Idaho. "I want to see our economy turn in favor of working class families and make sure that we are defending economically suppressed communities that no one is looking out for," she says. "We have so many people facing evictions and in the homeless line to get into homeless shelters and we have so many food insecure families. It's unfortunate, but this is the reality and there is an opportunity to turn this economic crisis that we face around to benefit everyone."

Though the state's unemployment rates have improved from 11% earlier this year when stay-at-home orders were in place to 4.2% as of early October, Jordan says there is still a lot more work that needs to be done in response to the current health and economic crisis.

As of early October, Idaho had one of the worst positive Covid-19 test rates in the country considering its population size, having reached 500 deaths, reports to the Associated Press. In July, a report released by the nonprofit organization United Way of Treasure Valley also found that 40% of Idahoans are not financially stable. The report referred to these individuals who are financially unstable as "ALICE," which stands for asset limited, income constrained, employed. Many of these people, according to Nora Carpenter, president of United Way of Treasure Valley, are grocery store clerks, truck drivers and daycare providers who were struggling to keep up with the state's rising costs of living even before the pandemic.

Beyond the health and economic crisis of today, Jordan says she will continue to fight to protect the sovereignty of tribal communities "and their right to make their own decisions." That's why, she says, "I believe in local control and local governance because really it's the people at the local level who know best for the decisions they should make on behalf of their own communities, their neighbors and their friends."

"There is opportunity for [tribes] to be sovereign in all ways possible," she adds. "But, when you don't have leadership that is educated on what sovereignty means or what that relationship really looks like and what it is intended to be, then you're going to be at a loss where tribes are constantly fighting for recognition of that sovereignty."

If elected in November, the mom of two says she understands the impact that her historical win will have as she reflects back on the history of Native American people in this country.

"Many people ask, 'Well, why in the 21st century have we never seen a Native American woman like yourself in the Senate,'" she says. "And I remind them that we not only went through this mass genocide that the country still hides, but a lot of our education, you know from the relationship between the first peoples of this land to what is now the United States, is not taught in our history books. It's not taught in the public education system."

"So we're like the last to really come to the table to be able to have a voice," she says. "And now that we are starting to build into this practice of voting and participating in the national electoral process, we're also recognizing that we can not only now vote, but we can also run and become a voice."

Check out: Chase Sapphire Preferred is offering a massive 80,000-point bonus for a limited time