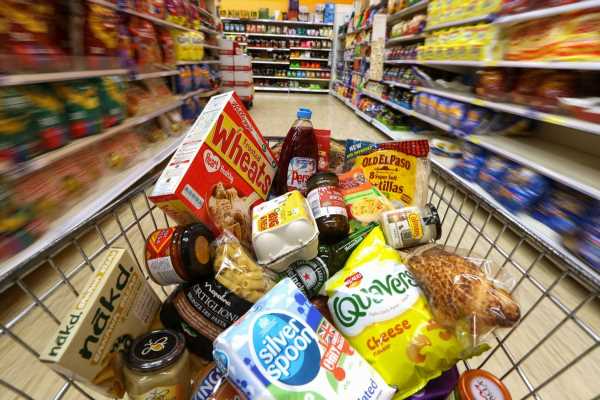 Supermarket prices in Britain could start increasing in coming months as food supplies get pummeled by a triple whammy of Brexit, Covid-19 and weather-struck harvests.

The U.K. is just 10 weeks from leaving the European Union’s single market, yet there’s still no trade deal between the two sides. If the status quo persists, import taxes averaging 18% will be slapped on meat, produce and beverages coming from the bloc starting Jan. 1. Both sides are aiming for zero tariffs, but there’s a chance they won’t succeed. Either way, logistical burdens will stack up as new checkpoint bureaucracies are created.

Portions of those extra costs likely will make their way to consumers, putting some foods out of reach and exacerbating existing inequalities. The looming sticker shock dovetails with grocers trying to ward off stockpiling in the face of more Covid-19 lockdowns and domestic wheat output dropping near a four-decade low after a year of weather extremes.

“We’re all very nervous,” said Simon Lane, owner of Fruco Plc, which imports about 100 truckloads of fruit and vegetables from the EU every month. “It’s a watch-this-space situation. One thing is for sure: no-deal will equal a bad deal for consumers.”

The U.K. relies on foreign fare for about half the meals consumed domestically, and the deadline for a Brexit trade deal approaches during winter, when little is harvested from local fields. Talks between the two sides resumed Thursday, and Irish Prime Minister Micheal Martin said “momentum” is building toward a deal.

The uncertainty leaves importers scouring tariff codes to calculate the potential hits to their business. Spanish-foods retailer Brindisa needs to decide whether to stockpile as much as 500,000 pounds ($645,000) of shelf-stable items, such as olives and tinned fish, to avoid disruptions for its customers. It also may start transporting goods by sea for the first time.

“The U.K. can’t feed itself,” said Heath Blackford, managing director for Brindisa’s wholesale division. “If we don’t get a deal, we should all be expecting to pay more for our food.”

Supply chains snarled by the down-to-the wire negotiations risk sparking food inflation at a time when job cuts are climbing by a record amount. With shops already operating on low margins, higher tariffs likely would ripple into higher consumer prices, said the Food and Drink Federation, with members ranging from cereal makers to soft-drink companies.

A season of floods and drought also hurt growers. The paltry wheat crop means imports may double from the prior season as domestic values climb. Porridge maker Pimhill Farm raised prices about 6%, the first increase in seven years, after a May dry spell hampered oats output, and the Shropshire-based company is unsure how Brexit will affect costs for the imported nuts and raisins used in its longstanding muesli recipe, manager Ian Anderson said.

“It’s the unknown that’s the worry,” he said.

Shoppers in Britain spend a relatively low proportion of their income on food, and prices have been subdued in recent months. Still, the number of people in need has climbed as the coronavirus upends the economy. The Trussell Trust, which supports 1,200 food banks nationally, expects food-parcel demand to increase 61% in the fourth quarter from a year earlier.

Nearly a third of children –- about 2.2 million – between the ages of 8 and 17 are enrolled in free school-meal programs this autumn, with 42% of them newly registered, as household income wanes, according to data from The Food Foundation charity.

“We are terrified about the predictions there are around the number of people who are going to be struggling,” said Lindsay Boswell, chief executive officer of FareShare, a charity that reroutes surpluses from restaurants and retailers to U.K. charities and community groups. “Demand for food is going to soar at a time when the supply chain is going to be massively disrupted because of Brexit.”

Even with a trade agreement, knock-on effects from logistical hangups or a declining currency could make it pricier to stock pantries. Extra paperwork, and animal and plant health certificates, required at the borders could lengthen transport times, and the chairman of Tesco Plc, Britain’s top supermarket chain, warned of fresh-food shortages if no deal is reached.

Lane, owner of Crowborough-based Fruco, said trucks of nectarines and peaches can’t afford to get held up at the border because their shelf life fades quickly. The U.K. previously said it would grant a six-month grace period for customs checks, but since the EU hasn’t agreed to the same, trucks still could get snarled on that side of the border. Leaving the single market means food-price inflation “under any eventuality,” said Dylan Bradley, an agribusiness director for London-based IHS Markit.

While some have praised the food system’s resilience during the pandemic — with stores quickly restocking after shortages when lockdowns began — that was all during the U.K.’s time in the one market, said Tony Heron, professor of international political economy at the University of York. Removing that buffer just as Europe goes through another surge of infections will prove a tougher test.

“It’s a very visible, tangible effect if prices start to shift or if certain produce becomes unavailable,” he said.

Yet Harry Smit, a senior analyst at Rabobank in the Netherlands, said it’s unlikely the U.K. will levy tariffs on food imports because it’s so reliant on foreign fare, and tandem taxes imposed by the EU –- making British exports uncompetitive there – would create domestic surpluses of lamb, barley and other farm products.

Plus, increasing commodity prices for food manufacturers don’t always lead to higher costs for consumers, said Sarah Baker, senior strategic insight manager at the Agriculture & Horticulture Development Board. For example, wheat only accounts for about a 10th of the cost of a loaf of bread.

“If consumers are increasingly price conscious, you can see that everyone in the supply chain needs to take a bit of a knock,” she said.

The current upheaval from politics, coronavirus and the climate is prompting some growers to make long-term preparations. Julian Gold invested in new grains storage at the farm he manages in South Oxfordshire so he could diversify his plantings and keep them ready for market over longer periods.

The 750-hectare (1,853-acre) estate stopped raising sheep for the first time in his 28-year tenure in case a no-deal cuts off vital sales to the EU, and he plans to rent a small field to a fruit or vegetable grower as the pandemic fuels a buy-local boom.

“We’re in a more volatile world,” he said.

— With assistance by Agnieszka de Sousa