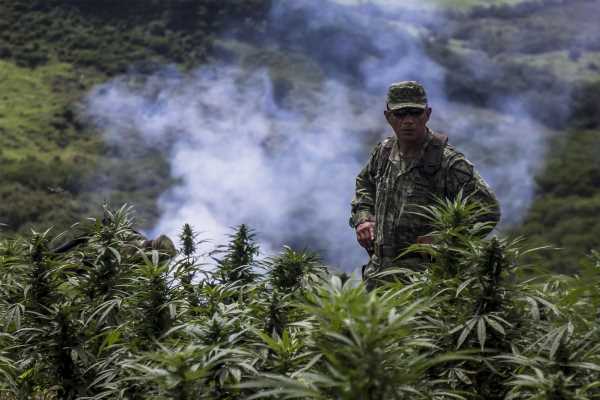 From the outside, General Salvador Cienfuegos, with his stern visage, ramrod salute and beribboned chest, presented the image of a front-line warrior against drug traffickers.

But Cienfuegos, who was arrested by U.S. officials as he landed at Los Angeles International Airport late Thursday, was, according to their indictment, wielding the vast power of his office and military not to interrupt drug traffic but to help a cartel known as H-2.

Prosecutors cite thousands of intercepted Blackberry messages to paint a picture of Cienfuegos, nicknamed “Padrino” or “Godfather,” as an all-powerful benefactor who made sure thousands of kilograms of methamphetamine, cocaine, heroin and marijuana made their way into U.S. cities, producing millions of dollars in illicit cash.

“The defendant prioritized his personal greed over his sworn duties as a public servant, and he assured the continued success and safety of one of Mexico’s most violent drug-trafficking organizations,” the prosecutors wrote in a letter accompanying his indictment.

He not only smashed rival gangs, prosecutors say. He stopped military operations against H-2, introduced the cartel to “other corrupt Mexican government officials,” arranged ships to move their supplies and helped them capture more territory. He warned H-2 when the U.S. was using witnesses to testify against them, leading to the murder of a cartel member, the documents say.

The cartel “committed countless acts of horrific violence, including torture and murder, in order to protect against challenges from rival drug-trafficking organizations, fight for territory and silence those who would cooperate with law enforcement,” the letter says.

The indictment dates from August 2019. Cienfuegos, 72, hadn’t set foot in the U.S. until now, when officials could nab him. It’s unclear why he saw no risk in visiting. Prosecutors are asking that he be held without bail and tried in New York City where, if convicted, he could face decades in prison.

He made a brief appearance by video conference before a judge in Los Angeles Friday, speaking through a Spanish interpreter. Cienfuegos agreed to be held in a federal jail until a detention hearing Tuesday. His lawyer, Duane Lyons, said he will ask that his client be released on bail at that time. Lyons didn’t respond to a request for comment after the hearing.

His arrest comes 10 months after the U.S. charged Mexico’s top police official with protecting a different drug gang in the 2000s. The pair of indictments speaks to a mind-boggling level of corruption and intermingling of Mexican crime and law enforcement.

The military has a central domestic role which has grown dramatically since then-President Felipe Calderon began using it to escalate the war against the cartels in the late 2000s.

Cienfuegos was a driving force behind that expansion, testifying to lawmakers that only the military could be trusted to fight organized crime. In 2017, he successfully pushed President Enrique Pena Nieto to codify the military’s role in the drug war into Mexican law.

Since President Andres Manuel Lopez Obrador took office in 2018, the military has moved far beyond combat operations. Soldiers now do everything from protecting oil facilities and ports to undertaking public works including airports and even government bank branches.

Its reputation as one of the country’s more efficient and less corrupt institutions has been central to its expansion. Where local police forces have long been seen as working hand-in-hand with the narcos, the military can rotate troops and commanders around different regions to stop those relationships from forming — and it has at least scored high-profile captures of major figures.

Its culture and framework may have left it open to abuse by a bad actor at the top.

“No one is going to question the secretary on what he does or doesn’t do,’’ said Craig Deare, a former assistant U.S. defense attache in Mexico City and author of a book on U.S.-Mexico military relations. “That’s a pretty strong characteristic of the Mexican army: Whatever the boss says, you do that.”

It’s clear from the indictment that Cienfuegos had collaborators at official levels, some witting and some perhaps unwitting.

“Whatever he did, he didn’t do alone,” said Athanasios Hristoulas, security expert and professor at ITAM, Mexico’s Autonomous Institute of Technology, a private university. “There’s undoubtedly a whole bunch of other people in the army that are at least somehow co-conspirators in this.”

There were signs that Cienfuegos, while in office, might have, as U.S. prosecutors wrote, “no respect for public authority or the rule of law.”

Human rights groups railed against disappearances and extra-judicial killings allegedly committed by the military under his tenure, most notoriously in the unsolved kidnapping and murder of 43 students. “There was just an egregious failure” to hold people accountable under his reign, said Vanda Felbab-Brown, an organized-crime expert at the Brookings Institution.

The prosecutors in New York say Cienfuegos wielded his considerable power to help not only the H-2 cartel, but other unnamed gangs. Witnesses testified to the cartel’s “regular employment of violence to further its drug trafficking, its use of bribery to ensure government protection, as well as the assistance of the defendant to the H-2 Cartel and other drug trafficking organizations,” they wrote.
Cienfuegos was allegedly involved with H-2 when the organization was headed by Juan Patron Sanchez, who died in a 2017 shootout with the Mexican military. H-2 Cartel is a successor to the Beltran Leyva Organization, which was once led by Hector Beltran Leyva and operated in the Mexican states Nayarit and Sinaloa.

Cienfuegos’s arrest has raised the question of how deep the alleged corruption goes in Mexico’s armed forces.

When Lopez Obrador appointed current Defense Secretary Luis Cresencio Sandoval in 2018, he thanked Cienfuegos for his “collaboration” in the decision-making. Cienfuegos soon lavished praise on Sandoval. At a press conference on Friday, Lopez Obrador said he had rejected all of Cienfuegos’s suggested candidates and that Sandoval was comprehensively vetted.

The president promised to remove anyone shown to be involved in the case, but gave little sign that he plans to rein in the armed forces’ power. The military and navy “are pillars of the Mexican state,” he said. “They are so strong that not even such lamentable matters as the involvement of a secretary of defense in narco-trafficking will weaken them.”

— With assistance by Patricia Hurtado