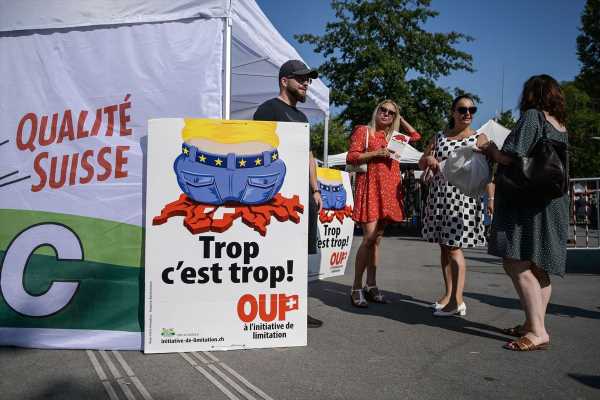 The Swiss are set to vote against a “worse than Brexit” immigration curb but are split over spending as much as 6 billion francs ($6.5 billion) on new fighter jets.

The immigration measure, which would have put Switzerland on a collision course with Brussels by limiting the number of newcomers from European Union countries, failed, with 63% voting against it, according to a projection published by public broadcaster SRF.

The vote on the fighter-jet purchase was too close to call, according to the projections. Polls in the lead-up had predicted the jets would get the go-ahead. The Swiss are also set to approve granting new fathers 14 days of paid leave.

Swiss to Vote on Spending $6.5 Billion on New Fighter Jets

The government and business groups campaigned against the proposed immigration curbs, saying they’d have forced Switzerland to renege on an economically vital agreement with the EU that touched on issues ranging from immigration to transport and public procurement.

Justice Minister Karin Keller-Sutter told newspaper SonntagsZeitung in August that a cancellation would be “worse than Brexit.”

Yet the anti-immigration Swiss People’s Party has for years tried to crack down on the influx of newcomers, saying they depress locals’ wages and cause a housing shortage. Roughly a quarter of the country’s 8.5 million inhabitants aren’t citizens.

The government is keen to modernize the air force, with its current fleet reaching the end of service in 2030. It argues, it’s necessary to keep the country safe, including for when heads of state attend the World Economic Forum in Davos.

Critics argued fighter jets aren’t necessary for a small country in the heart of Europe, and that they won’t do much good in the face of threats like cyber-attacks or natural catastrophes.