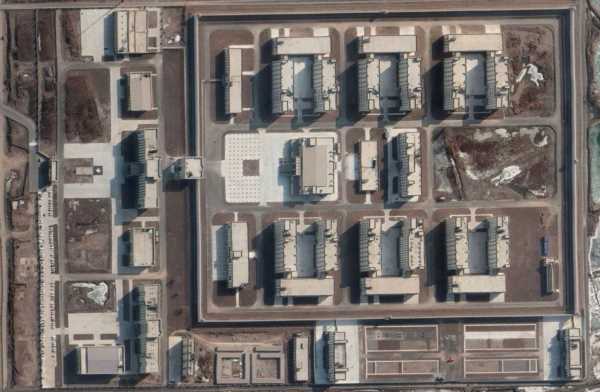 China is continuing to invest in detention camps in Xinjiang, according to a new research report, findings that could bolster calls to punish Beijing over its human rights practices in the predominately Muslim region.

At least 61 suspected detention facilities showed signs of new construction between July 2019 and July 2020, the Australian Strategic Policy Institute said in a report released Thursday. Some 14 such centers were still under construction this year after Xinjiang authorities said that all detainees had “graduated,” said ASPI, an Australia- and U.S.-backed research institute that has been tracking the camp network for more than two years.

About half of the recently expanded camps had greater security features, suggesting a shift toward more prison-style facilities from lower-security “re-education centers,” the report found. One 100,000-square-meter (1 million-square-foot) camp that opened in January in Kashgar, near the Kyrgyzstan border, is comprised of 13 five-story residential buildings surrounded by a 14-meter (45-foot) high wall.

China is continuing to expand detention camps in the predominately Muslim region of Xinjiang, according to a new @ASPI_org report.
China says the camps are vocational education facilities and that all detainees had “graduated.” More @business: https://trib.al/SUciZoV

62 people are Tweeting about this

In all, ASPI identified 380 suspected detention facilities built since 2017 in the region, which is roughly the size of Alaska and home to an estimated 10 million Turkic-speaking Uighurs. Around 70 camps appear to have been “desecuritized” by removing internal fencing or perimeter walls, the report said, including eight camps that show signs of decommissioning.

“It forces Beijing to confront its propaganda: at first they said there were no camps and that every report of a camp was a lie, then it shifted to saying these camps are necessary and that they were the only way to stop terrorism,” said Nathan Ruser, a lead researcher on the project. “They’re now saying the detentions are over. We can show the enduring construction and growth of this detention regime.”

The findings could fuel calls in the U.S. and Europe for more measures to punish Chinese authorities responsible for Xinjiang and companies that do business there. The Trump administration has already sanctioned 48 Chinese companies and Xinjiang Communist Party chief Chen Quanguo over their ties to a security state that has detained between tens of thousands and “upwards of 1 million” Uighurs, according a UN assessment.

Current and former suppliers to major international clothing brands including Ralph Lauren, Tommy Hilfiger and Nike have been hit by sanctions, while Walt Disney Co. has faced boycott calls for filming part of its live-action “Mulan” film in Xinjiang. French President Emmanuel Macron on Tuesday called on the United Nations to lead a mission to China to inspect human rights practices in the region.

China has defended the camps as “vocational education centers” intended to “purge ideological diseases,” including terrorism and religious extremism. They’ve disputed outside population estimates of the camps, without providing figures of their own. The facilities were built after a spate of deadly attacks involving Uighurs in 2013 and 2014, prompting President Xi Jinping to order authorities to “strike first” against Islamist extremism.

Chinese state media and diplomats have also frequently attacked the credibility of ASPI, with Foreign Ministry spokesman Zhao Lijian last month calling it a “deeply ideological organization that is essentially an anti-China ‘vanguard.’” ASPI was established by the Australian government in 2001 and has disclosed additional funding from global defense contractors and Western diplomatic missions.

The latest report was partially funded by a research grant from the U.S. State Department, ASPI said, adding the institute’s funding sources were transparent. “Our independence is clearly enshrined in our charter and the high quality of our research speaks for itself,” the group said.

ASPI has been tracking the development of Xinjiang’s camp system since mid-2018, using satellite imagery, government documents, media reports and witness accounts to map an expanding database of facilities across the region. About 30 sites were added to list last month after a Buzzfeed News investigation used blanked-out tiles on Baidu Maps to pinpoint additional locations on uncensored photos available outside China.

The latest ASPI report included satellite imagery and 3D models of four different categories of camps, designated according to security levels. While the group said it was unable to estimate total number kept in the facilities, they said the new facility in Kashgar appeared large enough to accommodate about 10,000 people.

“I hope that what it contributes is the sense of the scale of this program and also the enduring and permanent nature of a lot of these facilities and the extra judicial program,” said Ruser, referring to the ASPI report.