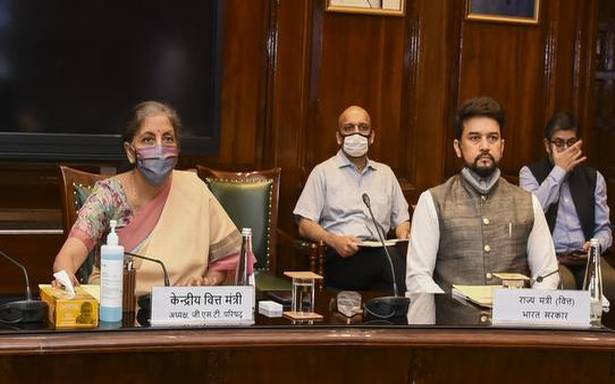 Nirmala Sitharaman said the economy is facing an extraordinary ‘Act of God’ situation, which may result in economic contraction.

The Centre on Thursday placed before the GST Council two options for borrowing by states to meet the shortfall in GST revenues, pegged at ₹2.35 lakh crore in the current fiscal.

Briefing reporters after the 41st meeting of the GST Council, Finance Minister Nirmala Sitharaman said the economy is facing an extraordinary ‘Act of God’ situation, which may result in economic contraction.

As per the Centre’s calculation, the compensation requirement by the states in the current fiscal would be ₹3 lakh crore, of which ₹65,000 crore is expected to be met from the cess levied in the GST regime. Hence, the total shortfall is estimated at ₹2.35 lakh crore.

Revenue Secretary Ajay Bhushan Pandey said of this, ₹97,000 crore is on account of GST shortfall, while the rest is due to the impact of COVID-19 on the economy.

Mr. Pandey said a special window can be provided to the States, in consultation with the RBI, at a reasonable interest rate for borrowing of ₹97,000 crore. The amount can be repaid after five years (of GST implementation) ending 2022 from cess collection.

The second option before the States is to borrow the entire ₹2.35 lakh crore shortfall under the special window.

“States have been given seven days’ time to think over the proposal,” Mr. Pandey said.