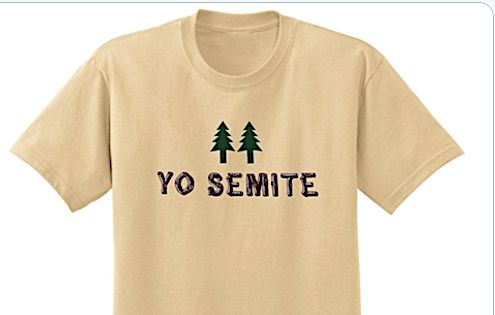 Trump struggled Tuesday in a speech as he mistakenly referred — twice — to Yosemite (yoh-SEM-i-tee) National Park as “YO-semite.” (Twitter wags referred to it as “Yo! Semites!” — which could be a weird Trump greeting to Jews.)

As it happens, the National Museum of American Jewish History in Philadelphia has been selling T-shirts with images of two sequoia redwood trees over the words “Yo Semite” since 2011. Trump’s gaffe sent sales skyrocketing.

Online shoppers spent $30,000 on the shirts and other merchandise in the first 30 hours after the blooper. That’s nearly the entire amount the museum collected in sales for all of June.

“It just keeps gathering momentum,” said Kristen Kreider, the museum’s director of retail and visitor experience, to the Philadelphia Business Journal. “I just keep thinking, ‘OK, this is going to be over in the next couple of hours. It’ll die down.’ And it doesn’t. It just keeps on going, and we’ll take it.”

The fast-thinking Kreider reached out on social media to hype the shirts after Trump’s remarks, and it worked.

The museum usually sells about 100 of the shirts annually, but some 1,500 flew off the shelf in just three days, Kreider told the Business Journal.

The windfall comes at an auspicious time for the museum, which shut down months ago. It filed for Chapter 11 bankruptcy protection in early March as it struggled to pay creditors.

Shoppers drawn by the T-shirts are also purchasing other merchandise from the museum’s online store and donating funds as well, Kreider said.

“It’s just a win-win for the museum, any way you look at it,” she added.