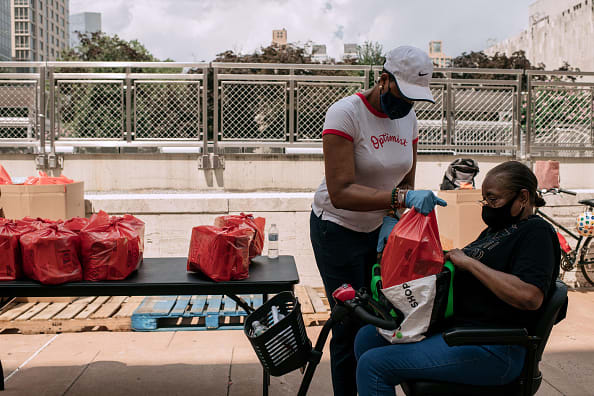 By the end of August, over 5 million Americans will be unable to cover their basic expenses for a full month without the extra $600 in enhanced unemployment insurance payments that lapsed last week, according to Morning Consult.

Some 30 million Americans are currently collecting jobless benefits, and they can continue to do so through the end of the year. But the extra $600 a week from the federal government that was provided under the CARES Act expired last week. Without that money, 44% of those currently collecting UI benefits will now receive less than $800 per month, per Morning Consult, which analyzed economic trends from three separate surveys conducted in May, June and July of this year.

"The personal finances of workers who have been laid off or placed on temporary leave since the onset of the pandemic deteriorated in July," writes John Leer, Morning Consult's chief economist.

In fact, 5.4 million Americans will be financially insolvent by the end of August, and over 9 million will be by the end of September without additional UI benefits or income from work, Morning Consult found. "These numbers are on top of the millions of Americans already unable to pay their expenses," notes Leer.

Those figures also doesn't take into account the Americans who will lose their jobs in the coming weeks and months, as businesses shut down in parts of the country where cases are surging and weekly jobless claims continue to increase, and who won't receive the extra $600 at all if Congress does not extend the benefit.

"It is also important to emphasize that layoffs have not stopped," writes Leer. "As the virus spreads and employers shrink their workforces, more Americans will become unemployed."

Morning Consult also found that the extra $600 in enhanced unemployment insurance did not deter people from returning to work, as many have argued as a reason against extending the provision.

Of individuals who had lost a job earlier in the pandemic but returned to work in July, almost 70% were making the same or more from their UI payments, Morning Consult found. Those who made more income from jobless benefits did not enter the job market at a lower rate.

This finding is in line with recent research from Yale University, which also found the extra UI benefit is not the primary reason people are not working, rather, it's the lack of jobs available.

Lawmakers are currently debating whether to include enhanced unemployment benefits in its next coronavirus stimulus package. Democrats largely want to extend the extra $600 per week until January 2021, while Republicans proposed replacing it with an additional $200 per week through September, followed by 70% wage replacement. It is likely they will strike a deal somewhere in the middle.