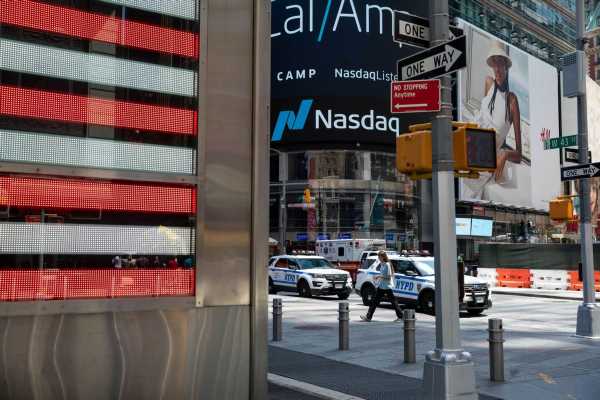 Gold is rallying, a time-honored sign of gloom. But speculative companies in the stock market are also surging, signaling faith in an economic turnaround. Then there’s the dollar, which just had its worst month in a decade.

Specifically, real rates — jargon for yields after accounting for inflation. They’re a concept long familiar in emerging markets, where prices have always bounced around more, often feeding through to their currencies. America is seeing something of the same thing: because increasing consumer costs are expected to outstrip the return on bonds, it’s the dollar that’s depreciating. And it’s doing so against everything from precious metals to the Australian dollar while arguably boosting swaths of the U.S. stock market.

One reason real rates have become a focus is that, by one measure at least, they’ve hit a record low, at about -1%. In simple terms, it shows the damage to an investor’s purchasing power from holding 10-year government bonds. Yields in turn have been held down by the Federal Reserve’s pledge to avoid raising policy rates for some time to come.

“Historically real rates never really caught much of people’s attention,” but that changed when they climbed in late 2018 and contributed to a sharp stocks selloff, said Nathan Thooft, Manulife Investment Management’s head of global asset allocation in Boston. Now, “the perception is that really low rates is a really good tailwind for equities. Exactly the same for precious metals. All these trades are interrelated.”

It helps explain why stocks have held up despite the worst American economic contraction on record. The S&P 500 Index is barely changed for the year. That makes more sense when you consider that lower borrowing costs make rising equity valuations easier to justify. Hence the expansion in technology price-earnings ratios, which at 35 in the Nasdaq 100 are higher than any time since the internet bubble.

Conversely, lower yields can depress lending margins, and the S&P 500 Financial Index on Friday capped its worst week in five. That was after Fed Chair Jerome Powell on Wednesday underscored that the U.S. central bank is “not even thinking about thinking about raising rates.”

Powell also said the Fed will present results from its strategic review in the “near future,” bolstering economists’ expectations for stronger guidance about the path of interest rates to be unveiled in September. The assumption is a prolonged horizon for near-zero overnight rates.

That presumption can already be seen in 10-year Treasury yields, which have averaged 0.66% the past four months and were at 0.53% Friday. Discount that with the 10-year inflation expectation embedded in Treasury inflation-protected securities, and the real yield is about -1.03%.

Some market players aren’t so sure about that, and use strident language about the Fed — and the government, with its record budget deficits — “debasing” the dollar. Goldman Sachs Group Inc. commodity strategists reiterated their call to buy gold, which they termed “the currency of last resort,” in a July 28 note to clients.

Charles Gave, who dates his market experience back to 1973, wrote two days later that “Treasuries are as overvalued as they were in 1973, 1978 or 2007.” Colleagues of his at Gavekal Research pointed to a basket of inflation expectations taken from surveys and market data, spanning the short to long term, having rebounded to 1.9%, not far from the Fed’s 2% target. Gave predicted gold will keep outperforming, the dollar will decline and U.S. stocks will underperform other regions.

Persistent negative real rates haven’t happened for long periods in the U.S., Evercore ISI strategists highlighted during the week. Their take was that the environment will prove good for value stocks, which had a relatively poorer record during the epic bull run in equities that ended with Covid-19.

Real rates aren’t the only dynamic in play. John Zaller, chief investment officer at Mai Capital Management, detects a whiff of speculation in gold and silver. Gold has soared about 25% over four months, reaching a record high around $1,975 an ounce Friday. Silver has surged 74%, to highs unseen since 2013.

And some of the dollar’s decline — the Bloomberg Dollar Spot Index has slumped more than 9% from its high in March — has come thanks to a euro boosted by a historic European Union joint economic-stimulus package.

The greenback hasn’t been helped by a surge in American coronavirus cases over the past several weeks that left the U.S. comparing unfavorably with other developed nations. The specter of renewed shutdowns has cast a shadow over what had been an improvement in a job market throttled by Covid-19. Economists warn the pace of recovery in payrolls is set to slow markedly in July; the data are due Aug. 7.

Yet the S&P 500 was able to grunt out a 1.7% advance the past week, despite data showing a mammoth 32.9% annualized contraction in gross domestic product in the second quarter. The week also saw sharp divisions between Republicans and Democrats in Congress over a fiscal package to sustain support for the economy after the expiration of previously enacted aid.

The analgesic for all those headaches has been the Fed, which not only recommitted to its near-zero rate policy the past week but added months onto the timeline of a welter of extraordinary credit and liquidity programs.

“That’s the number-one catalyst” in markets, accounting for probably 90% of recent moves, Michael O’Rourke, chief market strategist at JonesTrading in Stamford, Connecticut, said of the Fed. “That’s going to drive the weak dollar. That’s going to push up anything that’s priced in dollars. So obviously that’s fed into commodities, that’s helped equities.”

— With assistance by Amena Saad