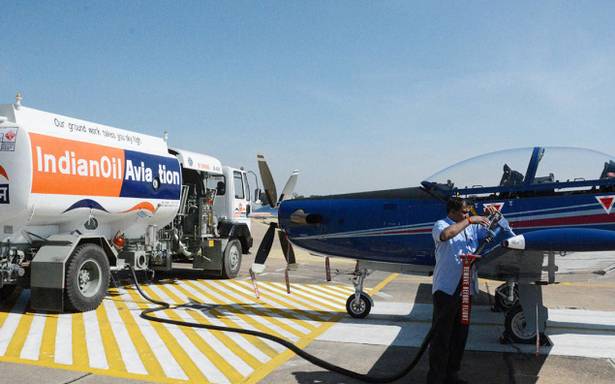 Aviation turbine fuel (ATF) rates went up by ₹1,304.25 per kilolitre or 3% in the national capital to ₹43,932.53 per kl, according to a price notification of state-owned oil companies

Jet fuel or ATF price on Saturday was hiked by 3%, the fifth straight increase in two months, while there was no change in rates of cooking gas LPG, petrol and diesel.

Aviation turbine fuel (ATF) rates went up by ₹1,304.25 per kilolitre or 3% in the national capital to ₹43,932.53 per kl, according to a price notification of state-owned oil companies.

ATF prices are revised on 1st and 16th of every month based on average of benchmark international price and foreign exchange rate in the preceding fortnight.

Petrol and diesel prices, which are revised on a daily basis, were kept unchanged on Saturday.

The price of petrol has not changed for over a month now. It sells for ₹80.43 a litre in the national capital since June 29.

Diesel, on the other hand, has seen sporadic rates revisions. It currently sells for ₹73.56 per litre in the national capital.

Petrol price rose by ₹9.17 per litre between June 7 and June 29 while diesel rates increased by ₹12.55 per litre since June 7.

Cooking gas rates too were unchanged on Saturday.

Non-subsidised cooking gas LPG rates were last revised on July 1 when prices went up by ₹1 to ₹594 per 14.2-kg cylinder in the national capital.

This increase reversed a four-month declining trend in rates. Prices had come down from ₹858.50 in February to ₹593 in June – ₹265.5 in all.

Non-subsidised LPG is cooking gas that a consumer buys after exhausting his or her quota of 12 cylinders of 14.2-kg at subsidised rates.