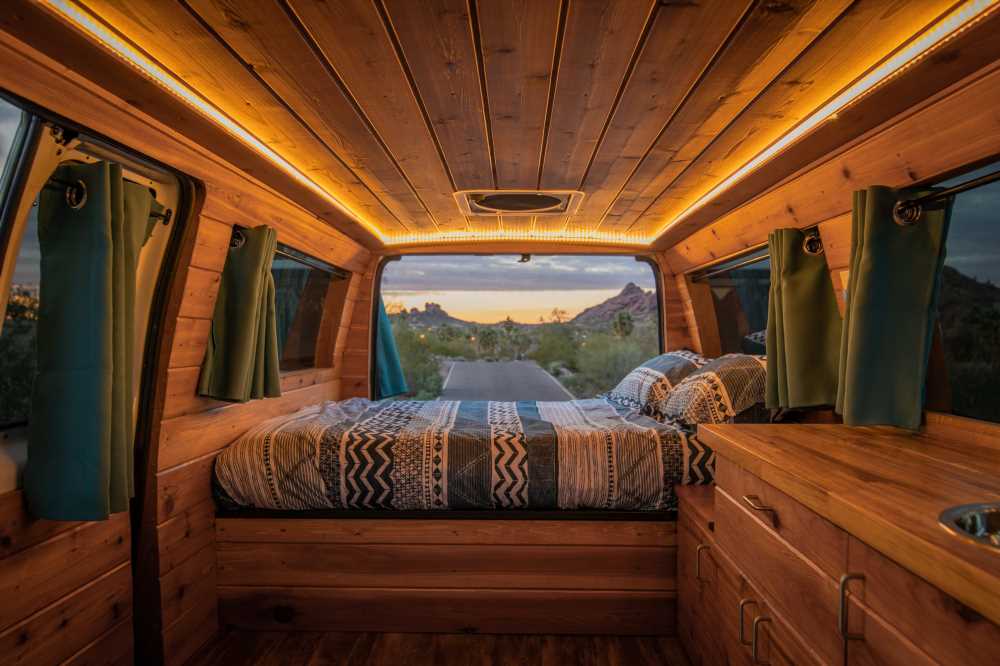 As summer rolls in, many people across America are ready to take a vacation. But with coronavirus cases surging in new hot spots across the country and social-distancing and other precautions as important as ever, experts say one of the safest ways to vacation is heading out in an RV.

Indeed, experts say there's been a massive spike in RV sales and rentals. Outdoorsy, known as the Airbnb of RV rentals, says that it saw its bookings grow by 2,645% in April and May, and 88% of bookings in May were from first-timers.

Craig Kirby, president of the RV Industry Association, says that a new survey showed that 13% of Americans plan to rent an RV in the next 12 months. "This is in line with what we are seeing from RV rental companies across the country who are reporting not only significant increases in rentals, but also increases in the length of the rental trips," says Kirby.

One advantage of renting an RV is that it's easier to maintain healthy social distancing. "RVs are experiencing a participation boom because it's something people can do to get out and see the country, safely and self-contained," says Curtis Coleman, CEO and founder of RVillage, a rapidly growing social network of RVers and RV dreamers that maintains a crowd-sourced guide to open RV parks in every state.

Renting an RV can also be a more affordable way to vacation. Pricing depends on the size of the vehicle you're renting, the length of the trip and the time of year you're traveling, but you can expect to pay $55 a night and up for a trailer, while motorhomes with a kitchen, bathroom and bedrooms start at around $125 a night. An RV vacation for a group of four can cost 21% to 64% less than the cost of a regular trip with airfare, hotels and car rental, according to 2018 study commissioned by the RV Industry Association and marketing group Go RVing.

And while some people prefer the amenities and comforts available at RV parks, it's not a requirement. A growing number of travelers are gravitating toward the concept of "boondocking," which means camping off-the-grid without hookups.  "You find an obscure to park where you can be hiding in plain sight and spend time doing hiking and star gazing, rather than having a campsite," says Bill Staggs, founder of the California-based Vintage Surfari Wagons.

Here's the other thing about RVs: They're changing. While the hulking white behemoth motorhomes that you see on the roadways of America still dominate the business, there's a growing demand for vehicles that are smaller and full of personality, from vintage VW bus campers to teardrop trailers to souped-up Jeep Wranglers. "There is an RV for every price point and lifestyle," says Kirby.

Here are different ways to rent an RV. Each of the companies listed says it has implemented enhanced cleaning and safety procedures in response to the coronavirus pandemic. Similar to car rentals, there are age minimums (generally 21 to 25 years old) that vary depending on the rental company. And you are expected to return the RV with the same amount of gas as when it was picked up. Some companies offer options to prepay for gas and propane, which is used for appliances such as the stove.

Outdoorsy is a peer-to-peer marketplace that offers access to more than 40,000 RVs around the world in over 4,800 cities across 14 countries. Outdoorsy specializes in personality-filled vehicles (from campervans to Airstreams to motorhomes and exploring the great outdoors. For instance, you can take a trip in the Wooden Truck Camper in Colorado, explore California with a 16-foot Bambi Sport Airstream, see Brooklyn, New York in a funky 1967 Ford Econoline Club Wagon or explore Minnesota with a 12-foot Custom Teardrop Camper from 1945. You can also check off options like pet-friendly and many owners are willing to deliver the rig to your campsite and get everything set up for your arrival with a contact-free key exchange.

Another peer-to-peer marketplace, Akron, Ohio-based RVshare operates with a similar business model to Outdoorsy, but with a focus on the U.S., offering access to more than 100,000 RVs across the country. The inventory of individually-owned vehicles ranges from luxury motorhomes to travel trailers. You can choose from options like a farmhouse-chic 2019 Palomino Puma XLE Lite in Jacksonville, Florida, a fully loaded  2014 Ram Promaster Van in San Diego, or a fully loaded Airstream trailer named "The Chattanooga Lucy" outside Indianapolis.

Costs for RV rentals vary depending on the type of vehicle with the average nightly rate coming in at $150.

Known for its bright green and purple campervans and mini-RVs, the family-owned Jucy started in 2001 in Auckland, New Zealand with just 35 rentals and soon expanded to the U.S. and Australia. In the U.S., the company has locations in Los Angeles, San Francisco and Las Vegas. Most renters explore the West, but many times the vans are used for cross-country trips and expeditions as far away as Alaska.

The costs are seasonal and can be as low as $20 a night during winter (November to February), capping out during the peak summer season at around $150 a night.

With their colorful exteriors, there's no mistaking a rental from Escape Campervans. The company rents custom-built vans that are all hand-painted by well-known street artists. The company operates out of 10 locations across the U.S., including New York, Miami and Portland, Oregon. There are currently four models of vehicles to choose from, all set up with propane stoves, fridges and more.

Rates start at $39.99 per day in June out of select locations.

The adventure-focused Overland Discovery specializes in turn-key camper rentals outfitted for outdoor travel. The company started its business offering rugged Jeep Campers but has since expanded to campervans and compact RV rentals. Each vehicle comes equipped with cooking facilities (from a basic camp stove to a kitchenette), bedding and camping gear. Rentals can be taken anywhere in the continental United States, but most guests visit Colorado and surrounding states (Utah, Wyoming, Arizona and Nevada).

Rates start at $130 a night for a Jeep Renegade Camper, the most economic model. Customers can purchase extras to enhance the experience, including fridge upgrades, bike racks, hammocks and more.

With rental locations in Washington, Oregon and Idaho, Peace Van Rentals helps guests explore the Pacific Northwest in classic Volkswagen camper vans and modern Mercedes pop-up campers. The company offers both rentals and itinerary planning (and can also sell you a tricked-out camper or soup up an old van). The charismatic owner, Harley Sitner, says he has helped families recreate road trips from the '70s based on photos from their childhood trips.

Rates start at $225 a night with minimum rentals of six nights, though the company recently reduced its minimum to four nights as part of its new "Save our Summer" campaign.

According to owner Bill Staggs, the campers offered by Vintage Surfari Wagons actually are your grandmother's RVs. The California-based mom-and-pop company has a fleet of vintage Volkswagen vans and buses for rent. "This is about slow cruising," says Staggs, who likens renting an old VW to the road trip equivalent of slow travel. "It's a savory experience rather than a blazing experience."

Rates in the low, winter season start at $129 a night with the most expensive car in the middle of summer renting for $219 a night, with a three-day minimum. In addition to private rentals, the company also offers group trips to places like California's Death Valley.

The Arizona-based Boho Camper Vans was recently featured on ABC's "Shark Tank," and Barbara Corocoran became an early investor. As the name suggests, the company has a bohemian vibe and specializes in Instagram-worthy van restorations that feature sleek wood interiors. In addition to renting six stylish vans out of its Tempe headquarters, just outside Phoenix, the company also sells custom vans and helps plot itineraries in the area (though no off-roading allowed).

Located in Denver, Las Vegas, Seattle and Bozeman, Montana (near Yellowstone), Campervan North America was founded with the idea that people want to explore the American West, but not in a big motorhome. The sustainably focused company rents out five models of campervans that are easier to drive than massive motorhomes and helps travelers find ways to get off the beaten path.

Rates for the smallest vehicle, the Edelweiss, start at $68 a night through June, then rise to $80 a night starting in July.

Don't miss: What are the safest ways to vacation this summer? From traveling by RV to renting a beach house