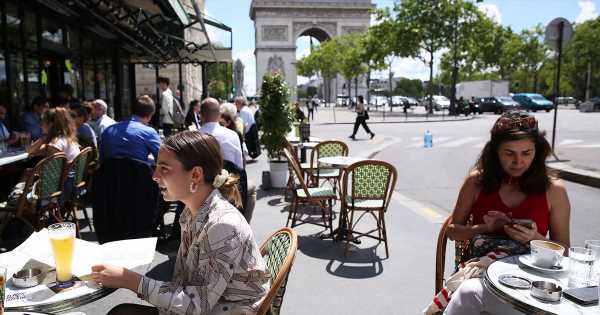 As Covid-19 spread, sending almost every country into some form of lockdown, governments began to wonder how best to keep track of the deadly virus. Contact-tracing apps seemed a sensible solution.

But everywhere you look, tech has failed to deliver. In France, less than 3% of the population has downloaded StopCovid. The U.K. missed an initial rollout deadline and has chosen to start over using another platform. Tracing apps in the U.S. have been caught in a social media war about whether virus news is real or fake, while Australia’s COVIDSafe hasn’t detected a single case despite 6 million downloads. Singapore’s TraceTogether was an early entrant, but even its government began distributing portable tokens this week to complement the app. The one nation with a modicum of success has been China, but only because authorities made the technology mandatory and imposed privacy practices that would be unacceptable elsewhere.

The value of contact-tracing apps is “really questionable,” says Sean McDonald, a senior fellow at the Centre for International Governance Innovation, an independent think tank based in Canada. “The underlying science of proximity as a good indicator of infection relies on a whole bunch of other variables, like whether or not you’re wearing a mask, or whether or not you’re outside.”

Contact-tracing apps use smartphones to track a person’s whereabouts, alerting users if they’ve been in contact with someone who’s had the disease. They’re designed to help supplement the traditional, labor-intensive approach to contact tracing, which involves hundreds of people interviewing those who have been exposed and painstakingly piecing together information about what they did and who they may have come into contact with. In the absence of a vaccine, digital technology was seen as critical for getting people back to work faster and economies up and running.

Apps can either use GPS data or Bluetooth radio signals. Bluetooth is less intrusive from a privacy perspective. The technology works by sending electromagnetic “handshakes” between phones that are within range. If someone gets sick, those “handshakes” can be uploaded to a central server, which can then search for matches to other phones, notifying people who were within range of the diagnosed patient.

One of the biggest issues is making sure there’s a critical mass of people signing up. The apps, most of which are voluntary, need a significant number of users if they’re ever going to be effective. A University of Oxford study published in April and based on a simulation of an urban population of 1 million found virus transmission could be suppressed if at least 80% of smartphone users—which amounts to about 56% of all people—participated. That’s a very high number. Even in Singapore, which has a largely compliant populace used to following government orders, only 35% of people have downloaded the app, among the highest take-up rates in the world.

In Norway, one of the first countries in Europe to launch a national contract-tracing app, active users dropped to around 600,000, or 11% of the population, before the nation’s data protection authority said the software posed a disproportionate threat to user privacy and pulled the plug. Norway’s app, called Smittestopp, used both GPS and Bluetooth to warn users when they had come in contact with someone who’d tested positive, something the watchdog said was too invasive.

Winning the support of privacy advocates doesn’t necessarily help either. Austria’s Stopp Corona app has the backing of Max Schrems, a local author known for his campaigns against Facebook Inc. for privacy violation. So far, it’s been downloaded about 635,000 times in a country of almost 9 million.

In the U.S., states like New Jersey and California that initially expressed interest in contact-tracing apps have put those plans on the back burner in favor of human tracers. The situation hasn’t been helped by vocal conspiracy theorists who’ve posited contact tracing is part of a sinister plan to force children into government camps, according to the Institute for Strategic Dialogue, a think tank that researches extremism. Posts supporting these false assertions have gotten hundreds of thousands of shares and views.

Another reason digital contact tracing hasn’t been a success is the technology itself. Bluetooth uses radio waves, the same spectrum employed by FM radio, Wi-Fi, and cellphones. Getting a reliable signal can be challenging because radio waves can be interrupted by objects in the way, like telephone poles, walls, or tables. A mobile phone in someone’s back pocket, or at the bottom of their bag amid a jumble of other things, isn’t going to be able to transmit as strong a signal as a device in someone’s hand.

For example, if a person is standing on one side of a plexiglass barrier, and another is standing on the other side, Bluetooth can erroneously say the person is exposed to the virus, says Phil Zimmermann, an American computer scientist who created Pretty Good Privacy, the world’s most widely used email encryption software.

“So there’s the problem of efficacy,” he says. “It’s hard to get everyone to run the app, and even if you do, then you have surveillance capability that could be repurposed after the pandemic and lead to dystopian results.”

Bluetooth “was obviously a bit ambitious from the start to anyone who’s worked with radio,” says Ross Anderson, professor of security engineering at the University of Cambridge. Because the technology isn’t designed to detect exact range, it can result in false positives and negatives, missing a large portion of significant contacts, he says.

That hasn’t stopped Apple Inc. and Alphabet Inc.’s Google teaming up to use Bluetooth to create a technology platform other countries could then employ to run their own app on. The pair say their system will more reliably use Bluetooth connections between devices to log users in physical proximity for at least five minutes. Authorities in more than 20 nations have sought access, the companies announced last month.

But no matter how sophisticated the technology, sometimes there’s no substitute for old-fashioned human interaction. Two of the most successful countries in containing Covid-19—South Korea and Taiwan—have relied to a large degree on armies of real people doing boots-on-the-ground contact-tracing work, as well as aggressive testing.

Vivian Balakrishnan, the minister in charge of Singapore’s Smart Nation Initiative, said in a Facebook post that “we need to entrust human contact tracers with information during this crisis.” Contact tracing “remains a human endeavor requiring human judgment,” he said.