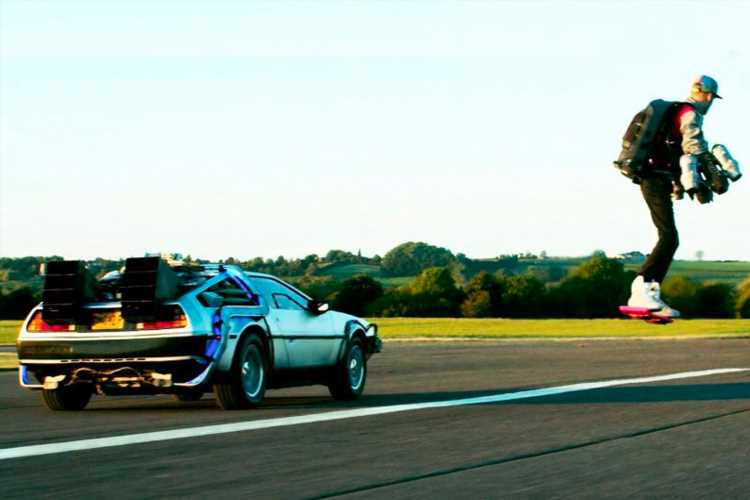 A BACK to the Future super-fan has fulfilled a lifetime ambition after flying his very own "HOVERBOARD". 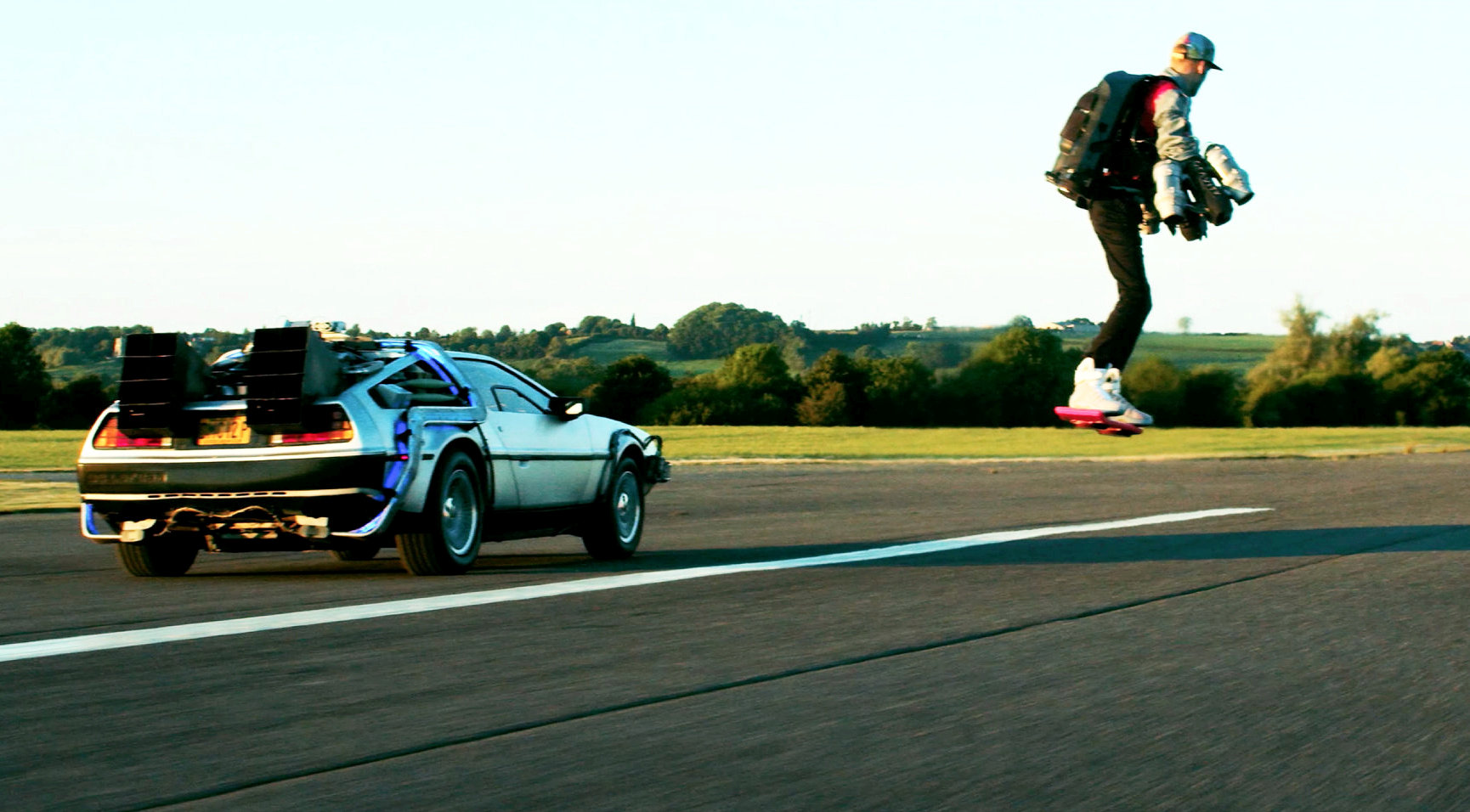 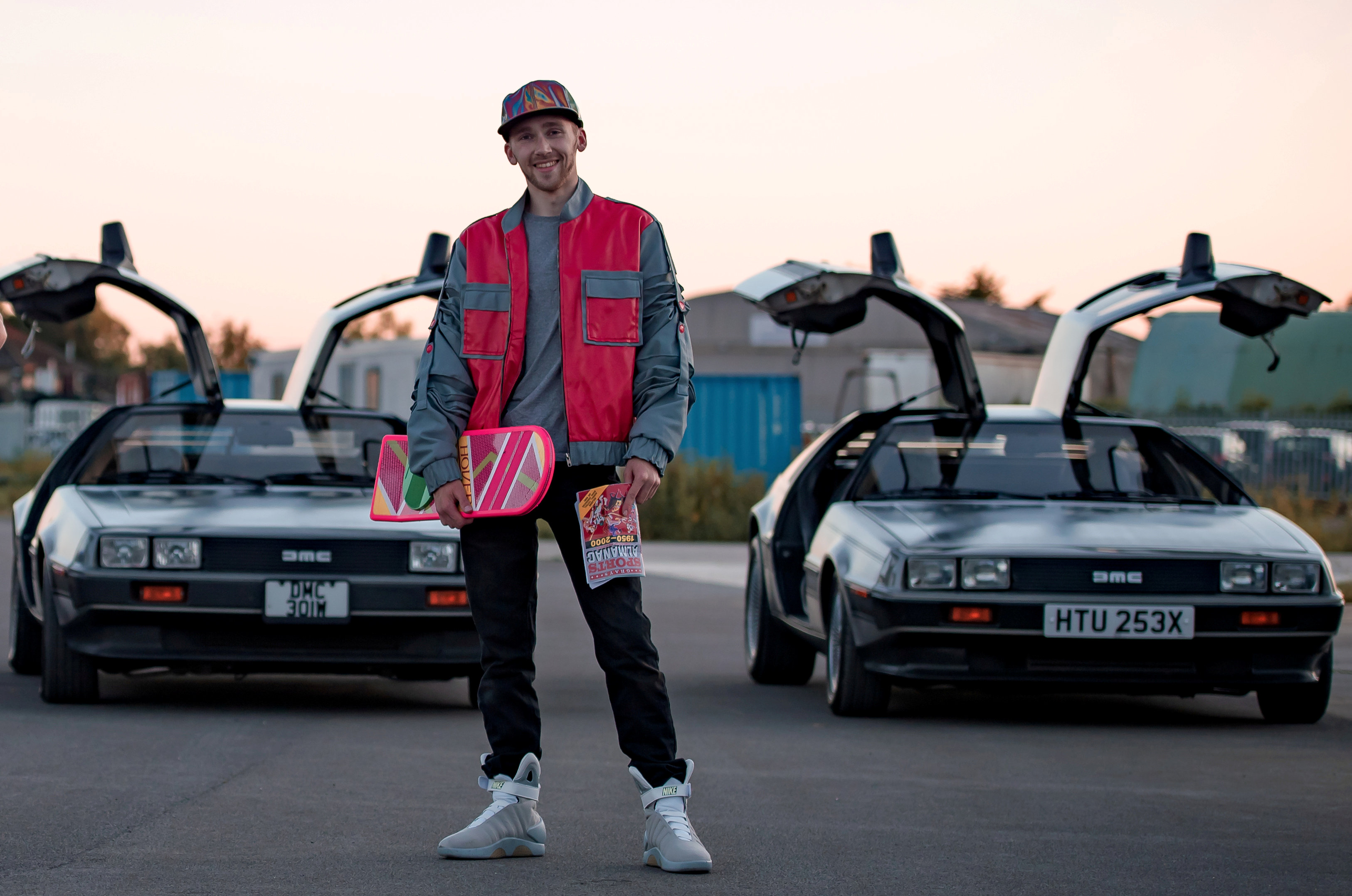 Breathtaking images show the technology nut flying through the air along a runway with the help of a £340,000 3D-printed jet suit, which he designed.

Complete with authentic Marty McFly jacket, cap and sneakers, Sam can be seen in the slick video soaring alongside one of the most iconic movie cars of all time.

It is believed to be the closest anyone has come to flying a real-life working hoverboard made famous by the 1989 blockbuster Back to the Future Part II. 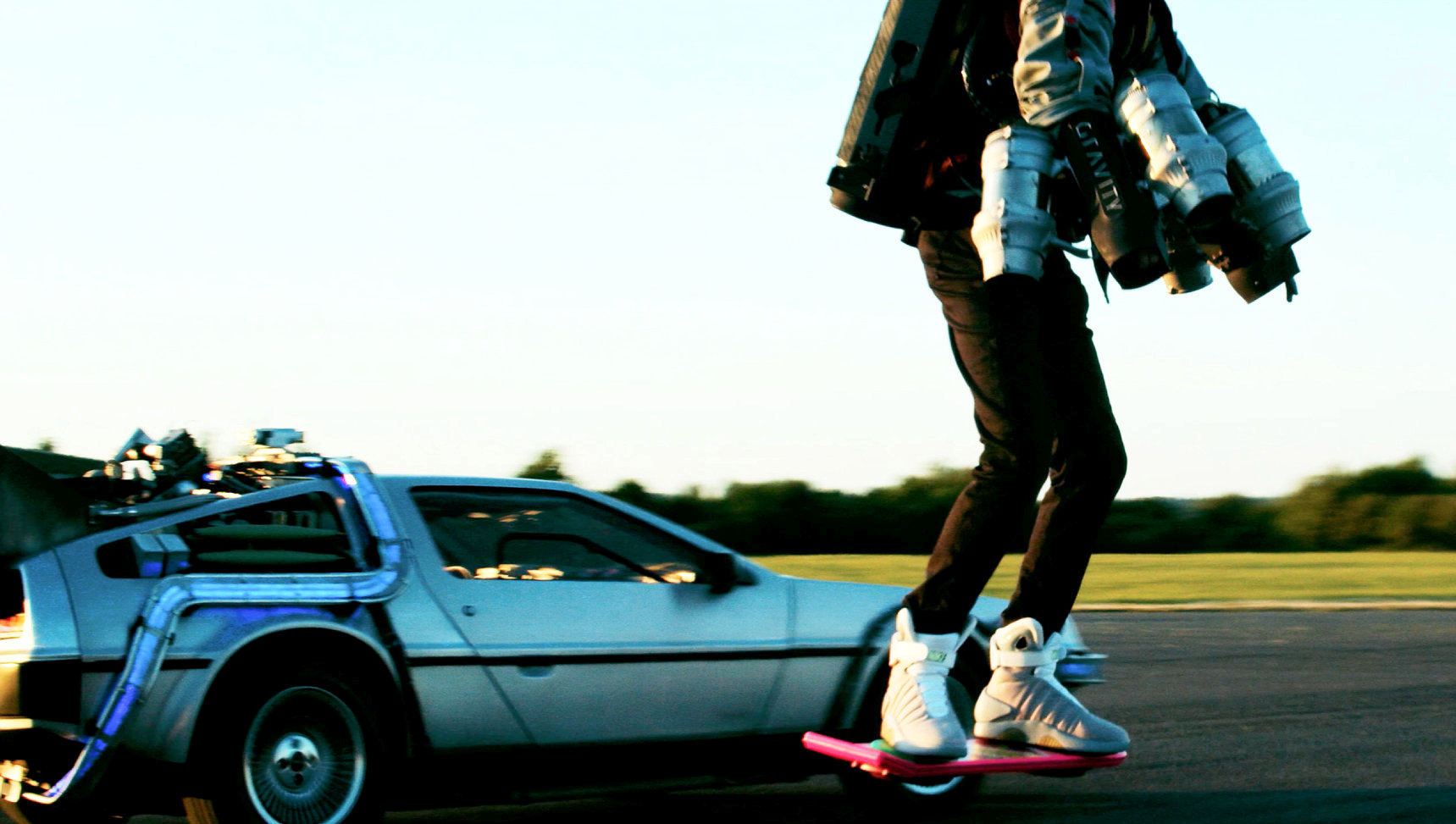 He said the Back to the Future films had always played a part in his childhood and inspired his fascination with flight, aerospace and design.

Sam, who was given a toy DeLorean as a tenth birthday present by his grandparents, said being able to fly a hoverboard for real was "a dream come true."

He said: "I never thought I would even sit in a DeLorean, let alone capture something this cinematic – bringing a hoverboard probably as close as it has ever been to actually hovering.

"For my tenth birthday I was given a DeLorean time machine, the design of this car was just the coolest thing in the world and more so the way the second movie illustrated flight.

"In the film the vehicles didn't need speed to take off, they hovered. There's something about hovering that is just so magical to witness.

"So I did the age ten equivalent of research, downloaded a load of hypothetical hoverboard plans and started sketching my own with fans, engines and magnets trying to work out how close this could come to reality.

"Now I'm 24, I helped design and pilot a jet suit, designed by former Royal Marine Richard Browning, which allows a pilot to fly with the minimal equipment possible.

"I work on the design of the suit which is mainly 3D printed in metal and polymer." 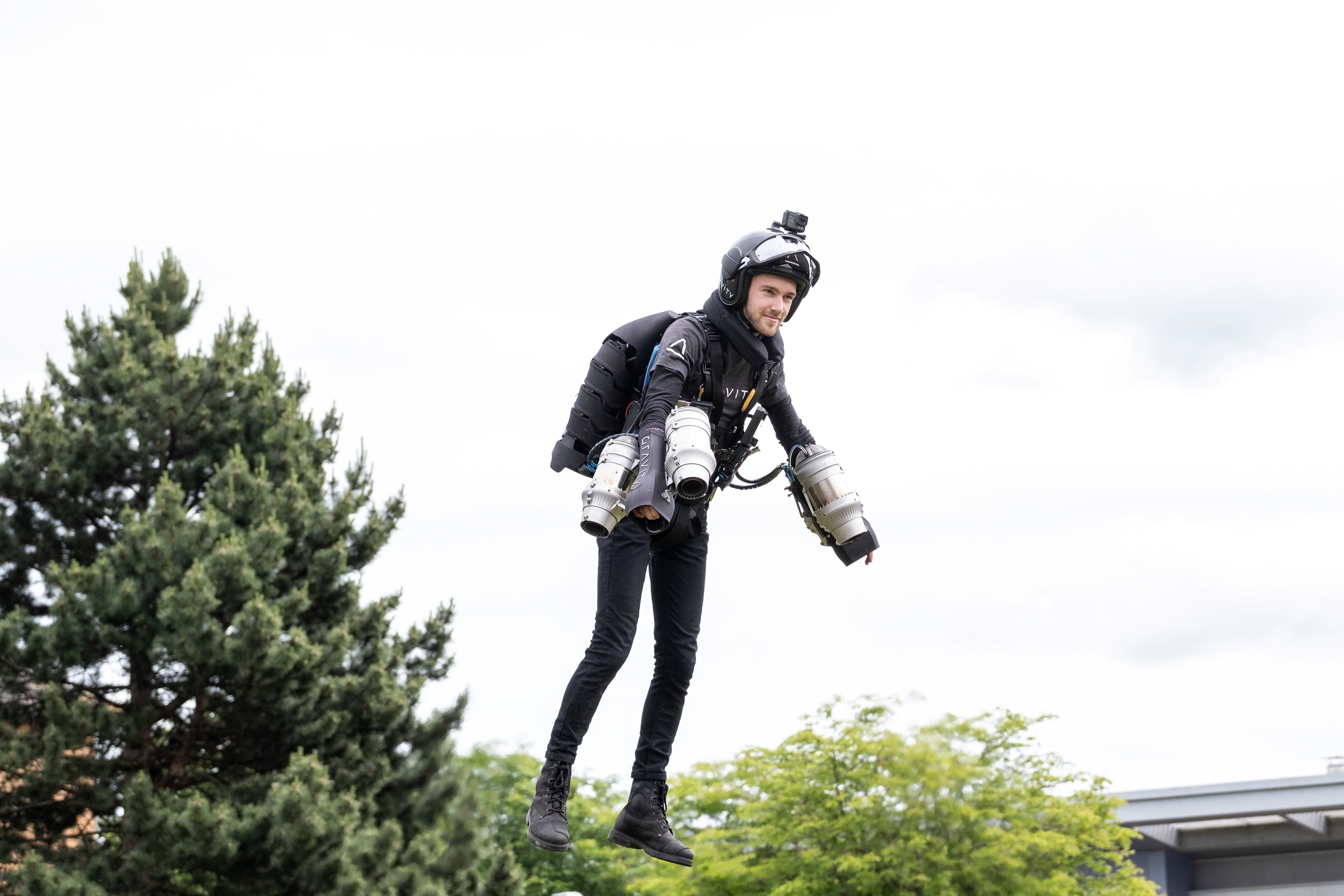 The 1,000-brake-horsepower jet suit, which is made from aluminium, nylon and steel, weighs 27 kilos and is the fastest in the world – capable of doing 50mph.

It has kerosene-fuelled turbines on the back and on the arms, each with 50 pounds (22kg) of thrust, with the controls located inside the grip handles.

Sam, who graduated from Loughborough University last year, came up with the idea of using his groundbreaking invention to help create a real-life hoverboard.

But first he had to learn to fly the jet suit with a hoverboard attached to his feet with velcro. 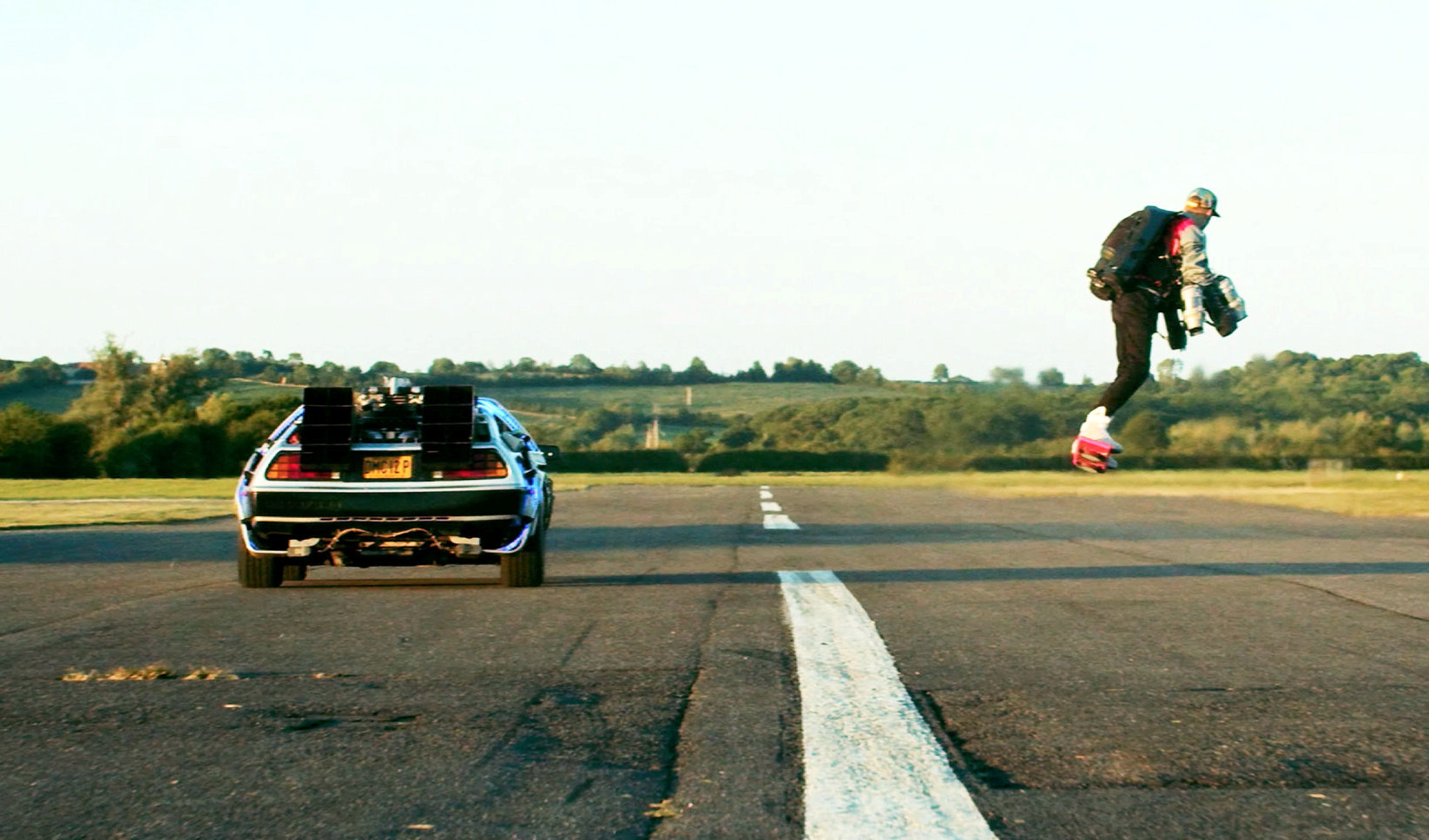 He said it proved tricky to master, as he usually relies on both legs for landing, but he soon got the hang of it ahead of the shoot at a UK-based airfield on May 23.

Sam, from Salisbury, Wilts., added: "Last summer I had the idea to try and fly with the hoverboard attached to my feet.

"At first it was pretty wobbly, having both feet bolted to one platform while you fly feels pretty weird. You use your legs a lot while landing.

"But after a few tries I got stable enough and now we had a flying hoverboard – all we needed now was the car." 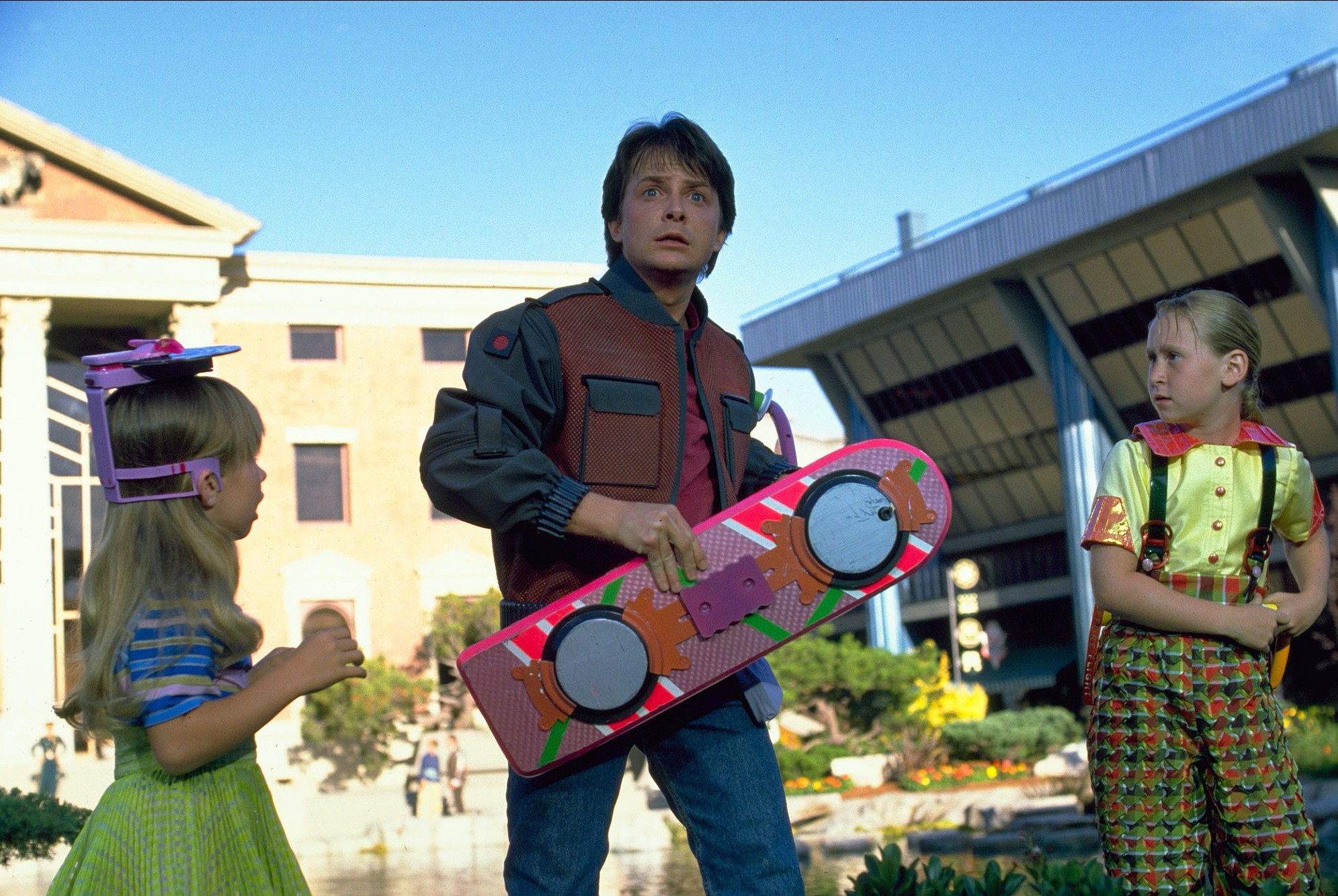 Sam spotted a replica of the movie model while showcasing his jet suit at Yeovilton Air Show in Somerset last year and got chatting to the owner.

He said: "The owner Tom had built a fully modified time machine DeLorean and even more ludicrous, he was willing to let me fly alongside it.

"We were all set – we had the car, the hoverboard and the gravity jet suit to make it fly.

"We did the shoot on a runway at an undisclosed location in the UK on the weekend of May 23.

Here are the key stats

"It's just one honest shot, there's no trickery involved, showing the time machine and hoverboard gliding down the runway together.

"Landing on the hoverboard is hard, the plastic slips along the tarmac where your boots would usually grip.

"This time we were using velcro on the bottom of the boots, which meant I could tear away from the board if I ever needed to.

"With the appropriate cap, jacket, Grays Sports Almanac and the toy Delorean in my back pocket I was ready to go and we boarded over to the launch point.

"We did it in two takes. On one of the takes I had a bit of crash landing, apart from landing on my backside on that little toy Dolorean, all was fine.

"The shots still came out great and I was delighted with the results. As a lifelong Back to the Future fan, it really was a dream come true."

In other news, an ex-Marine who designed a 50mph ‘Iron Man’ jet pack is in talks with US Navy Seals and Royal Marines for special forces to use.

A daredevil scientist plunged into the sea at Bournemouth Air Festival after the engine on his jetpack ignited.

And, here are the weirdest things lost by Uber passengers – including a jetpack and a bulletproof vest.

What do you think of the Iron Man suit? Let us know in the comments!