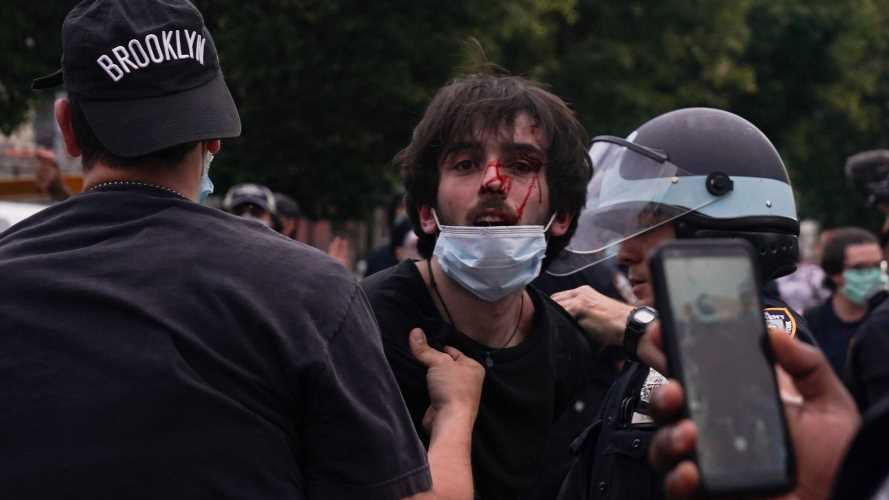 As protests against police killings and inequality stretched into their fifth night in cities across the U.S., law enforcement officers geared up to go to battle with their own citizens. And in some cases, police brutality was on full display.

It was a weekend of violence between American authorities and the citizenry. Over the course of several days of protests ― prompted by the police killing of George Floyd in Minneapolis and other deaths and instances of injustice ― major cities burned as protesters lashed out at police and the government.

The authoritarian response to those demonstrations was often cruel.

Linda Tirado, a freelance writer in Minneapolis, says she’s “permanently blind” in her left eye after allegedly being hit by a rubber bullet or tracer round fired by authorities on Friday. Tirado said she’d identified herself as press but was shot with a projectile anyway.

Reports and videos have emerged from all over the country of police firing so-called “less-lethal” rounds at protesters, shoving them to the ground or otherwise beating them, and using other means of force.

On Saturday, the reports were similarly dire.

In Louisville, Kentucky ― where people have taken to the streets in memory of Breonna Taylor, the 26-year-old former EMT shot and killed by officers serving a warrant at her home ― reporters posted video of officers apparently confiscating and destroying water stores held by protesters.

The night before, Louisville police fired what appeared to be pepper balls directly at Kaitlin Rust, a journalist at WAVE 3, and her crew. The company caught the attack on camera.

In New York City on Saturday, an NYPD cruiser was caught on video careening into a crowd of protesters. It was unclear how many were injured. Mayor Bill de Blasio reportedly called the incident “troubling” in an interview with NY1, but it wasn’t clear whether there would be an internal investigation.

Officers in various places reportedly continued to target journalists on Saturday. HuffPost senior reporter Chris Mathias was detained amid protests in Brooklyn, New York, after reportedly identifying himself as a member of the press. Mathias, who covers the far right, disinformation and hate, had been reporting for days on the protests, and was wearing a press identification card around his neck at the time of his arrest.

In Minneapolis, police reportedly fired tear gas at reporters “at point blank range,” and a Vice News reporter says he was thrown to the ground, held down and pepper sprayed by police after identifying himself as press.

Early Sunday morning, a reporter in Minneapolis said authorities shot out his car window with “live rounds,” and posted pictures of himself bleeding from his face and arm.