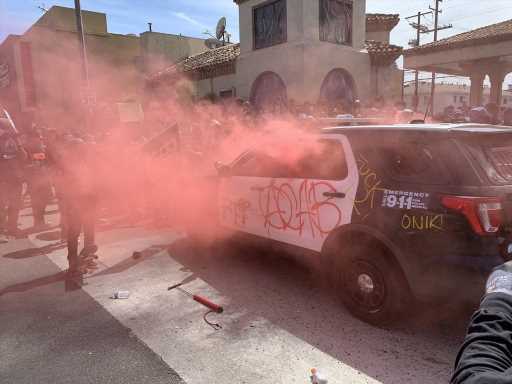 Protesters clashed with police officers Saturday in Los Angeles near the Grove, as demonstrations over the police killing of George Floyd in Minneapolis spread across L.A.

In the Fairfax District, thousands of demonstrators took over the intersection of Third Street and Fairfax Avenue, shutting down traffic.

Police formed a skirmish line along Third Street near Fairfax Avenue just after 2:30 p.m. with more than a dozen police vehicles. Still, some people climbed on top of buildings and a commuter bus.

Others smashed the windows of a police cruiser before it went up in flames, sending thick smoke tinto the air. Firemen would not enter the area without police protection, according to news reports.

This latest unrest came after days of skirmishes in downtown L.A., after protesters — led by Black Lives Matters — blocked freeways touching off melees.

This afternoon as the situation in the Fairfax District spiraled out of control, Mayor Eric Garcetti held a briefing at 3:40 p.m. and announced a curfew in downtown L.A.

“My first responsibility to you is to protect life and liberty,” Garcetti said.

He then spoke of other recent police killings of African Americans, but said violent protests are not the answer.

“When the violence escalates, no one wins,” Garcetti added. “I’m asking all of Los Angeles to take a deep breath and to step back.”

Moments later, he announced a curfew in downtown L.A., “so that we can clean up the debris.” The curfew starts at 8 p.m. tonight until 5:30 a.m. Sunday, in an area bounded by the
“four freeways.”