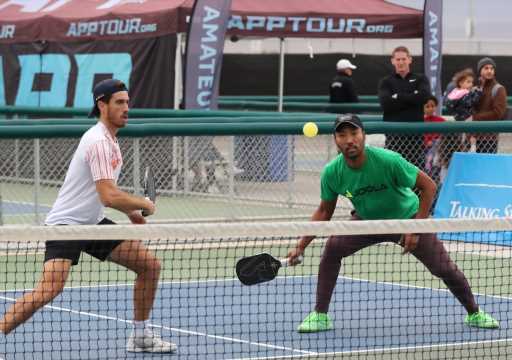 In the latest sign of maturation for a quirky but rapidly growing racquet sport, the Association of Pickleball Professionals has set broadcast deals with CBS Sports and ESPN.

The pacts cover hundreds of hours of APP Tour pickleball programming in 2023, including 12 hours of live matches and highlights on CBS Sports Network, eight hours of recaps on ESPN2 and 200-plus hours of live coverage on ESPN+. The league also will have coverage on its own outlet, APP TV.

The APP is one of a handful of new professional outfits aiming to take advantage of booming interest in the sport, which combines elements of tennis, pingpong and squash. LeBron James, Tom Brady and Kevin Durant recently announced investments in Major League Pickleball, which competes with the APP as well as the Professional Pickleball Association. Recreational players have flocked to the sport by the millions, encouraged by the fact that it does not require an intense amount of physical exertion. Meanwhile, those living near pickleball courts — which are replacing traditional tennis courts in some parts of the country — increasingly have become unsettled by the resounding “thwack” made by racquets hitting balls.

“We are delighted to welcome CBS Sports and ESPN to the APP and are excited to be working with two of the most significant names in sports media to bring the sport of pickleball to fans across the country,” APP Chief Marketing Officer Tom Webb said. “Over 36.5 million Americans played pickleball in 2022 and this media package enables those fans to tune in to our world-class tournaments, and introduces the sport and its best players to millions more.”

The APP’s fourth season kicked off this month in Punta Gorda, FL, with an event featuring 720 professional and amateur pickleball players from across the U.S. and the world. The 2023 APP Tour continues with the APP Daytona Beach Open in February.