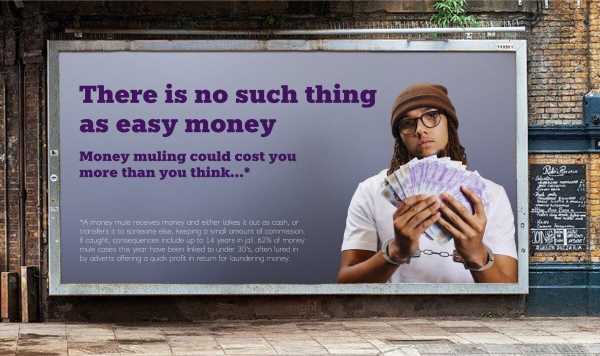 This type of fraud is being disguised as job adverts online offering an easy way to make quick money – where you keep a “commission” after sending the funds elsewhere.

However, more than three-quarters (78 percent) of respondents have no idea what a money mule is, with a quarter thinking it is someone who tops up cash machines with money.

And 59 percent were not aware this type of activity could be illegal – as another 15 percent believe money laundering either involves putting money through the washing machine, or hanging it out to dry.

Figures from fraud body Cifas shows there have been 18,626 cases linked to money mule activity from under 30’s so far this year – accounting for 62 percent of all cases.

The research was commissioned by NatWest to raise awareness of money muling – which sees their “honest job ad” run across social media, starring Perri Kiely as a “recruiter” advertising the perks of being a money mule, while showing the realities the criminals behind them don’t want you to know.

Stuart Skinner, fraud and scam expert at the bank, said: “Now more than ever, everyone is becoming more mindful of money, which is put under even more pressure by the increased outgoings during the festive season.

“We want to help young people be safe when it comes to their finances, and make sure they are aware of the dangers that unfortunately exist in our society through money-muling and online scammers, so they know what to look out for.”

Four in ten young adults (39 percent) adults have been targeted by “quick money” job ads on social media, with 74 percent seeing an increase in these type of adverts in the last two years.

And of those, 91 percent said the number they see has more than doubled.

But the survey shows many young people are totally unaware of the consequences of acting as a money mule.

Nearly eight in ten (79 percent) didn’t know you can go to prison, while 81 percent didn’t realise you would no longer be able to get a bank account.

And 89 percent had no idea you would no longer be able to take out a phone contract if caught.

And with 59 percent of young people feeling the pinch as they struggle to afford Christmas presents, the concern is they will be more easily drawn in by fraudulent “easy money” schemes.

In fact, 87 percent of these said they would be open to ways to make some extra cash to help fund their outgoings during the festive season.

And four in ten polled, via OnePoll, also said due to the cost-of-living crisis, they would be more open to opportunities they see online to make a bit of extra cash.

Perri Kiely, who also features in billboard-style posters showing some of the realities money mules could face if convicted, said: “It’s hard not to be tempted by the offer of quick cash.

“These types of ads, which play on the supposed opportunity to make a little extra money – particularly during what are harder times for many people – are something I see all the time on my social media.

“Being part of this very honest job ad has taught me that, as the saying goes, if it sounds too good to be true, then it probably is.

“We all need to be watchful for the signs, and educate ourselves and everyone around us about how to avoid them.”