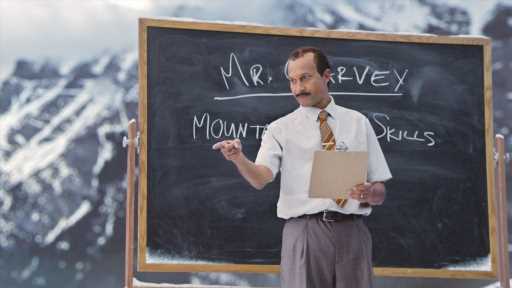 Keegan-Michael Key’s substitute teacher Mr. Garvey, one of the signature characters from former Comedy Central sketch series Key & Peele, has returned to the head of the class to promote Paramount+.

The streaming service has booked a 60-second spot during tomorrow’s Thanksgiving Day NFL telecast for the plug (watch it above). The synergistic promo features Mr. Garvey atop “Paramount Mountain,” reprising the gag from the show in which he mispronounces every name on the attendance sheet, browbeating students into agreeing with his aggressive malaprops. Instead of human students, most of those with speaking lines (apart from NFL player Aaron Donald) are animated characters from Paramount/Nickelodeon shows like Big Nate, Blaze and the Monster Machines, Dora the Explorer and Blue’s Clues.

Parent company Paramount Global has used the mountain backdrop as a cornerstone of its “news, sports and a mountain of entertainment” ads for Paramount+ ever since rebranding it from CBS All Access in early 2021. Paramount+ is in the midst of a big end-of-year subscriber push, which will get a boost in December when Top Gun: Maverick makes its streaming debut. The service had 46 million global subscribers as of Sept. 30, and also got a boost from the premiere of Tulsa King as well as NFL football, saying last week that the combination drove a record number of subscription additions in a single day.

Another strategic move that looks to be a tailwind for Paramount+ is the decision earlier this year to make Showtime’s streaming service available as an opt-in within the Paramount+ app. Previously, the two services were kept separate, though they were bundled together in 2021 as a single-price package.

Tomorrow’s CBS game, one of three NFL contests on the schedule, features the Buffalo Bills taking on the Detroit Lions. It’s a promising matchup, if not quite the marquee late-afternoon draw the network had last year, when nearly 38 million viewers tuned for the Dallas Cowboys and Las Vegas Raiders. Paramount+ streams NFL games and other CBS programming live, a vestige of the CBS All Access offering that remains a subscriber draw.