The economic and social crisis that’s driving support for Italy’s hard right ahead of the September 25 elections is making the eurozone’s third-largest economy vulnerable to even deeper infiltration by organised crime.

In a speech in May, one of his last before the collapse of his government, now-caretaker Prime Minister Mario Draghi warned that organised crime had “assumed new but equally fearful forms.”

Beyond violence — and the threat of violence — “organised crime has insinuated itself into the boards of companies,” he said. “They pollute the economic fabric from the real estate sector to wholesale supply chains.”

In its search for profit and power, organised crime – from the Cosa Nostra in Sicily, to the Camorra in Naples, and the ’Ndrangheta in Calabria — has extended its tentacles from the south deep into Italy’s wealthy industrial north. Overall, Italy’s criminal groups control about 9 per cent of the economy, according to various estimates. 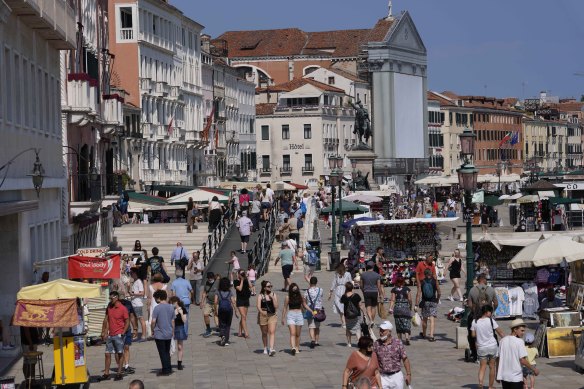 Italy’s criminal groups control about 9 per cent of the economy, according to various estimates.Credit:AP

Draghi’s immediate concern was the risk to the €260 billion euros ($387 billion) of European Union recovery funds programmed for Italy by 2026. While mobsters found new ways of making money during the pandemic – muscling in on mask production and funeral services – the EU cash offers a fat new target.

As Europe faces the bleak winter of a conjoined economic and energy crisis, police officials and crime experts are sounding a new alarm about mafia groups acquiring businesses at risk of default. It’s a problem across Southern Europe, but Italy is at particular risk as small and midsized firms make up some 80 per cent of the economy. Criminal ownership of business is a nightmare scenario that would undermine the legitimate economy, distorting competition, rule of law, and the social fabric. Worse, it’s already happening.

Milan Police Commissioner Giuseppe Petronzi recently warned of “a military operation” by the southern mafia to infiltrate the north, one of Europe’s wealthiest regions. Recent data suggests that’s not an exaggeration.

Italy saw a 9.7 rise in the number of companies investigated by the financial police due to suspected mafia activity between March 2020 and February 2021, the latest data available, according to Vittorio Rizzi, the nation’s deputy director general of public security. The Rome-based research group Demoskopika has estimated some 4,500 firms were at risk of mafia infiltration after the COVID-19 crisis, especially those in tourism and restaurants and bars.

The risk Italy faces now is a proliferation of what the United Nations Office for Drugs and Crime calls “the mafia entrepreneur.” Italy was the first country where this role was identified more than a decade ago.

Specifically, “the mafia entrepreneur” typically involves an adherent to an organised crime group – with identities concealed by a shell company — taking a minority stake and effective control of a legitimate business. I recently asked Michele Riccardi, deputy director and senior researcher at Transcrime, a Milan research centre on transnational crime, how bad he thought mafia infiltration of Italian business could get. “I cannot imagine it being any worse than it is,” he responded glumly.

The cost falls on everyone because the commercial dysfunction wrought by the mafia can substantially reduce per capita GDP growth, according to a study published in August by a trio of Bank of Italy economists. 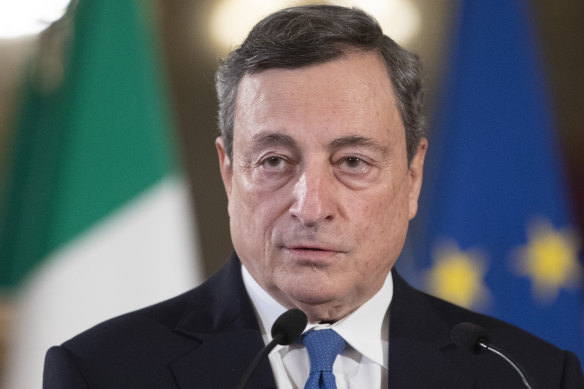 Italian Prime Minister Mario Draghi warned in May that organised crime has “insinuated itself into the boards of companies” across the country.Credit:AP

How then can organised crime’s deeper penetration into legitimate commerce be confronted? Big data can lend a hand. Transcrime recently signed a three-year agreement with the financial police in Lombardy, the region around Milan, to use big data to track anomalous applications for post-pandemic funding, and oddities in the structure of company acquirers.

The hope is better computer-driven analysis will work faster than criminals can insinuate themselves into the corporate system. And cutting out human involvement can overcome other obstacles to detection too – such as fear. One local entrepreneur in the Veneto region I spoke to described a rash of small family-owned firms going up for sale since the pandemic. “We know who is selling, but we have no idea who is buying. And sometimes it’s just better to mind your own business and not ask,” he said, asking not to be named.

Enrico Letta, leader of the Democratic Party, which is running second to Giorgia Meloni’s far-right Brothers of Italy, has warned of a coming “social and economic crisis” this winter. That’s only going to push more companies to the brink. It doesn’t help that Meloni’s campaign is fanning fears of a breakdown in law and order. Nor does it help that one of Meloni’s allies, the disgraced tycoon Silvio Berlusconi, has spent two decades denying allegations of mafia links.

Draghi is widely considered to have brought stability to Italy. A revival of concern about the rule of law is only going to make foreign companies even more reluctant about investing in a sluggish, debt-riddled economy. Depressingly, that may leave Italy more exposed to the infiltration of organised crime into the fabric of its industry and society.