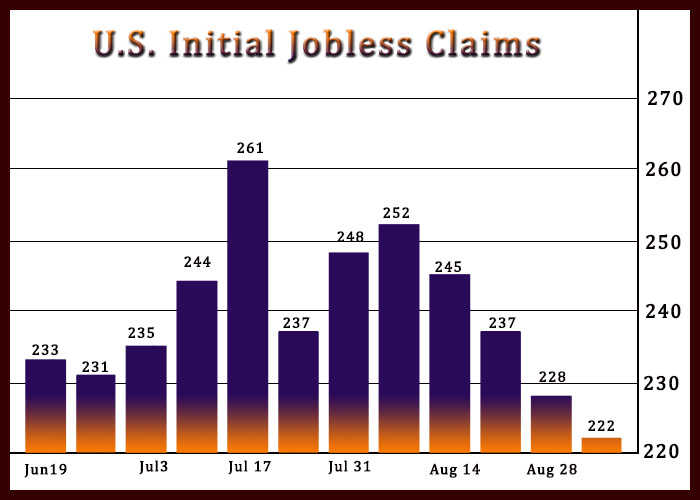 First-time claims for U.S. unemployment benefits unexpectedly showed a modest decrease in the week ended September 3rd, according to a report released by the Labor Department on Thursday.

Economists had expected jobless claims to inch up to 240,000 from the 232,000 originally reported for the previous week.

With the unexpected dip, jobless claims fell to their lowest level since hitting 202,000 in the week ended May 28th.

The Labor Department said the less volatile four-week moving average also slipped to a two-month low of 233,000, a decrease of 7,500 from the previous week’s revised average of 240,500.

She added, “As a result, employers are more likely to continue to slow the pace of hiring than to lay off a significant number of workers, at least in the near term.”

Meanwhile, the report said continuing claims, a reading on the number of people receiving ongoing unemployment assistance, rose by 36,000 to 1.473 million in the week ended August 27th.

The four-week moving average of continuing claims also crept up to 1,439,000, an increase of 10,750 from the previous week’s revised average.

Last Friday, the Labor Department released a more closely watched report showing employment in the U.S. increased roughly in line with economist estimates in the month of August.

The report showed non-farm payroll employment rose by 315,000 jobs in August after surging by a revised 526,000 jobs in July.

Economists had expected employment to increase by about 300,000 jobs compared to the jump of 528,000 jobs originally reported for the previous month.

The unexpected uptick by the unemployment rate came as the labor force increased by 786,000 persons, more than outpacing the 442,000-person growth in the household measure of employment.