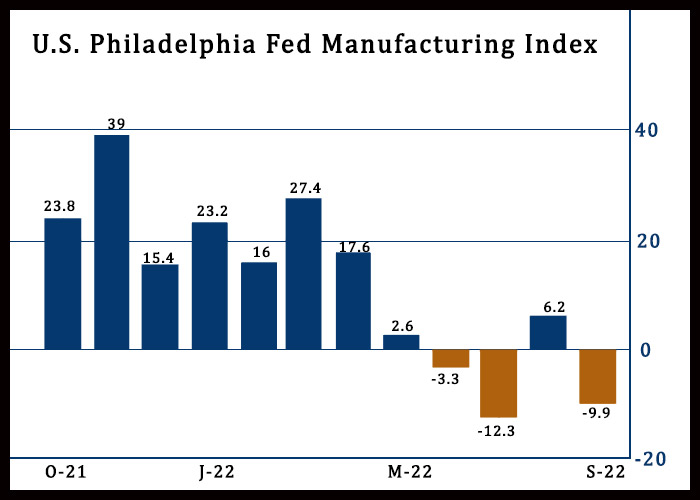 Philadelphia-area manufacturing activity unexpectedly contracted in the month of September, according to a report released by the Federal Reserve Bank of Philadelphia on Thursday.

The Philly Fed said its current general activity index slumped to a negative 9.9 in September from a positive 6.2 in August, with a negative reading indicating a contraction in regional manufacturing activity. Economists had expected the Philly Fed index to drop to a positive 2.8.

The much bigger than expected decrease by the headline index partly reflected further contraction in new orders, as the new orders index tumbled to a negative 17.6 in September from a negative 5.1 in August.

The shipments index also dove to a positive 8.8 in September from a positive 24.8 in August, indicating a notable slowdown in the pace of growth.

The number of employees index also slid to a positive 12.0 in September from a positive 24.1 in August, although a positive reading still indicates job growth.

Looking ahead, the Philly Fed said expectations for growth over the next six months were subdued, as the future general activity index improved but remained negative.

The diffusion index for future general activity climbed to a negative 3.9 in September from a negative 10.6 in August, remaining negative for the fourth straight month.