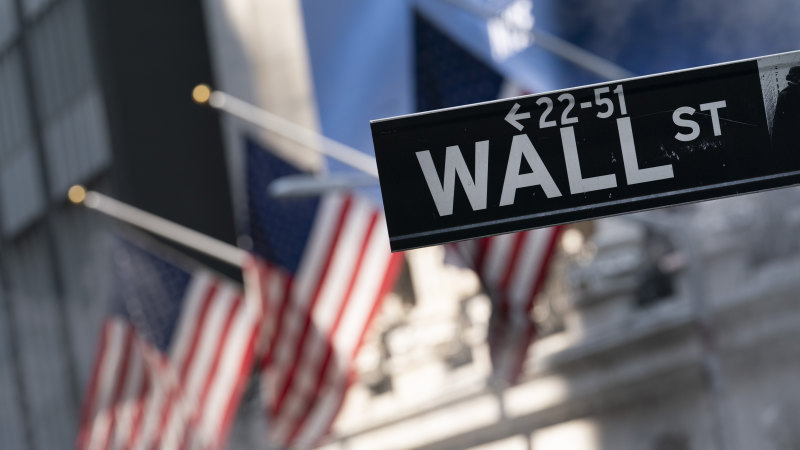 The world, apparently, has a new financial giant.

AMTD Digital, a Hong Kong-based company that listed in New York less than three weeks ago, has surged so much that the combined market value of its Class A and Class B shares hit more than $US310 billion ($446 billion) this week. That means the firm — which develops digital businesses, including financial services — is worth more than Bank of America, Morgan Stanley and Goldman Sachs, despite reporting just $US25 million in revenue for the year ended April 2021. 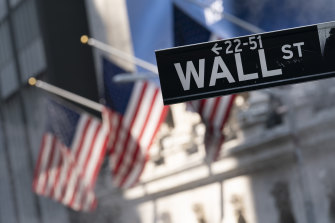 The world, apparently, has a new financial giant, surpassing Wall Street giants in market value. But it may be short-lived.Credit:AP Photo/Mark Lennihan

While those firms have a long list of shareholders, AMTD Digital has a convoluted ownership structure that ultimately leads to one key name: Calvin Choi, an ex-UBS banker, who’s currently fighting an industry ban in Hong Kong for failing to disclose conflicts of interest.

Despite that, Choi was on the floor of the New York Stock Exchange on July 15, ringing the bell as shares of AMTD Digital were about to begin their upward journey. They’re since up more than 14,000 per cent from the initial public offering price of $US7.80 , even after a 50 per cent retreat on Wednesday.

It’s a mystery why the stock has surged, though some analysts have pointed to its tiny public float. It’s also not clear why investment bank AMTD Idea Group, another stock under the AMTD Group umbrella, has joined in the rally, soaring 525 per cent between July 15 and Tuesday’s close. That stock was the fourth-most-bought company on Fidelity’s trading platform on Wednesday, indicating that it’s become a favourite of retail traders, despite sliding 9.7 per cent on Wednesday.

AMTD Digital didn’t immediately reply to a request for comment. It said in a statement on Tuesday that it’s monitoring the market for any trading abnormalities and doesn’t know of any “material circumstances, events, nor other matters” that could be affecting the stock price.

Choi joined AMTD Group in 2016 as chairman and chief executive officer after spending five years at UBS. Created in 2003 with backing from Li Ka-shing’s company CK Hutchison Holdings, it’s the parent of AMTD Digital and AMTD Idea Group, which is listed both in Singapore and the US.

AMTD Idea also has well-known backers. Century City International Holdings., owned by members of Hong Kong’s real estate tycoon Lo family, holds a 5.8 per cent stake in the firm. A unit of Morgan Stanley invested in a funding round in 2019.

Choi, a Hong Kong native and Canadian citizen who studied accounting at the University of Waterloo, is the sole owner of a vehicle that controls 32.5 per cent of AMTD Group. His father is also involved after a company that belongs to him acquired a majority stake in it in 2015. AMTD Group owns 50.6 per cent of AMTD Idea, which in turn owns 88.7 per cent of AMTD Digital.

‘There are those who envy and [are] jealous, and those who are cold-eyed and mockers, and malicious, there are slanderers.’

Choi has been a fixture at annual financial technology events in Singapore in recent years. At an event co-organised by the Monetary Authority of Singapore, AMTD Group was among the biggest sponsors for three consecutive years through 2019, when Choi spoke on panels with executives including Standard Chartered Chief Executive Officer Bill Winters.

Earlier this year, though, Hong Kong regulators banned Choi from the securities industry for two years for failing to disclose conflicts of interest in transactions he worked on while at UBS. He’s appealing the decision. China Minsheng Investment Group, an AMTD Group investor that installed Choi as CEO, turned against him and at one point placed banners in Hong Kong’s central district denouncing him.

Separately, Hindenburg Research has blasted AMTD Group. In an April 2021 report on Ebang International Holdings, a China-based crypto company, the short seller said its track record as an underwriter was “abysmal,” with 87 per cent of its US IPOs resulting in losses.

“There are those who envy and [are] jealous, and those who are cold-eyed and mockers, and malicious, there are slanderers,” he said. “However, entrepreneurs must insist that development is the last word.”

AMTD’s surge has those from Hong Kong to New York speculating about what, if anything, is behind the moves in the stock. One explanation is that only a small portion of its shares are available for trading.

“The stock is highly overvalued,” said Thomas Nip, a research analyst at Valuable Capital in Hong Kong. “The low free float in the company’s shares means it will be easier for big shareholders to push up the stock price.”

While the recent rally in the US was reminiscent of the retail trading mania that drove up shares of companies including GameStop last year, some Reddit and Twitter users appeared baffled by the gains, denouncing claims that the sub-reddit WallStreetBets was behind the moves. At one point on Tuesday, AMTD Digital’s market value rose above $US400 billion, while AMTD Idea shares surged as much as 520 per cent.

“Given the speed of its ascent, I have a feeling this one will nosedive,” said Oktay Kavrak, director at Leverage Shares. “I hope investors take profits along the way as the inevitable crash will send HKD back to relative obscurity.”