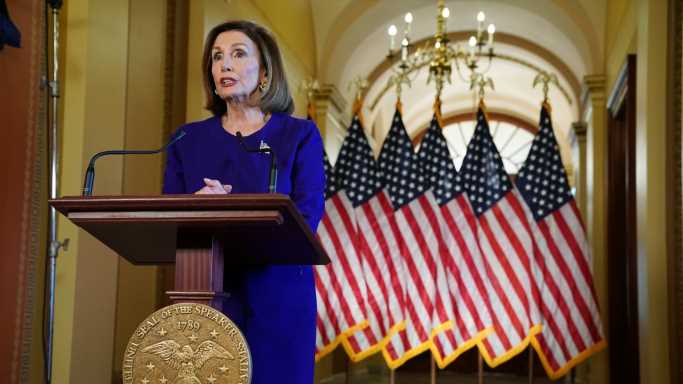 Markets fell shortly after Tuesday’s opening bell amid rising geopolitical concerns between the United States and China. The Dow Jones Industrial Average was leading the charge lower, down nearly 1%, with the Standard & Poor’s 500 and Nasdaq Composite each down 0.6%.

Much of the tension stems from U.S. speaker of the House of Representatives, and second-in-line to succeed the president, Nancy Pelosi ,making a visit to the island nation of Taiwan. China contests Taiwan’s legitimacy and contends that it is in fact part of the People’s Republic of China. While Pelosi’s trip to East and South East Asia has been in the works for some time, the details on a visit to Taiwan were hazy at best.

Many believe that Pelosi is there to negotiate with Taiwan in regard to developing semiconductor technology within the United States, with a focus on Arizona. Keep in mind that the Senate just passed the CHIPS and Science Act to provide $52 billion to fund semiconductor manufacturing within the U.S., so there may be some brokering or inside baseball going on as well.

When news came to light that Pelosi would in fact be making the trip, members of Chinese media outlets speculated that there would be grave consequences for this action, some going as far as to suggest China would shoot down the plane which would be an act of war. The United States has responded by moving Navy vessels to cover a potential flight path.

For now, everyone is holding their breath and waiting to see who will blink first in this staring match of global rivals.

24/7 Wall St. is reviewing additional analyst calls seen on Tuesday. We have included the latest call on each stock, as well as a recent trading history and the consensus targets among analysts. Note that analyst calls seen earlier in the day were on Amazon, Chevron, Comcast, First Solar, Meta, Starbucks and more.

Farfetch Ltd. (NYSE: FTCH): Cowen downgraded the online luxury fashion retail platform to a Market Perform rating from Outperform and cut the price target to $9 from $11. The 52-week trading range is $6.52 to $50.11, and shares traded more than $8 apiece on Tuesday.

Kodiak Sciences Inc. (NASDAQ: KOD): Citigroup downgraded the biopharmaceutical company to a Sell rating from Neutral with a $6 price target. The 52-week trading range is $4.90 to $131.97, and shares were trading near $8 on Tuesday.

Pinterest, Inc. (NYSE: PINS): Susquehanna upgraded the image-sharing and social-media service to a Positive rating from Neutral and raised the price target to $35 from $22. The stock traded near $23 on Tuesday. The 52-week trading range is $16.14 to $66.00.

Transocean Ltd. (NYSE: RIG): Capital One upgraded the offshore drilling contractor to an Overweight rating from Equal Weight. The stock traded near $4 on Tuesday, in a 52-week range of $2.32 to $5.56.

Snowflake Inc. (NYSE: SNOW): BTIG Research downgraded the cloud computing–based data warehousing company to a Neutral rating from Buy. The 52-week range is $110.26 to $405.00. Shares traded near $148 apiece on Tuesday.

Teladoc Health, Inc. (NYSE: TDOC): Berenberg downgraded the telemedicine company to a Hold rating from Buy with a $35 price target. Separately, Cowen downgraded the stock to a Market Perform rating from Outperform and cut the price target to $34 from $58. The 52-week trading range is $27.38 to $156.82, and shares traded near $36 apiece on Tuesday.