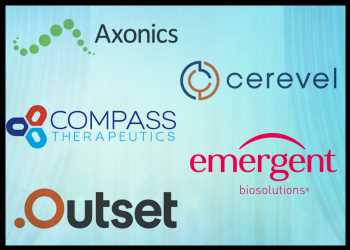 The following are some of the healthcare companies that reported their financial results for the quarter ended June 30, 2022, yesterday.

Axonics Inc. (AXNX), which reported a narrower loss on 50% revenue growth in the second quarter ended June 30, 2022, has boosted its outlook for the year yet again.

The company is involved in developing and commercializing novel products for the treatment of bladder and bowel dysfunction.

Analysts polled by Thomson Reuters were expecting the company to incur a loss of $0.54 per share on revenue of $59.6 million.

Looking ahead to full-year 2022, the company now expects revenue of $253 million compared to prior revenue guidance of $238 million and well above the analysts’ consensus estimate of $238.74 million. This is for the second time that the company has increased its 2022 revenue outlook. Revenue was $180.3 million in full year 2021.

Cerevel Therapeutics (CERE), which is developing drugs for schizophrenia, Alzheimer’s disease psychosis, epilepsy, and Parkinson’s, has five data readouts lined up for next year.

The company’s drug candidate Emraclidine is under a phase II program in schizophrenia – consisting of two trials – EMPOWER-1 and EMPOWER-2. Data for both trials are expected in the first half of 2024.

Tavapadon, in development for the treatment of Parkinson’s disease, is under three phase III trials, dubbed TEMPO-1, TEMPO-2, and TEMPO-3, with the corresponding open-label extension trial, named TEMPO-4.

Data readouts from the Tavapadon phase III program are expected beginning in the first half of 2023.

CVL-871, in development for treatment of dementia-related apathy, is under a phase IIa exploratory trial, with data anticipated in the first half of 2023.

Compass Therapeutics Inc. (CMPX) has plans to initiate a couple of clinical trials in the coming months.

The company’s lead drug candidate is CTX-009, a bispecific antibody, with potential in the treatment of colorectal cancer and gastric cancer.

A phase 2/3 trial of CTX-009 and chemotherapy drug Paclitaxel in biliary tract cancer is anticipated to begin in the United States this quarter (Q3).

A phase II trial of CTX-009 as a monotherapy in advanced colorectal cancer is on track to begin next quarter (Q4).

Next in the pipeline is CTX-471, a fully human monoclonal antibody, under a phase 1b study in patients with advanced solid tumors who have received at least one checkpoint blocker containing regimen. This study is expected to be completed next quarter.

A combination study of CTX-471 and a commercially available PD-1 blocker is also on track to be initiated in Q4 2022.

Emergent BioSolutions Inc. (EBS), which has resumed providing financial guidance, expects total revenue for full-year 2022 to decline 30% to 36% over the prior year.

For full year 2022, the company expects total revenue to be in the range of $1.15 billion to $1.25 billion compared to $1.79 billion reported in the prior year. The company has forecast adjusted bottom line for the year in the range of a loss of $15 per share to earnings of $10 per share. The adjusted net income was $6.02 per share in 2021.

The Wall Street analysts’ consensus estimate is $1.54 per share for earnings and $1.23 billion for revenue.

Outset Medical Inc. (OM), which has resumed shipment of its Tablo Hemodialysis System shipments for home use, has forecast revenue growth for 2022 in the range of 2% to 7% over the prior year.

A shipment hold on the distribution of its Tablo Hemodialysis System for home use was implemented by the company in June of this year, pending the FDA’s review and clearance of a 510(k), which the company submitted for changes made since the device’s original March 2020 clearance.

Tablo was initially cleared by the FDA for use in an acute or chronic care facility in September 2014 and for patient use in the home on March 31, 2020.

TransMedics Group Inc. (TMDX), which reported 151% revenue growth in the second-quarter ended June 30, 2022, has raised its financial outlook for the year.

Revenue for the second quarter of 2022 jumped to $20.5 million from $8.2 million in the year-ago quarter, and came in above the analysts’ consensus estimate of $16.27 million.

The company attributed the 151% revenue growth mainly to continued increase in commercial sales of its OCS Heart and OCS Liver systems in the United States.

TransMedics has boosted its revenue outlook for 2022 to a range of $67 million to $75 million from its prior guidance range of $59 million to $65 million. Wall Street analysts are expecting revenue of $66.97 million for this year. Revenue was $30.3 million in full-year 2021.

The company ended the second quarter of 2022 with $58.1 million in cash, cash equivalents, and marketable securities.